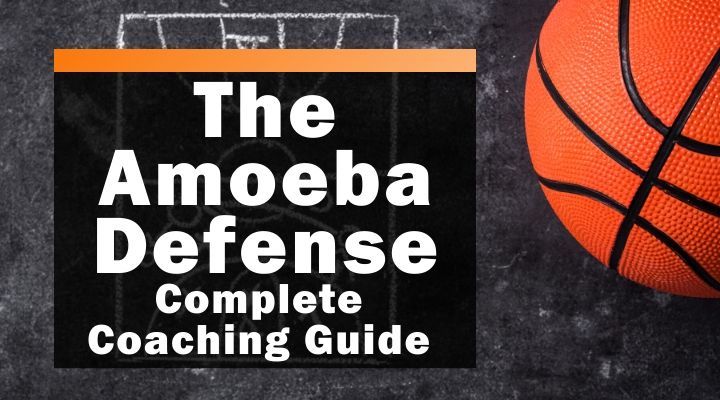 As coaches, we’ve all been there:

You organize what you believe is a perfect defensive game plan to stop your opponent.

Everything goes well in practice and your team is confident entering the game.

However, once the game starts, things DON’T go according to plan.

Your players are getting beat off the dribble...

The opposing post players are having their way inside...

Do you simply hope things get better and your opponent starts missing?

Or do you make a change?

Having a “change-of-pace” defense ready is great for these situations.

Even a few possessions of something different can catch your opponent off-guard and change the momentum of the game.

Coach Jerry Tarkanian’s “Amoeba Defense" is an excellent option as a defensive changeup.

This is an aggressive zone defense that seeks to disrupt offensive flow and force turnovers.

Who Should Use the Amoeba Defense:

1. Teams Looking for a Change-of-Pace Defense

This defense can change the game because of its unconventional nature.

It can serve as a great complement to your base man to man or zone defense.

Playing the guard spots in the Amoeba requires a lot of quick movements.

These players should be good defenders and ready to run.

The Amoeba requires the defensive center to cover corner passes.

If your team has a lumbering post player who cannot guard on the perimeter, this defense may not work for you. However, an agile center can excel in this defense.

One reason the Amoeba works is that few teams use it.

There is an advantage in being the only team in your league or area playing a particular style.

You can confuse opponents with the unconventional zone slides utilized by the Amoeba.

Even if you only use the Amoeba for a few possessions each game, you will still force opponents to spend practice time preparing.

If an opposing coach knows you run the Amoeba, he or she will undoubtedly allot time on their practice plan to trying to solve it.

While you can spend your practice working on your own offense and defense, the other team must worry about adjusting to you.

The gambling nature of the Amoeba can help your team create turnovers.

This is a defense that forces the action.

Because it is aggressive and different, your players will love playing the Amoeba.

This player buy-in will make it even more effective.

1. Will Give Up Some Layups

Like with all aggressive defenses, you must assess the risk/reward ratio for your particular team when considering the Amoeba. You will occasionally give up some easy baskets.

If you prefer a more conservative defensive style, the Amoeba may not be for you.

You probably don’t want to use the Amoeba as your primary defense.

However, running this defense effectively does require consistent practice time.

It's important to consider if this extra time is worth the potential reward for a secondary defense.

I believe the potential value the Amoeba has as a change-of-pace defense is worth the practice time it needs.

This is a defense that requires sprinting.

Although it is a half court defense, it can wear out players because of the energy required to do it well. You may need to substitute more frequently, particularly in the guard spots. 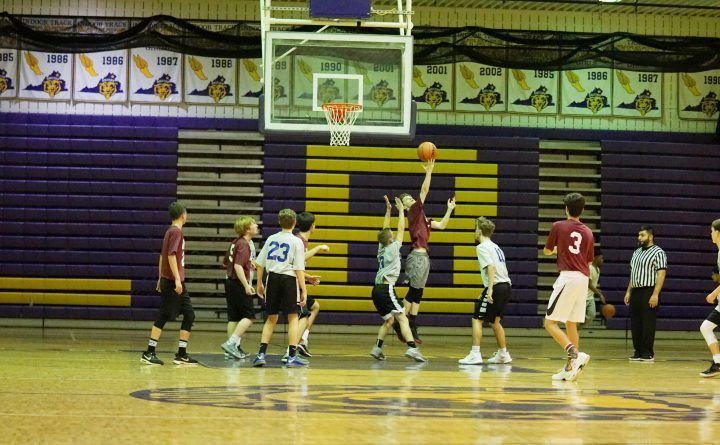 How to Run the Amoeba Defense:

1. Basketball at the Top of the Key 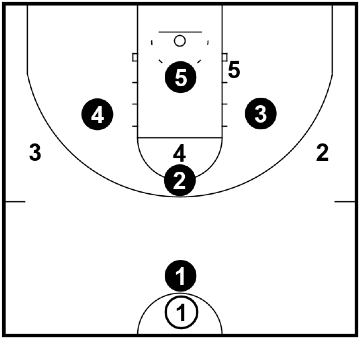 The top defender (X1) pressures the ball-handler as they cross the half court line.

Your two best defensive guards should play in the X1 and X2 positions.

The high post should be denied, so X2 fronts any player who comes to the middle.

The center defender (X5) guards the rim when the ball is on top; his or her job is to be as low as the lowest offensive player.

2. Basketball on the Wing

On a pass to the wing, X2 takes the first pass to either side.

X1 immediately dives to the high post, replacing X2. This drop is crucial because most teams will look to attack the high post right away. It’s X1’s job to steal this pass.

With the ball on the wing, X1 plays “hand in the high post.”

This enables him or her to take away the high post and get back out to Player 1 if the ball is passed back to the top.

X5 must front the low post with the ball on a wing.

If the wing player dribbles the ball, X3 comes up to trap along with X2.

The defense takes away all dangerous passes by fronting the low post and denying the high post.

3. Basketball in the Corner

Here is where the defense becomes unconventional...

If a pass is made to the ball side corner, X5 rotates out to cover.

This temporarily leaves the low post open, so the wing player (X3 in this case) sprints down to front the post or steal a post entry pass.

Now we have X5 guarding the ball, X2 denying a pass back to the wing, X3 fronting the post, and X4 and X1 on the midline ready to help or cover skip passes.

X3’s drop to the post is a key element of forcing turnovers in the Amoeba.

When the offense sees X5 leave the post, it will immediately look to get the ball inside.

X3 should anticipate this pass and get a steal.

If the ball is passed back to the top, X1 takes it and the defense resets.

5. Skip Pass to the Wing

X2 now takes away the high post, and X1 denies the reversal pass.

X3 comes across the lane and guards the post.

Many teams will attack the Amoeba using a two-guard front.

This creates another unconventional aspect of this defense:

If the offense plays two guards in the slots, X1 and X2 match up with them.

Because this vacates the middle, X5 must slide up to take the high post. Rather than front this, X5 plays behind because there is no back side help.

If the offense passes to the high post, a triple-team occurs.

X3 and X4 then look to rotate to steal the next pass.

This is effective because many teams play unskilled players, who are more likely to panic under pressure, in the high post.

If the ball is passed out of the high post, the closest wing takes it (X3 in this case).

Now we are in our regular positions with the ball on the wing.

X5 slides down to the basket, X1 denies a pass out, X2 plays “hand in the high post,” and X4 is  responsible for skip passes.

The Amoeba defense is an interesting way to confuse your opponent, force turnovers, and seize momentum in a game.

You may be the only team in your area showing this look, meaning your opponents will have to prepare for something they have never seen before.

Be prepared for those situations when your game plan isn’t working and you need to adjust to swing the game back in your favor!