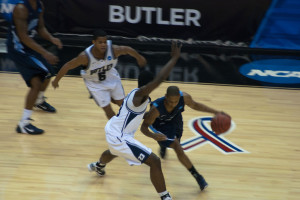 Remember all the times one of your big men got switched onto a guard and they isolated on the perimeter? The guard probably got into the lane for an easy score right? This was probably because your big man was lost and had no idea what to do.

When bigs get switched onto guards, barely any of them know the correct way to play them. This drill will give you the chance to teach them how to use their length and
get them used to playing defense on the perimeter.

1. The guards must create space and get a good shot.

2. The big men must contain the guards and defend the shot.

Set Up: You will need 4 people that play big men on your team. Put them on the free-throw line extended on both sides of the court on both ends of the court. Then get the rest of your team to line up in front of them. 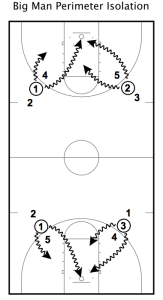 1. Make sure you only run one group at a time on each end of the floor. If you run them at the same time they will get in each others’ way.

2. Start the drill by having a group at each ends of the court go first. The guard will either get a score, or the big man will get a stop.  Then they clear out and the other group goes. There is a scoring system which I talk about after these instructions.

2. Once a guard has played against one of the bigs they move onto the next one. Make sure you have an order system so that a large group of people aren’t backed up in the same line. I recommend telling the players to rotate clockwise. As long as your players don’t deviate from the system, the groups should stay even the entire drill.

5. Each guard plays against each big man twice. So they do two full rotations of the groups.

Assuming that they all stick to the rules of the drill and play each other twice the drill should be even for all players. Who ever gets the most stops from the big men is the winner, and who ever scores the most points from the guards is the winner.

Do you have any suggestions on how to improve this drill? Let me know in the comments.