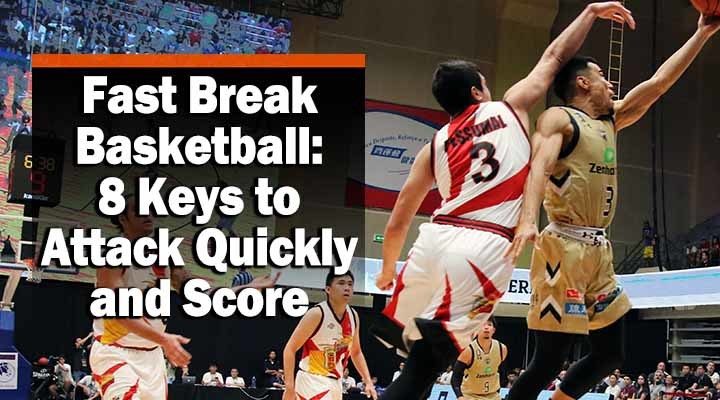 Scoring is difficult at all levels of basketball.

Even with good players and well-considered set plays, it can be hard to score in the half court against a solid defensive team.

This is even more true at the youth, middle school, and high school levels.

The concept of the fast break is simple:

Pushing the ball down the floor to earn a numbers advantage, making it easier to score before the defense gets set up.

Consistently converting on fast break opportunities is a challenge and must be a daily emphasis in your practices to be done well.

Why the Fast Break is Important

There are several reasons why it's important to utilize the fast break:

a. Never allows the defense to rest

Playing fast break basketball is crucial because it never gives your opposition a chance to slow down and catch their breath.

Teams who constantly push the ball every chance they get will wear out the defense and force them to make defensive mistakes.

b. Transition defense is HARD!

Teams who choose to walk the ball down the court do not exploit this potential weakness of their opponents.

c. You will have poor shooting nights

Generating fast break layups is one way to win even on those games when your jump shots aren’t falling.

If you always rely on your team shooting a high percentage, that will be many games where you'll be disappointed.

Great teams expect to score a high percentage of their points before the defense is organized.

For youth and middle school teams, all players should get significant playing time.

At the high school level, it is important to develop some underclassman bench players as well.

By playing fast, there will be more possessions and more opportunities to use your full roster. 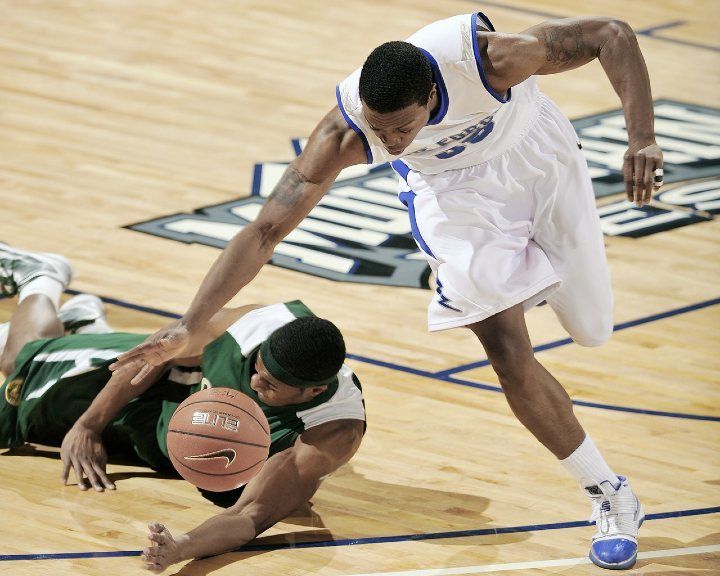 The first key to being an elite fast breaking team is to develop a great defense.

I recommend man-to-man or Pack Line.

While it’s possible to push the ball off made baskets, it's MUCH easier to run off a stop. If you constantly have to inbound the ball, you won’t maximize your potential as a fast break team.

It’s great to push hard following a defensive rebound, but it’s even better to run following a live-ball turnover!

Motivate your team to defend by showing them the correlation between defensive stops and easy opportunities in transition.

2. Decide Who Will Push the Ball

One decision coaches must make is to figure out which players should push the ball in transition.

There are two main options:

Both options have pros and cons.

Allowing anyone to lead the break is inherently faster, but could lead to some turnovers as weaker ball handlers will be asked to make more decisions.

It may take a bit longer to outlet the ball to your point guard, but this option ensures a strong decision-maker is the one pushing the ball.

Neither is right or wrong; however, I would encourage youth coaches to give all players chances to handle the ball.

Turnovers may increase, but your whole roster's development will benefit.

Probably the most important aspect of transition offense is instilling a fast break mindset in your players.

I recommend the term “RACE”.

We want to race down the court every possession to explore a potential advantage -- but this doesn't mean we should always shoot quickly.

We would love to create a great shot immediately, of course...

But we know that won't always happen.

At the end of the day, the important part is teaching your players to sprint their lanes every time.

If your team runs hard every time, it may create a transition advantage every third possession.

If your team walks the ball up every time, it will NEVER create a transition advantage.

It's better to habitually sprint the floor, seeking an opportunity.

4. Pass Instead of Dribble

A simple way of improving your transition game is to pass the ball across half court as much as possible.

We all know that the ball moves faster with the pass than with the dribble.

Use this to your advantage by developing in your team the habit of passing up the sideline to gain separation from the defense.

Everyone should know where to run in transition. Most teams will assign a point guard, a rim-runner, a trailer, and two wings.

While you should allow all players to push if they have space, the best case scenario is to get the ball into your point guard's hands immediately.

They can then look to pass the ball up the sideline to a wing.

If the ball-side wing is not open, your point guard can “slice” through the middle of the court and look at the other wing.

This is often an effective pass because defenses tend to load to the ball side, leaving the weak side of the floor open.

In a perfect world, our fast break creates a 1-on-0 uncontested layup.

However, good defenses will rarely allow this.

If we can create one of these obvious advantage situations, we want to score before more defenders can get back.

Many players are indecisive in these situations. Drill these scenarios regularly to instill an aggressive mindset in players. 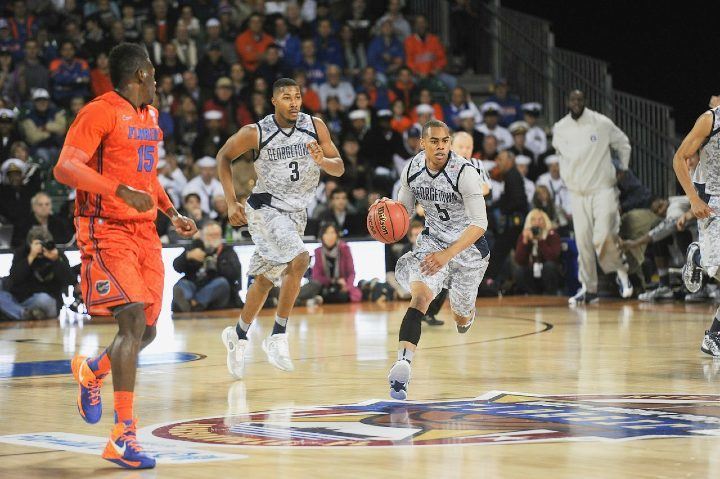 Although we prefer to pass the ball ahead, there will be times when players must attack off the dribble in transition.

Teach your players “breakout dribbles” in these situations.

If a player catches in space with no teammate ahead of them, they should take big dribbles to advance the ball as quickly as possible.

Teach “chest to the floor” in a sprinter’s stance, and encourage players to take big crossover dribbles.

This maximizes distance and makes it harder for trailing defenders to backtap the dribble.

7. Get the Ball Into the Paint

A crucial element of a fast break attack is helping your players understand WHY your team is choosing to play fast break basketball.

One of the key reasons is to get the ball into the paint.

PGC Basketball uses the term “hunt the paint”, which immediately puts players into an aggressive mindset.

There are several ways to attack the paint.

a. Rim-runner sprints the floor to get under the hoop

Tell your perimeter players that if a rim-runner has two feet in the pain, they MUST look to pass them the ball.

To motivate your post players to run the floor hard, they have to know that your guards are looking for them.

b. Perimeter players attack advantages off the dribble

If your point guard passes ahead to a wing player and the defense gives a long closeout, encourage them to shot fake and hunt the paint before the defense gets organized.

8. Flow Into Your Half-Court Offense

The best transition teams are able to flow from their fast break into their half court offense.

You don't want your team to fast break and then have to pull the ball out to set-up a play.

Against good teams you won’t get a great number of layups in transition, but you can use a small advantage created by racing down the floor to create a bigger advantage later in the possession.

If you don't have obvious numbers (2-on-1, 3-on-2), there are several options you have to flow into:

Here are two you can use:

Pistols is a common NBA action.

It's triggered by a wing entry, either off the pass or a dribble handoff. 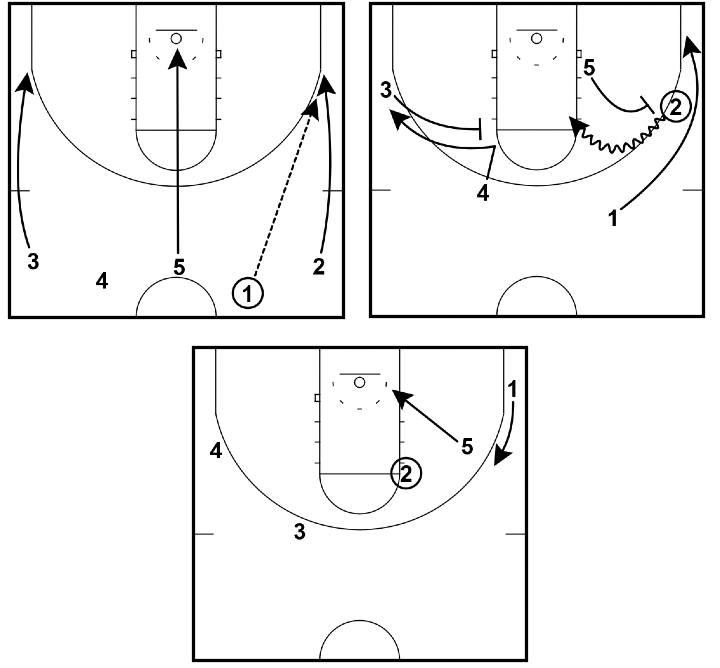 Run Klay when the ball is in the slot.

A “Klay Cut” – named after Klay Thompson - is our term for what some coaches call a “ghost screen” or a “running slip.”

In the diagram below, 4 runs at 1, fakes a ball screen, but slips into an open area. This action seeks to confuse the defense and could result in a free drive for 1 or open up 4 for a shot.

Both Pistols and Klay flow into the 4-out motion offense.

Gain an advantage with your fast break, maintain it by sprinting into Pistols or Klay, and then continue into your motion.

There are numerous fast break drills you can utilize with your team.

Although unfortunately, there are no “magic” drills that will immediately morph a team into an elite transition squad.

Rather, success if found more by emphasizing transition scoring in all elements of practice.

Some young coaches practice in the half-court far too much.

You must remember that basketball is a game of constant transition. And the easiest way to improve transition play is to transition a lot in practice.

Here are some fast break drills that we have found to be helpful in improving our transition play.

This is a very simple concept, but it's great for helping your players develop a fast break mindset.

And even if you aren’t a huge transition team, it is an excellent conditioner early in the season.

Score the game as you normally would with one exception:

Award a point every time the offensive team gets the ball below the foul line in 5 seconds or less.

If possible, assign an assistant coach or parent the task of counting down from five on every change of possession.

This rule encourages the offense to SPRINT and look to pass ahead if they want the potential extra point.

Award this point regardless of if the offensive team scores on that possession.

If the offense gets the ball below the foul line in 5 seconds and passes to the rim-runner for a layup, that would be a 3-point possession.

This game can be played 3-on-3 or 4-on-4, but 5-on-5 allows you to work on the Pistols and Klay options when your team doesn't score in primary transition.

Here's how it works:

Two teams play 5-on-5, with a third team standing on the sideline.

(if you have 20 or more players, four or more teams can play)

Play until someone scores.

Team 1 then pushes the ball the other direction as Team 3 sprints on.

The team entering must touch half court and communicate their matchups as they quickly get into their defensive positions.

This is a fun game that develops offensive and defensive transition, while also serving as a great conditioner.

If you prefer to increase individual accountability, you can play with fewer players. For example, 3 on 3 on 3 makes it even more obvious who is not executing in offensive and defensive transition.

Committing to play fast break basketball can benefit any team.

Even if your team is not the fastest on your schedule, the habit of advancing the ball quickly to explore scoring opportunities will keep pressure on the defense and get your team playing together.

I hope that some of these concepts will help get your team off and running this season!