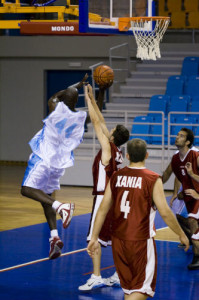 All coaches have been in this situation: We’re in the middle of a game and there’s a post player on the other team that’s completely dominating us. We’ve tried numerous players on them but it’s no use. They’re getting whatever shots they like in the paint.

This situation sometimes leaves us with only one option: sending help.

If we can’t stop them with one player, we need to use two. A double-team.

Before we talk about which players we can use to trap the post player, there are a few important things we need to remember about doubling the post effectively…

If your players dig at the ball and try to get steals it will usually lead to fouls. Instead, on the trap your players should be looking to deflect the pass out of the post and not let the post player score. Remember, fouling negates hustle.

When we trap the post player our goal is to stop them from scoring and make the pass out of the post difficult. By heavily denying the ball-side pass, it forces the post player to make a difficult pass across the court and through traffic. This is where a lot of our steals will come from. We’re forcing the post player to become a passer rather than a scorer.

While fronting the post can be a smart option in some situations, it’s not if you want to trap the post. A smart post player will get angles resulting in quick and easy scores at the basket if we do this.

Instead, half-front the post and play behind. Force the post-player as far away from the basket as possible and then on the flight of the ball get behind them.

In all the doubling options described later in the post the help will come to the middle. The post players immediate defender must angle them towards where the help is coming from.

This option should be used if the team you’re playing against has a weak offensive player that will be consistently on the court.

Have a designated player to play on the weak offensive player and that player double teams the post every time. They must have a high basketball IQ and the better athlete they are the better since they will have to quickly scramble back to their player.

The big-man guarding the post must force the post player towards the middle on the catch because that’s where the help will come from. The designated player should always be hedging into the paint getting ready to trap quickly.

It doesn’t matter where they are on the floor at the time, they must go and double. And who will be left open? The worst offensive player on the court. This will usually be a big win for the defense getting the ball out of a great post players hands and into the hands of whoever you choose since they will be wide open. Make sure it’s someone that can’t consistently shoot the three-point shot.

This tactic is extremely easy for your players to understand since only one person has the responsibility. 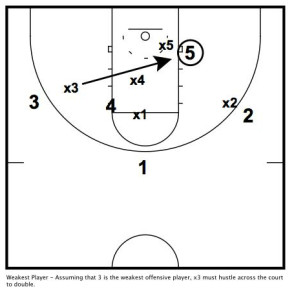 Doubling from the Weakest Player

There aren’t any specific rotations when using this tactic. The reason you want to use this is to get the ball into the weakest offensive players hands so rotating to cover isn’t necessary unless they’re in the paint, in which split line should be there to help.

The trapping defender on this player should be smart enough to quickly rotate back to their player if it’s passed to them. We aren’t too concerned about them being open on the pass since we want to force them to shoot or make a decision.

Tactic 2 – Double from the Lowest Defender

Another option a coach has is to send help from the lowest weakside defender. I have mixed views on this option and don’t recommend using it.

The good aspects is that it will often be the other big post defender that comes to help so you have two sets of long arms disrupting the post player and looking for deflections. Also the double team is only a couple of steps away so the double can be set quickly.

The problem I have with this option is that if the post player is a decent passer and our rotations down aren’t quick enough, it can result in a lot of easy paint catches and layups for the other team.

The second lowest defender must immediately drop down to cover both their player and the doubling defenders player. This requires them to turn their head if they want to see both players immediately. Whereas if the double is coming from the top (I’ll talk about that in the next option), the defender can already see both players they need to watch. 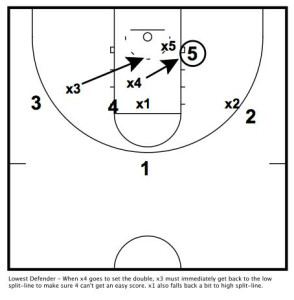 Doubling from the Lowest Defender

The defender of the second lowest offensive player must IMMEDIATELY drop back to the low split-line to protect the paint and watch the lowest defender. The defender at the top of the key must drop back the the high split-line.

Both players are responsible for the three offensive players on the weak-side of the court and must scramble if a pass is made to any of them. They must look to get steals off bad passes from the post.

Tactic 3 – Double from the Top Defender

This is my favourite tactic to use when playing a level of competition where the players on the opposition can consistently knock down the three-point shot.

The reason being is that by doubling the post with the top player the lowest defender won’t have to change positions, and the wings defender can already see both players he must watch. The less movement the defenders needs to make to rotate the better.

On the flight of the ball into the post the highest defender must turn and sprint to double the post player. 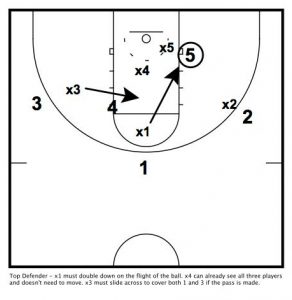 Doubling from the Top Defender

Like the tactic above, both players are now responsible for the three offensive players on the weak side of the court and must scramble once the pass is made. Both are looking to get steals off bad passes from the post player.

Tactic 4 – Double from the Passer

One of the main rules when double-teaming the post is to stop the post player from making a simple pass to the strong side wing player. We want to force the big to make a tough pass which will hopefully result in them turning the ball over. That doesn’t work with this double-team. This option allows the big to make the easy pass out of the post.

The players passing the ball to the post player will usually be the strong-side guard. Double-teaming off this pass is a poor option because committing to the trap requires the guard to take his eyes off his player and there are not rotations to cover if they get open for the three or cut to the basket.

There aren’t really any smart rotations we can make since the pass will usually be entered from the ball-side guard. I’ve been at clinics where they’ve talked about rotating the defender from the top across to guard the ball-side guard but I’m not a big fan of that.

This tactic should only be used against teams that can’t shoot the three-point shot so the guard doubling should return to their player once the ball’s been passed out.

Now, Over to you…

Which is your favorite tactic to use when doubling a great post player?

Or, if you use a different technique, share your tactic in the comments so we can all learn from it!