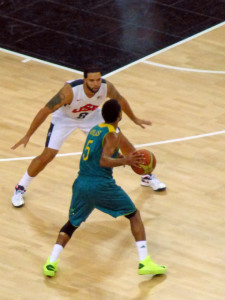 If you follow me on Twitter (you should be), you would know I’m a big, big fan of Patty Mills. The intense sharp-shooter recently helped the Spurs etch their name in the NBA history books with a 4-1 win over the Miami Heat in the NBA Finals.

Why do I admire him so much? Sure the fact that we’re both Aussies has something to do with it, but it’s his attitude and work ethic that I admire the most.

Let’s face it… kids are out there training to be the next LeBron James. Not an easy task. It’s hard to train yourself to become 6 foot 8, 250 lb, while still being possibly the fastest end-to-end player in the NBA. It’s not a realistic goal for most.

A much more realistic goal is to become the next Patty Mills. He’s average height coming in at 6 foot flat, a modest 185 lb, and while he has lightning quick feet, I believe a lot of his quickness on the basketball court has to do with his work ethic as much as physical gifts.

Much of what Patty has achieved so far in basketball has come down to the preparation and hard work that he’s put in. Hard work that anyone can do. I’m going to share with you 5 tips on how to get there.

1. Work Your Butt Off on the Court

Anyone who watched the NBA Finals series knows Patty is a little rocket on the basketball court. Whether he plays 5 minutes or 25 minutes you know exactly what you’re going to get from him. Tracked by SportVU, he lead all players in this years NBA playoffs with the incredible average speed on the court of 4.9 miles per hour (7.89km/h).

This is a testament to his work rate. He puts in 100% effort each and every time he’s out there.

As I’ve mentioned on Twitter and FaceBook many, many times; effort is a choice. CHOOSE to work hard. It’s up to the players.

2. Sprint Out of the Game on a Sub

This is something that I wasn’t sure whether to include or not… but i figured, coaches love when players do this so much, so why not include it?

Not something that will make you a great player necessarily, but you’ll be a great teammate. Coaches appreciate when you hustle off the court after a sub and don’t sulk about coming out of the game.

Please excuse my memory as I’m writing this a week after the conclusion of the finals, but I vividly remember Patty nailing a big three-pointer, taking a charge on the next play on the defensive end, and then getting subbed out.

What would most players do if they got subbed out after those two plays? Sulk? Whine? Put their head down? Walk to the bench?

Not Patty. As soon as the sub was called he sprinted to the bench hi-fiveing his teammates along the way.

3. Stay True to Your Heritage

“Thank you to everyone for their support from the rural parts in the aboriginal areas on the mainland to the Torres Strait Islanders – Mills said after the game 5 victory.”

I love seeing players that remember when they came from.

Being the son of a Torres Strait Islander, Patty proudly wrapped himself in the flag of his father’s people while the San Antonio Spurs received their championship trophy.

Not only that, Patty is soon releasing a documentary titled “For My People” to bring awareness to his indigenous heritage.

During the 2012/2013 season, Patty was in and out of the Spurs rotation frequently. Coach Gregg Popovich didn’t hold back when explaining the inconsistent and infrequent minutes for the player he commonly referred to as “Fatty Patty”…

“He was a little fat ass. He had too much junk in the trunk. His decision making wasn’t great, and he wasn’t in great shape.”

So what did he do between the end of the 2013 season and the start of the 2014 season? He transformed his body.

With a much-improved diet, Mills drastically improved his body fat percentage bringing it down from 12-13% down to 5.8% making him a much more explosive guard on the court.

5. Be an Incredible Teammate

“His energy has been important all season long. That energy, that team sense he has, has become infectious for everyone” – Spurs coach Gregg Popovich.

If you watched the NBA finals you know what I’m talking about when referring to Patty as a great teammate.

He does all the little things to keep the confidence and team moral high. When you’re not getting many minutes (like he wasn’t last year), those things are important to keep your spot on the roster. Hell, if Patty wasn’t such a good towel waver he might never have had a shot and performing in a final series like he did this year.

I’m a firm believer in today’s game all 1-4’s need to be able to shoot the three. All players being able to spread the floor is near-crucial to success.

Patty has always been a great shooter from the three-point line shooting a career average of .406 from down town.

How do you become such great shooter throughout your career? Put in a lot of work before you get to the big leagues. A lot of work.

If you need help with that check out my shooting workouts page.

“A lot of the time, guys who sit on the bench tend to lose interest or have a bad attitude because they’re not on the court. For me, high-fives and waving towels is a way to stay connected.”

Last but definitely not least, if you’re going to become the next Patty Mills, it’s absolutely essential that you learn how to wave a towel correctly.

1. Work your butt off on the basketball court.
2. Sprint out when a sub is called.
3. Stay true to your heritage.
4. Get in shape.
5. Be an incredible teammate.
6. Become a great shooter.
7. Master the towel wave.

The most important thing I want people to take away from this article is that Patty relied on hard work to get to the NBA. The traits that make him a great player are things that any player can do if they get the right attitude.

What other traits does Patty Mills possess that make him a great NBA player? Am I missing any?