Portland Trailblazers BLOBS and SLOBS from the 2014 NBA Playoffs

For todays blog post I’ve drawn up some of my favourite baseline and sideline out of bounds plays that I’ve seen the Portland Trail Blazers run in the 2014 NBA Playoffs.

Terry Stotts is a brilliant play-caller from out of bounds situations. He has the Blazers run a lot of pick and roll sets for Damian Lillard to attack the ring and create for others.

The blazers also love to get LeMarcus Aldridge on the left block or run plays for Nicolas Batum.

Check out the seven plays below and don’t forget to note down any that you like. You might need them one day! 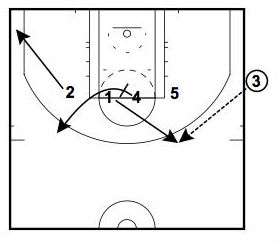 Overview: A basic pick and roll play with shooters well positioned around the three point line.

Setup: Start in a straight line set across the free throw line. 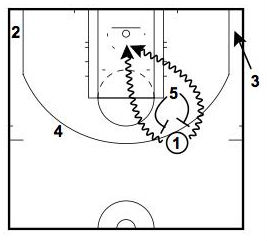 (4). On passing the ball to 1, 3 steps inside the court to the strong side corner.

(5). 5 now makes a read as to which side to screen for 1. Either side is fine depending on 1’s defenders stance and position.

(6). 1 attacks the ring off 5’s screen with shooters positioned evenly around the court ready to catch and shoot. 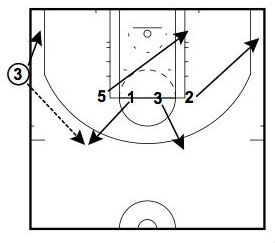 Overview: Point Guard Isolation is a play for when you have a direct mismatch and/or a great playmaker. The Blazers ran this for Damian Lillard with 5 seconds left in the quarter.

Setup: Start in a straight line set across the free throw line.

(6). 1 is now isolated and needs to make a move or drive to get a good shot or create an open shot for a teammate. 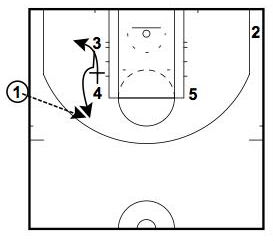 Overview: A basic play that a few teams around the league use and one that Portland had a lot of success with in the playoffs. The key to this play is 5 timing the screen just as 3 is receiving the ball and curling.

Setup: Start in a box formation with 2 already on the weak side three point line in the corner. 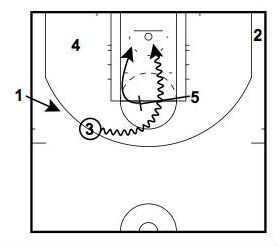 (1). 4 sets a down-screen for 3 and then pops to the strong side short corner for a midrange post up if the pass to 3 is covered.

(3). As 3 is coming off 4’s screen, 5 must time their screen and set a screen around the middle of the court. 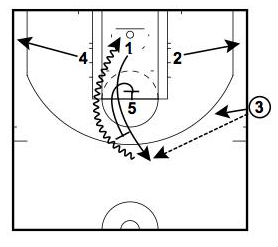 Overview: A re-screen pick and roll for 1 with shooters spaced out around the court.

Setup: Set up as shown in the diagram

(2). 2 and 4 immediately retreat outside the three point line and become spot up shooters for the drive and kick.

(4). 3 steps in the court and becomes another spot up shooter and safety. 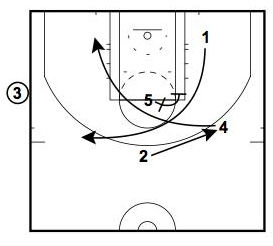 Overview: A play with the option to either post up 4 or run a pick and roll for 1.

Setup: Start as shown in the diagram. 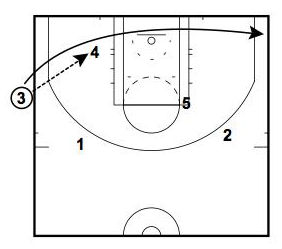 (2). After screening for 4, 5 immediately sets another screen for 1 who cuts to the strong side wing looking to receive the pass.

(3). When the ball is passed to 4 in the post, 3 clears space for the iso by cutting baseline all the way to weak side three point line. 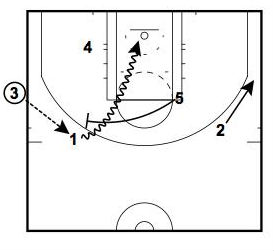 (5). If the ball is passed to 1, 5 immediately sets another screen for 1 to set them up to attack the ring.

(6). After the pass, 3 steps into the court for the possible outlet and becomes safety.

(7). 2 must move along the wing trying to find a good angle if 1 needs to kick the ball out for the shot. 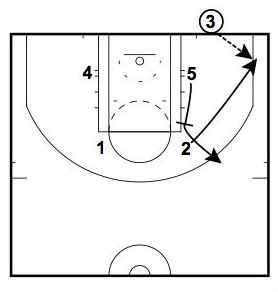 Overview: A quick play to get an open three point shot for the inbounds passer.

(4). 3 walks his defender into the paint disguising that he’s about to explode back the other way.

(6). 3 uses 2’s screen and uses a change of pace to separate from their defender. 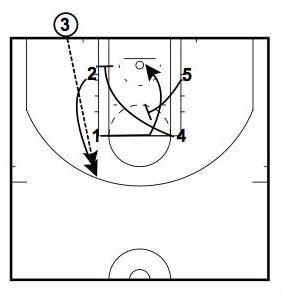 Overview: Another play to get a quick three point shot for 3.

Setup: Start in a box formation.

(1). The play starts by 1 faking to set a screen on 4 and then using 5’s screen for a quick duck in to the basket. 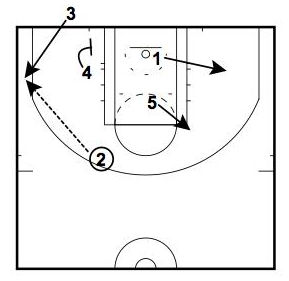 (3). After setting the screen for 2, 4 then sets another screen on 3’s defender who will likely be covering positioned in an attempt to stop the pass into the paint.

(4). 3 shoots out to the 3 point line and receives the quick pass from 2 for the three point shot.

Coaches: I need you to do two things for me…

Every coach has a different style. Every coach prefers running different plays. I want you to go back through the 7 plays and note down any of them that you like.

It’s important for all coaches to have a large playbook that they can go to when they need it. You might like the look of a play but it doesn’t fit your current team… note it down and maybe it’ll perfectly suit a team you have in the future.

2. Very important – I want to hear your feedback.

Drawing up and publishing plays is something I haven’t done often on this blog yet.

I wasn’t sure if people would enjoy them or whether it would be a waste of time taking the time to go through each game, pick out some of my favourite plays, draw them up, and publish them.

In order to keep helping fellow coaches learn the things they want to know, I’d really appreciate it if you took the time to comment below and let me know if you want to see more posts like this in the future.