How to Score Against the Pack Line Defense (7 Strategies) 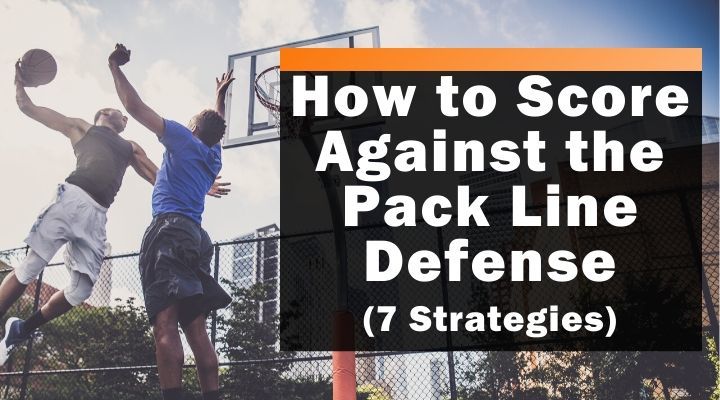 If you watch basketball at any level, you are sure to come across the “Pack Line” defense.

This is for good reason – it works!

This defense, created by Dick Bennett and perfected by his son, Virginia coach Tony Bennett, focuses on keeping the ball out of the paint.

It’s common at the college, high school, and youth levels.

Despite its effectiveness, the Pack Line can be scored on by intelligent offense.

Because of the defense’s popularity, you’re almost sure to see it regularly.

Here’s a plan for how to attack it.

To create a plan for attacking the Pack Line, you must first understand how it works.

The following are some of the core principles used by Pack Line teams.

One tenant of the Pack Line defense is pressure on the basketball.

Because of the built-in help, the defense can disrupt the ball-handler without fear of getting beat and allowing an easy score.

2. Help Defenders Inside the “Pack Line” 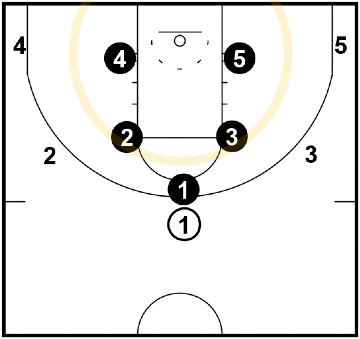 This is really the key to the defense.

The system prioritizes help over denial. This means that defenders guarding the ball are all stationed below the level of the ball ready to help on potential drives

The “Pack Line” as coined by Bennett, is an imaginary line several feet inside the 3-point line.

At any given point, four defenders should be inside this line.

Like most defenses, Pack Line teams emphasize defenders jump to the ball on each pass.

All five defenders must move toward the ball together, including the on-ball defender, who must closeout to contain the ball.

Once the ball is stopped, they prioritize recovery.

Defenders who are stationed in gaps help stop the ball, then closeout on “air time” when the ball is passed to their man.

Most Pack Line teams trap the post when the ball is entered.

The most common way to trap is to send the opposite post defender at the ball.

With both post players double-teaming the ball, the perimeter players must rotate to take away the basket and the most logical passes out of the trap.

Strategies to Score Against the Pack Line:

Just as an offense would try to utilize back cuts and aggressive drives against denial defense, teams must try to use Pack Line teams’ tendency to help against them.

The following are some strategies for taking Pack Line help defenders and putting them in difficult positions.

The good news against Pack Line teams is that, because they don’t deny perimeter passes, they allow your team to reverse the ball.

Take advantage of this by moving the ball from side to side, forcing the defense to guard multiple actions.

If you dribble down and try to attack a loaded Pack Line defense on the first side of the floor, you will be in for a long night.

However, unless you're playing Virginia, if the defense has to defend actions on the third and fourth side of the floor, someone is bound to make a mistake, opening up a scoring opportunity for your team.

This is extremely important for teams hoping to attack Pack Line defenses off the dribble.

Because of the help defenders stationed inside the Pack Line, it’s hard to drive the ball without expanding the space these defenders need to cover.

The two diagrams show the lack of driving room your players will find with traditional Pack Line Defense spacing.

Notice how the ball-handler has no room to safely put the ball on the floor.

Instead, teach players to make cuts that will manipulate the help defenders.

Turn the “single gap” into a “double gap” that will be harder to defend.

One way of doing that is through the use of “blur screens”.

This screen, commonly used in the Dribble Drive Motion offense, truly is barely a screen at all.

Execute a blur screen by passing and cutting right by the player you passed to.

The timing of this action is key.

The player receiving the pass drives the ball in the direction the passer just vacated, trying to bump his or her defender against the cutter.

The goal is to create space to drive and use the bump of your teammate to create an advantage.

An example of a blur screen is shown in the diagram above.

Notice how Player 1’s cut creates a double gap to give Player 2 more space to operate.

This is important against any defense, but especially so against Pack Line teams.

This defense requires constant closeouts because of its help and recover nature, and skilled drivers will find opportunities to attack.

However, they must go immediately and in straight lines before the help side defense has a chance to load up.

Teach players to “clip the hip” on the drive, meaning getting your shoulder to the defensive player’s hip and driving in a straight line.

If your players can do this consistently after some ball and player movement, they will have opportunities to get to the basket and to the foul line.

As previously stated, Pack Line teams jump to the ball on every pass.

While this is a sound defensive concept, flare screens take advantage of it because they force defenders into longer closeouts.

Flare screens are extremely difficult to guard, and they can create open jump shots or driving opportunities for your players.

There are two primary types of flare screens:

a. Screens for the passer

b. Screens on the weak side of the floor

The two diagrams show a screen for the passer.

Notice how far X1 has to recover after jumping to the ball on the initial pass.

The next diagram shows a flare screen on the weak side of the floor. 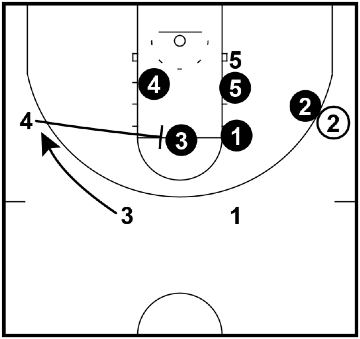 This action is a bit harder to teach, but intelligent players can be taught to look for opportunities to screen a teammate’s help defender.

Notice in the diagram how much the defense loads into their gaps.

This makes them more susceptible to being screened on the weak side.

Skip passes can be very effective against Pack Line teams.

This is another strategy for dealing with the defense’s principle of loading up to the ball.

Skip passes keep the defense in closeout situations, and eventually closeouts will break down.

It may be helpful to view the weak side of the floor against Pack Line teams as a zone defense.

The same flare and skip strategies you might implement against zones can be just as effective.

Pack Line defenses hope to keep the ball out of the post, and they will typically trap hard to force it back out once it has been entered.

A smart team can take advantage of this.

There is a certain risk involved with any kind of double-team, and the post is no exception.

Before facing a Pack Line team that doubles the post, train your players to see the floor and find an open teammate.

“Middle to explore, baseline to score.”

On the post catch, teach your players to check the middle of the floor.

By doing this, they will be able to see if a trap is coming and from where.

A simple ball fake from the post can move the rotating help defenders enough to open up a pass to an open teammate.

The diagrams above show this strategy used to attack the post trap.

When Player 4’s defender leaves to trap, he dives to the weak side block.

Now, X2 is responsible for guarding both Player 2 and Player 3.

If the offense maintains proper spacing, this should result in a catch-and-shoot opportunity off of a skip pass or an extra pass shot or drive.

Against a quality Pack Line team, your team will need to make some perimeter shots.

Encourage players to be ready to shoot with confidence.

Defenders will come help, even from one pass away.

Take advantage of this by knocking down open jumpers.

This will better open up your inside game as well.

The Pack Line defense poses many challenges to its opponents.

However, a perfect defense does not exist.

If you train your players to take advantage of the Pack Line’s principles and use its extreme help against it, you will create open shots and have a great chance of coming out with a win.