How to Deal With Slow Starts in Basketball 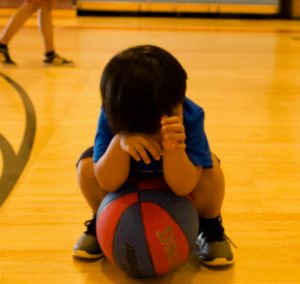 I’ve recently taken on the role of coaching a young youth boys team. The boys are aged 9-10 and I absolutely love coaching them. We’re not a great team (yet), but they’re all great at paying attention and they all give me their best every practice, but we have one major problem…

We keep getting off to very poor starts.

I’m sure we’ve all been apart of teams that have done the exact same thing. Came out with no energy, the ball just doesn’t seem to be going through the ring. It’s not a fun experience.

This begs the question, “What do I do when my team starts off the game poorly?”.

Since the tournament I’ve come home and talked to a few great coaches I’m close with, done a lot of research, and also used my own experience to come up with five great tactics you can implement when your team gets off to a poor start.

You can be a fantastic outside shooting team but sometimes the ball just won’t go through the ring. The answer? Take higher percentage shots. For example, get to the basket!

It happens to older youth teams all the time, especially against zones. I see teams playing against a zone and they get great looks from the three-point line, but the ball just won’t fall through the ring. They call a time-out, decide to attack the ring, and go back out there and get good looks from the three-point line so they continue to take them. It requires discipline from the players to give up shots they would usually take to attack the ring.

Doing this will also lead to free-throws. A great way to put early points on the board while getting the opposition in early foul trouble.

2. Give Bench Players a Chance

If your starters are having an off-night (everyone does occasionally) why not give someone else a chance?

During one of the games in my tournament on the weekend, all five starters started out with very little energy compared to the other team. I went over to my bench and asked the five players on the bench if they could see how little energy the five players on the court were giving. They all agreed and I asked them if they think they would give more effort. They all said they would. I then subbed all five starters for all five bench players, receiving a few weird looks off some of the parents. Within five minutes two of the players had dived on loose balls and after a few hustle plays had brought the game back to even scores!

Don’t be afraid to give your bench players a chance!

Momentum is everything in youth sports. Kids see the ball go through the ring and their confidence sky-rockets.

If the opposition gets off to a great start call a time out so the other team settles down and your players get a chance to compose themselves. This also allows you to talk to your players about how they’re letting the opposition score and what they can do to fix it.

4. Motivate Your Players With Goals

You can even use this tactic on a single player if you need to. On my team, there’s a great little player with fantastic rebounding ability, but like all little kids, would rather stand around outside and shoot the ball. If I don’t set him a rebounding challenge, he just stands around and goes half-hearted at the boards, but if I set him a challenge to pull down 10 rebounds that game, you can be sure he’ll work his butt off to do it!

If the reason you’re off to a poor start is because the opposition seems to be scoring at will, maybe it’s time to change up the defense.

My youth teams usually runs a full-court 2-2-1 press which we’ve had a lot of success with recently. Against one of the teams we played on the weekend they made our zone look like a joke! They had two lightning-quick guards with crazy ball-handling skills. They just breezed through our zone and created 2-on-1 or 3-on-1 opportunities at the other end.

Realizing our full-court press was pointless, we came back to a half-court man-to-man defense and it defintely made the game a lot more even. They weren’t getting easy transition scores anymore against us. In-game adjustments are very important.

We want to hear about your experiences. Leave us a comment below and tell us some of the other tactics you’ve used when your team has started out poorly.