1-4 Press Break to Score on Any Full-Court Defense 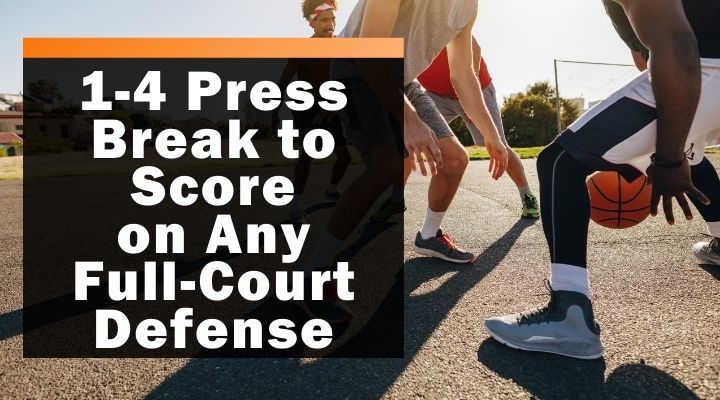 There are many factors that go into winning and losing basketball games:

However, at the high school level and below, I don’t think anything will lose a game faster or more frequently than a team’s inability to handle pressure.

We've probably all had teams that have excelled in a controlled half court game, but immediately lost their poise when the opponent began to press.

As a coach, there’s nothing more frustrating than helplessly watching from the sidelines as your team commits countless turnovers when the other team extends its defense.

But it doesn’t have to be this way!

One of the most important jobs a basketball coach has is to equip players with the skills, mindset, and alignments needed to attack pressure.

Each of these elements is crucial – without one, the other two are not nearly as effective.

The 1-4 press break is one sound way of attacking man or zone full court pressure.

Check out the diagrams and options below to see if this type of attack will work for your team.

One of my favorite ways to attack full-court pressure (man or zone) is with the 1-4 press break.

Below I’ll tell you why you should use it and I’ll show you how it works.

Benefits of the 1-4 Press Break:

a. Can be Effective Against Man and Zone Presses

The best press break alignments are versatile. Against a team that changes defenses, you don’t want your players looking to the sideline waiting for a play call. The 1-4 alignment eliminates that confusion because it can be used against any pressing defense.

Some pressing teams try to deny all inbound passes. If your alignment has players deep down the floor, the defense will be able to do this more effectively. By bringing all players up, it eliminates back side help, opening up potential deep passes if the defense denies.

This is another benefit of bringing everyone up against a press. Opponents will need to make a choice: Do I bring up everyone, including a potentially slower post player, or do I just let the ball inbounds? Against many teams, either option could benefit the offense.

d. You Can Attack to Score

Most 1-4 press breakers eventually send a player down the floor. This still allows your team to hunt layups after it breaks the press. In fact, having a player start high and then break down the floor is more difficult to guard than simply stationing a player deep for the whole possession.

There are many things you can do out of a 1-4 alignment. We will show a few options in the next section, but you can use your imagination to adjust the press breaker to fit the personnel on your team. 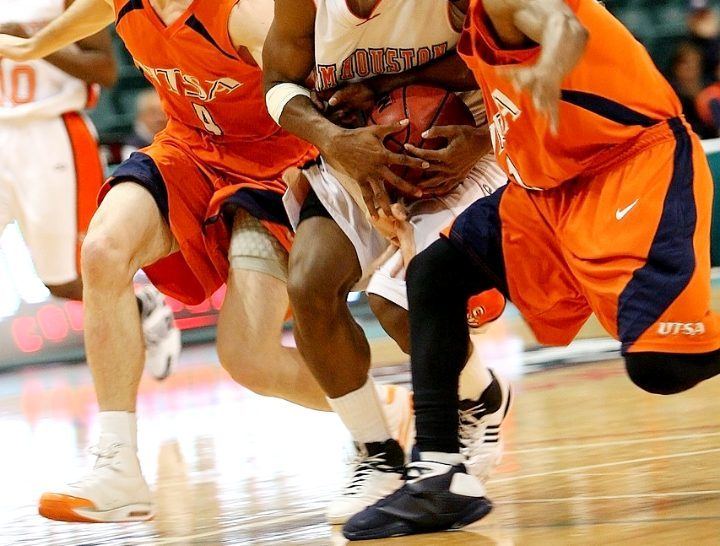 This alignment can be effective against any of these looks.

Consider the best way to use your personnel.

For example, do you want your point guard to receive the first pass, or would you rather he or she attack up the floor on the second pass?

In the diagrams below, notice how the offense maintains sideline, middle, reverse spacing.

In these diagrams, the fifth player is used in the “deep diagonal” position.

If the ball is reversed, players fill both sidelines and the middle. 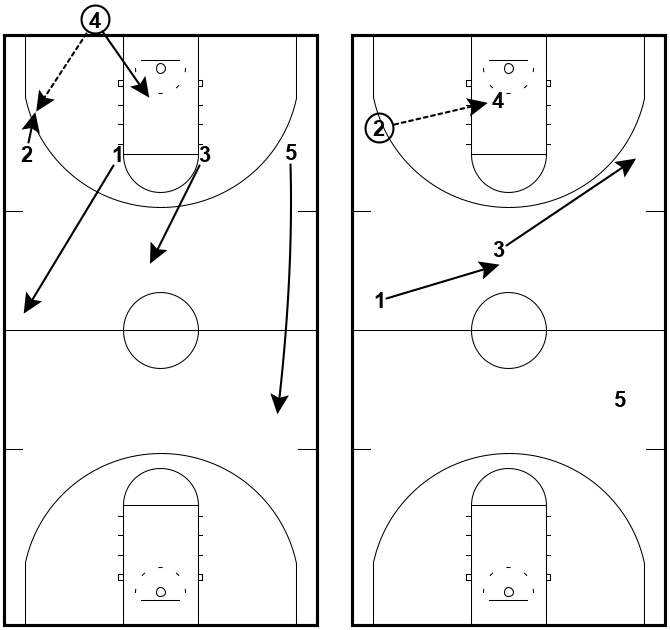 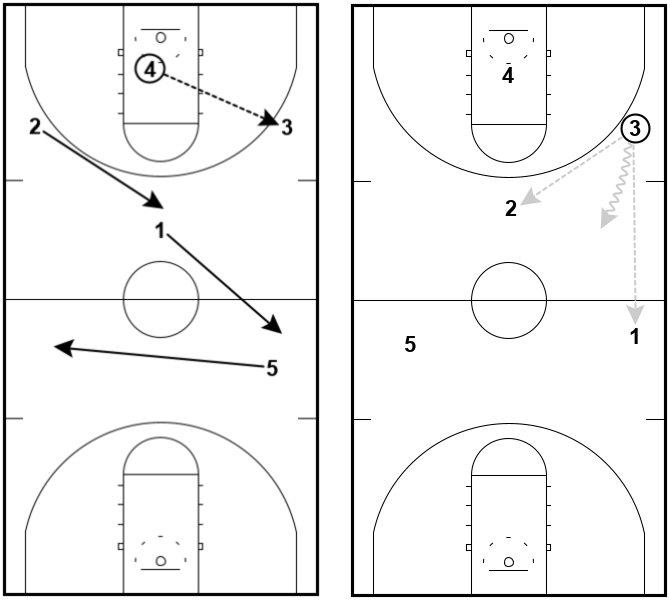 Against man pressure, you probably want to set screens to help your players get open.

This can be done in many ways, but one option is diagrammed below.

Again, players can be positioned however suits your team, but notice one important detail in the diagram:

This is usually a good idea because two advantages could be created against a switching defense.

First, your point guard will usually be quicker than the opposing post player.

Second, your post player should be able to seal an opposing guard.

Another possibility is for Player 5 to screen his or her own defender, making the switch more difficult. 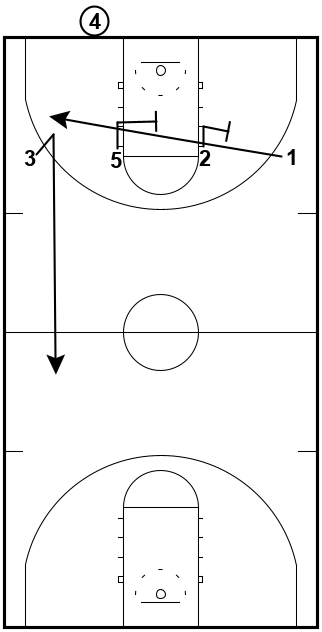 If the ball is inbounded to a good ball-handler, you can clear out of their way vs. a man-to-man defense.

Some defenses will not trap, instead choosing to pressure the ball handler 1-on-1.

If this is the case, your guard should not have trouble and it is better to give them space.

Some teams will let the ball handler start to dribble, then will leave from another player and trap. This is where the pullback dribble is necessary.

In the diagrams below, notice how, as the trap occurs, Player 1 uses a few pullback dribbles and the other teammates are “pulled” to the ball handler into the sideline, middle, reverse position. 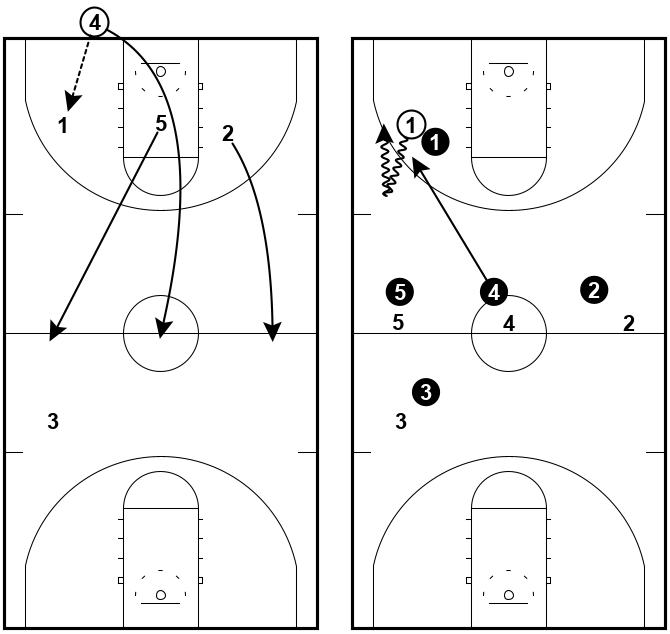 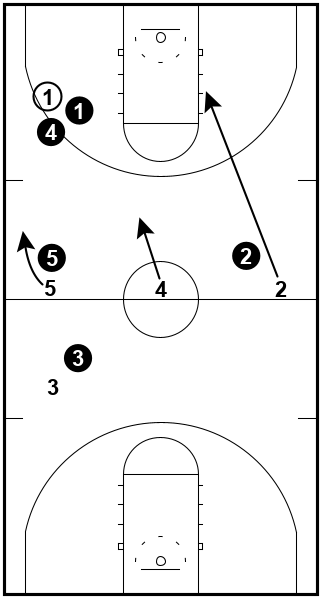 Teams that completely sell-out to deny the inbound pass can be very difficult to play against.

While the second option can certainly be effective against these teams, you may want to have another option as well.

This look is good for teams that negate your screening actions with effective switching.

For example, athletic teams with five players of similar size and quickness may be able to switch without giving up significant size or speed disadvantages.

Against those teams, it may be smarter to maximize space rather than setting a lot of screens.

In the diagrams below, the defense is in a full court man-to-man face-guarding defense with the inbounder’s defender playing “centerfield.”

The offense counters by all four potential pass receivers walking their defenders as close to the baseline as possible. This shortens all passing options and creates even more space to operate.

Once the ball is inbounded, all offensive players should have an advantage.

The ball-handler can simply read the centerfielder and pass the ball ahead.

This is a great way to alleviate pressure by forcing the defense to become less aggressive. 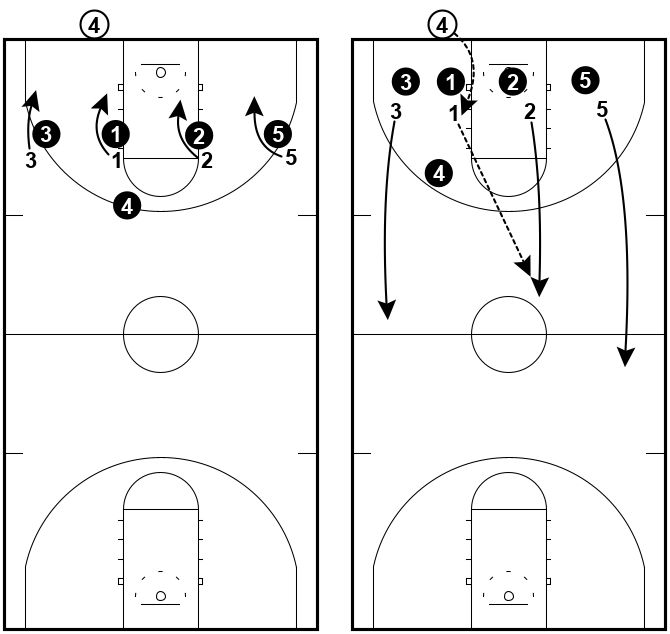 a. Screen and Seal vs. Denial

No press breaker will be effective if you can’t inbound the ball safely.

If you’re facing a team that denies the inbound pass, you probably want to utilize screens to help free your ball-handlers.

However, your screeners MUST be ready to receive a pass after screening.

This is because many pressing defenses will switch all screens.

If a player screens a teammate’s defender, he or she should pivot in a way that keeps the switching defender on their back.

b. Screen Your Own Man vs. Switches

Another strategy against a switching defense is to screen your own defender.

If the defense wants to jump out and switch on all screening actions, screening your own defender makes it difficult for them to do that.

This type of screen can free a teammate to receive the ball.

c. Run the Baseline After Makes

One simple habit to teach your inbounders is to run the baseline after a made basket by your opponent.

If the strong side of the floor is not open, the inbounder can run to the other side to explore options there.

This shortens a potential pass to the opposite side.

This is a crucial part of attacking man or zone presses that like to trap.

Some coaches like the fifth player to be diagonal, while others prefer him or her to be deep.

Regardless, these first three options are essential.

This is because it is very difficult for the defense to put two players on the ball while still covering sideline, middle, and reverse options.

With proper spacing, the player being trapped must simply remain poised and find the open teammate.

Jumpy defenders can be moved and manipulated with clever ball fakes.

If you want to pass to the middle, fake a pass up the sideline, or vice versa.

Ball fakes can take some of the aggression out of a defense.

This is the most important type of dribbling against trapping defenses.

Many man or zone presses attempt to bait the ball handler into dribbling before coming to trap.

Good players don’t mind being trapped because they know that traps create openings for the offense. However, you must create space to make those passes.

Pullback dribbles allow you to get that space.

Execute a pullback dribble by turning your shoulders so that the ball is behind you, putting your chin on your top shoulder so that you can see the floor, and taking big push steps back to create space.

As a ball handler uses a pullback dribble, his or her teammates should come back to the ball to shorten the pass. Think of it as the ball handler pulling teammates toward them.

Skilled ball handlers may be able to pullback and attack the other direction off the dribble (“pullback and reattack”), but most players will want to beat the press with the pass.

g. Play With Your Eyes Up

This sounds simple, but it is harder to execute when facing a double-team.

Players must be trained to maintain vision of the floor.

The problem is that ball handlers panic and simply don’t see them.

Emphasize vision in practice and reinforce it through the use of film so that your players learn the importance of seeing what options are available.

h. Score Early or Late in the Clock

Teach your players that the goal of press offense is to SCORE!

If you are content with simply getting the ball across half court and running offense each possession, there is no risk for the defense and they will just press more aggressively.

However, shot selection is crucial when playing against full court pressure.

Your first priority should be attacking the press for a layup.

If a layup (or a quality shot from a good shooter) does not materialize, then you can run your offense and seek a better shot.

Remember, many pressing teams want to speed you up.

If your press offense only creates quick long-range jump shots, you are probably playing right into the hands of the defense.

At some point in your season, you will encounter a team with strong full court pressure.

Will your players be intimidated, or will they feel prepared to attack the defense for layups on the other end?

By emphasizing the proper skills, mindset, and alignments, you can prepare your team to excel in these high-pressure moments.