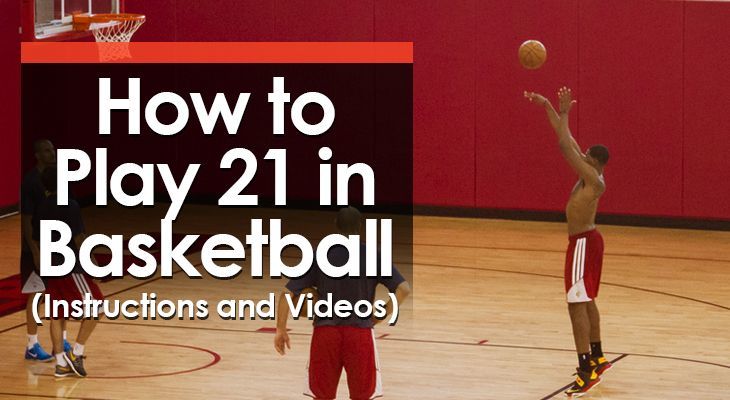 Every player has played the “21” basketball game before.

It’s similar to traditional 1-on-1, except there are multiple defenders to score against.

It’s not a game you’ll often see at an organized basketball practice. Rather, it’s a basketball game kids will play for fun at the local park or after school.

In this blog post, I’ll show you exactly how it works.

You’ll learn everything you need to know about setting it up, how 21 is played, the scoring system, how to pick who has first possession, and multiple variations.

How to Play the 21 Basketball Game

There are a couple of ways to determine who gets the first possession...

The most common is to have one player shoot a free throw. If the shooter makes it, he gets the ball. Otherwise, whoever gets the rebound will have the first possession.

Another way to determine who gets first possession is to take 3-pointers one at a time. The first player to hit the shot gets the ball to start the game.

The scoring system used for 21 follows that of traditional basketball.

The first player to reach 21 points is the winner.

Each player must keep track of their own score throughout the game.

The player with possession gets the ball at the top of the arc.

They will then attempt to score against multiple defenders who should work together to make scoring as difficult as possible for the offensive player.

On a miss, everyone crashes the boards and battles for the rebound.

If the offensive player gets it, they can immediately shoot again.

But if one of the defenders gets the rebound, they must dribble the ball outside the three-point arc before they can attack the hoop or shoot from outside.

Whenever a player scores, they go to the free-throw line while the other players get in rebounding positions.

If the shooter makes the free-throw, they get to shoot another (the maximum number of free-throws that can be made is two).

After this, that shooter takes the ball out and begins a new possession at the top of the arc.

If the shooter misses either their first or second free-throw, the player who rebounds must clear the ball before they can shoot.

The ball should also be cleared after a change of possession for any other reason, e.g. turnover, block, missed shot, etc.

Players should call their own fouls.

When these happen, the ball is awarded to the offense at the top of the key.

If fouling becomes too frequent, add a rule that the offensive player gets to shoot one free-throw each time they get fouled.

The 21 basketball game is a great way to work on scoring against multiple defenders and it’s incredibly fun to play if you’ve got 3 or 4 players.

There are many variations, which makes it appropriate for all ages and skill levels.

Give it a go next time you’re in the gym!