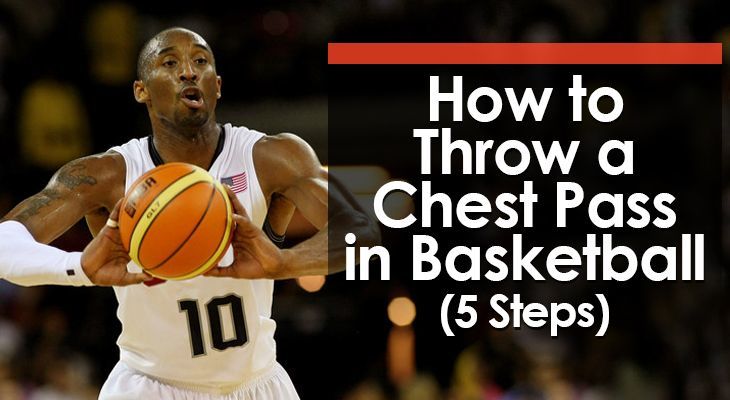 The chest pass is one of the first things that a young basketball player learns.

Learning this simple pass is vital as it serves as the foundation for more advanced passing techniques that players will learn as they get older.

In this blog post, I’ll give you a few steps to master the chest pass.

The first step is to pick the right pass for the situation.

One major advantage that a chest pass has over other types of passes is speed.

Since its path is a straight line, it’s the quickest way to get the ball to your teammate.

The pass, however, is not without flaws.

There can be drawbacks to using the chest pass, which is why it's important to pick the right pass for a given situation.

Easier to Intercept - Since the pass is thrown in a straight line at chest height, if used at the wrong time it can result in a turnover.

Not Ideal for Long Distances - If there’s a sizeable distance between the passer and the target, it will be difficult to keep the chest pass hard and flat.

Not Ideal for Close Range - At close range, such as inside the key, a chest pass will be (a) difficult for a teammate to handle and (b) easier to intercept.

If you don't already know the importance of proper form, here’s a quick rundown.

Proper form generates the maximum possible power for your pass, resulting in the fastest possible pass. And the faster your pass can reach its target, the better.

Every pass should put your teammate at an advantage.

This requires placing the pass in the correct spot.

When making a chest pass to a shooter, for example, you should aim for the torso, which is the “shot pocket” for most basketball players.

This is easy if your target is stationary… but things get a bit more complicated if your teammate is on the move.

If that’s the case, predicting where your teammate will be is crucial.

To avoid placing a pass behind your teammate, you should aim for where your target is going to be rather than where they are the moment you spot them.

A pass should keep your teammate in rhythm as they make their next move - whether they drive to the basket, make a second pass, or go up for the shot.

A pass outside the target might still be caught, but it will take another second or two for your teammate to gather themselves, giving the defense time to adjust.

Just like the bounce pass, it’s essential to have proper follow-through to ensure both accuracy and power.

You want to end the pass with both arms locked out and fingers pointing in the general direction of your target.

There’s no need to prolong the follow-through as you would a jump shot.

Step #5 - Throw Defenders Off With a No Look

This is more advanced and should only be practiced by players after they’ve mastered the basics of the chest pass.

With the regular chest pass, you should always keep your eyes on the target.

This helps improve accuracy, BUT it also shows the defense where you’re passing.

Most defenders will watch your eyes in an attempt to predict where you’re going to throw the basketball.

So by giving that information away by staring at your intended target, you’re increasing the chance that the pass will be intercepted.

If it’s an appropriate situation, throw your opponent off by looking in one direction while throwing the chest pass a different direction.

If the defense isn't able to read your pass, their chance of stealing significantly decreases - no matter how close they are to path of the ball.

If you can master this, you'll become a much more effective and dangerous playmaker for your team.