5 Basketball Defense Drills to Lock Down Any Opponent 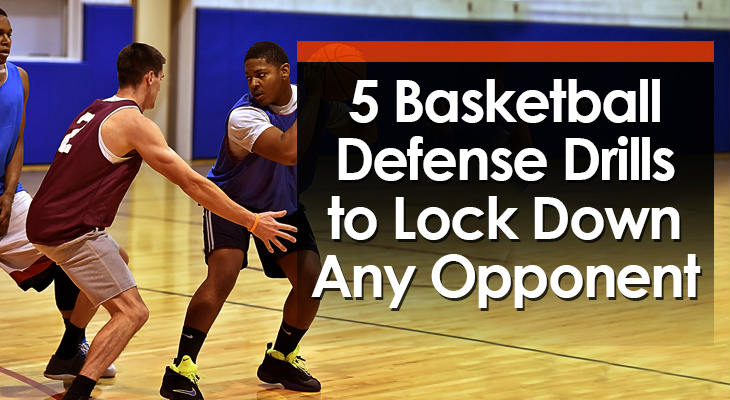 Being willing to hustle and play hard on defense isn't enough...

To develop a great defensive team, players must learn correct defensive technique and understand where they should be on the court depending on who they're guarding and the position of the basketball.

And the best way to accomplish this is by using proven basketball defense drills during your team practices.

The goal on the defensive end of the floor is to force the opposition into taking the most difficult shot possible.

This requires players to be able to play great on-ball defense and for help defense to be in the correct position and ready to rotate and help when needed.

Use the following 5 basketball defense drills to: 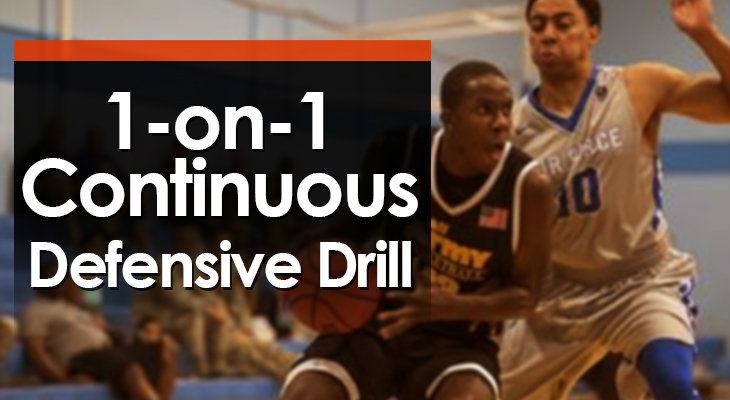 Players form a line at the top of the key and fill the wing spots. An offensive and defensive player start by playing 1-on-1 from the wing. After the score or defense takes possession, the offensive player immediately closes out on the opposite wing and they play 1-on-1.

A fast-paced and competitive drill with focus on attacking the defender off a close out and being able to guard the opposition in isolation. 1-on-1 play is fantastic for development.

Wing Starts With Basketball - Instead of receiving the pass from the top and being able to attack the defense as they’re closing out, both wing players start the drill with a basketball as well. This means the offense must wait while the defender closes out until the defender touches their hip before they can attack the rim.

Loser to Defense - The player that loses the one-on-one battle closes out on the next defender. This means that if the offense scores, the defender will stay on defense. If the defense gets a stop, then the offensive player will transition to defense like usual.

Limited Dribbling – Limit the dribbles the offensive player on the wing is allowed to use before taking their shot. Usually it’s best to allow 3 dribbles for youth players and 2 dribbles for advanced players. 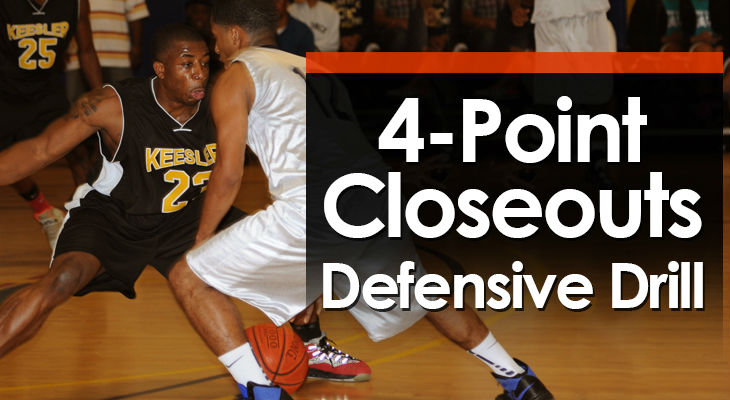 The primary purpose of this drill is to work on closeout technique. Specifically, footwork and staying on balance. 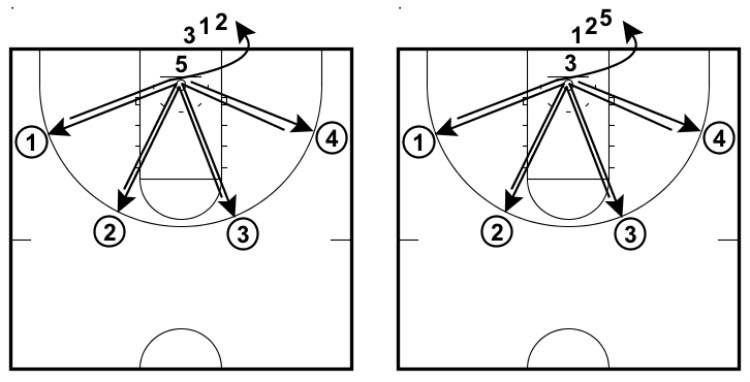 Offense Takes 1-2 Dribbles - After closing out and pressuring the basketball, the offensive player takes one to two dribbles either left or right and the defender must slide with them to stay in front. After two slides, they back-pedal to the rim.

Cones Instead of Players - If all you’re doing is closing out and retreating, consider using cones to close out to instead of players.

Opposite Direction - While the drill states to perform it clockwise, throughout the drill you should change the direction people are rotating at some stage. 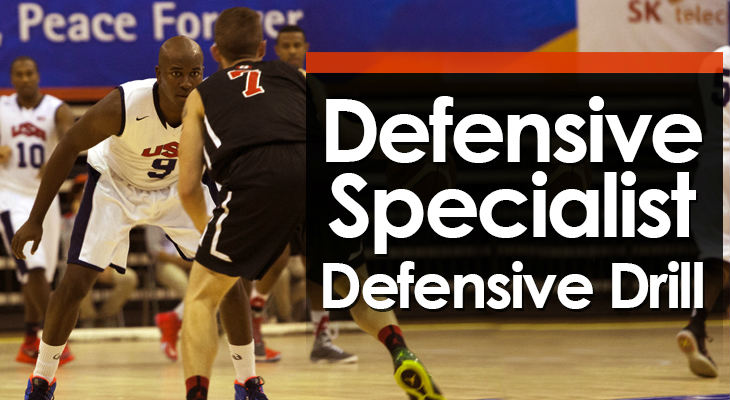 Defensive Specialist is a continuous drill that works on the different defensive movements players will make on defense including closeouts, defensive sliding, back-pedalling, and sprinting.

Since this drill covers all the most frequent movements players will make on defense, it’s one of the best basketball defense drills to get them used to these different movements. 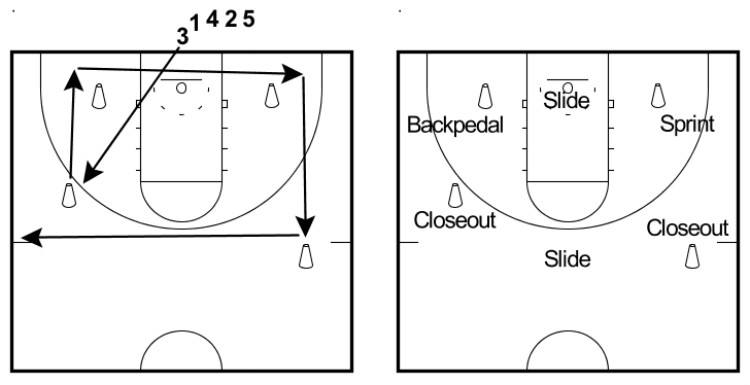 Different Course - You can easily change the course by differing the placement of the cones. Make sure to focus on the main defensive movements. 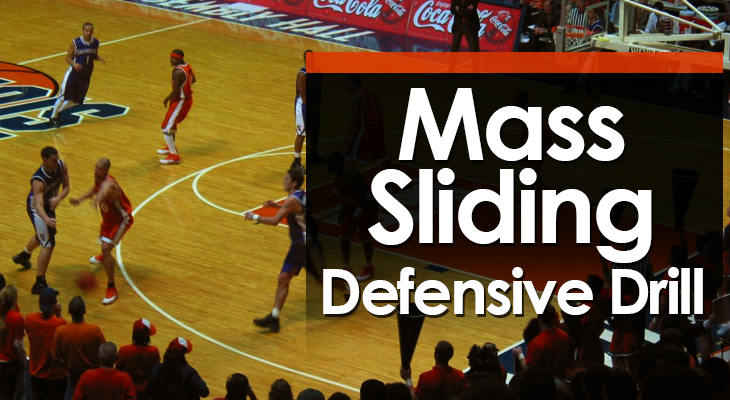 Players are spread out in the half or full court in a defensive stance an even distance apart from each other. A coach or another player then instructs the team to complete different defensive movements that players must follow as a collective group.

A defensive drill that focuses on the fundamentals of individual defense while incorporating in conditioning. Improves defensive footwork and technique required to successfully guard a player with or without the ball.

Lateral slides east and west - Point the direction you want them to slide.

Drop step slides - Point diagonally behind them. Players must drop step and then slide that direction.

Close-Outs - Point hands in the air. Players sprint 2 - 3 steps forward and then close-out with high hands while keeping a low base.

Charge - Cross arms at chest. Players fall backwards simulating taking a charge and then get straight back up into pitter patter.

Rebound - Jump up with two hands. On the rebound call, players must jump up and down three times as high as they can simulating getting a defensive rebound.

Back-Pedal - Pointing behind the players. Players behind must communicate with the player in front of them.

Sprint - Motion forward with hands. Players must sprint forward to their starting position. 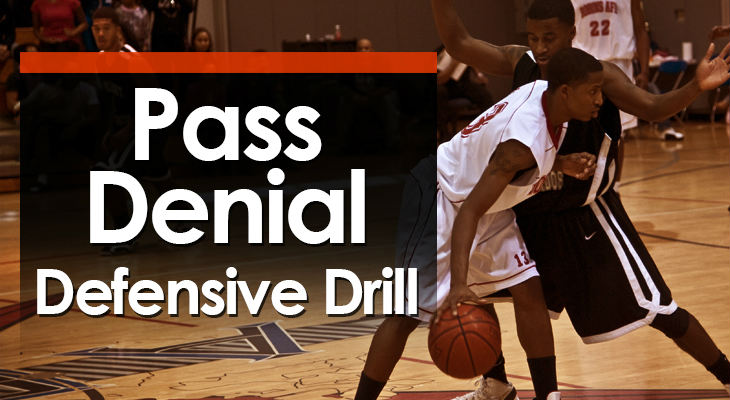 Two players compete 1-on-1 from the wing. The goal for the defense is to prevent the pass to the wing player while the offensive player attempts to make 3 catches in a row.

Being able to deny the pass to your opponent is one of the most important skills in a traditional man-to-man defense. This drill allows players to practice their positioning and being able to react to the movements of the offensive player.

Live 1-on-1 – After the pass is made, you can allow the players to play one-on-one until a score or a missed shot. The offensive player has a maximum of 2 - 3 dribbles before shooting.

Both Sides of the Floor - Since there are only 3 players involved at one time in the drill, run it on both sides of the court and also at the opposite end of the court if you have enough players.