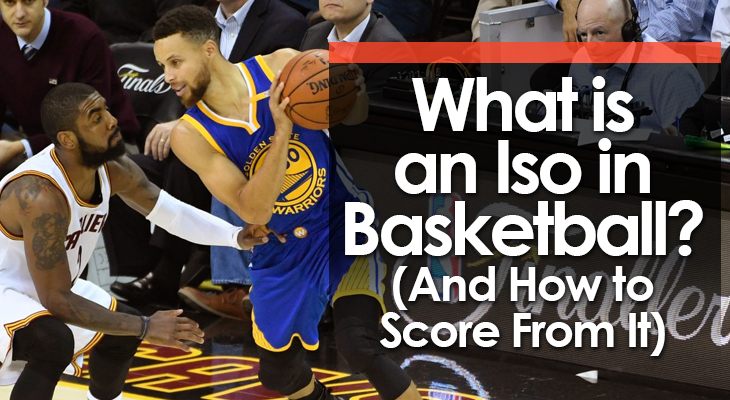 Have you ever watched a game where one player keeps attacking 1-on-1 on offense?

If so, you've seen an iso before.

"Iso" (short for isolation) is a tactic used at all levels of basketball -- sometimes intentionally and sometimes out of desperation -- to create a 1-on-1 scoring opportunity.

This can be an effective strategy if you have a (1) skilled isolation scorer or (2) a mismatch.

In this post, I'll define exactly what an "iso" is and show you how to use it to score.

What is an Iso in Basketball?

An "iso" involves giving one player the basketball (often the team's best player), and then getting their teammates to clear out so player in possession can attempt to score 1-on-1.

The most common iso location is the wing, but it can be execute from any part of the floor.

It's difficult to create a great shot in isolation, so it should only be used by highly-skilled players.

How to Set Up an Isolation

The first thing you need to do is decide WHO you want to run the iso.

Two questions to choose the player:

To determine this, take note of which players possess effective 1-on-1 moves during practice.

This will be an explosive player who can attack and finish in a crowd of defenders.

(b) Who currently has a mismatch?

The other option is to select the iso player based on matchups.

Do any of your strongest players happen to be matched up against a weak opponent?

Do you have a significant height mismatch anywhere for an iso post-up?

After deciding WHO to iso, you need to decide WHERE the isolation should happen.

> What are the strengths of the isolation player?

> Where do they feel most comfortable on the court?

> What are the strengths of the other 4 players?

These are all question you need to factor in when deciding where to do the iso.

3. What should their teammates do?

If the 4x off-ball offensive players are in the wrong spots, it will give the off-ball defenders the opportunity to provide help, which will make scoring in isolation much harder.

Here are a few diagrams of how off-ball players should set up, depending on where the iso is:

4 Keys to Being an Effective Iso Player

Just like everything else in basketball, effectively running isos takes practice.

Here's how coaches can help their players learn to be effective in isolation plays:

Isolations are all about creating space and beating the defender to the basket.

Work on drills where players play 1-on-1.

For example, King of the Court.

Adding limitations to the 1-on-1 (for example, only four dribbles allowed) helps players be efficient and effective as they attack, just as they’ll have to be in a game.

Much of being able to beat a defender 1-on-1 comes down to footwork.

I highly recommend the Tates Locke Box Drills to all players.

A player must have a good handle to get around their defender and get to the hoop.

Make sure that ball-handling drills are a part of your practice plans.

Most important of all...

Making the right decisions is vital to how effective players are in isolation.

> If a player is double-teamed, are they able to make the right read and pass out?

> If they’re forced to their weak hand, can they go that way to beat the defender?

Advantages of the Iso in Basketball

1. Getting a Scorer the Ball

One of the biggest advantages of isos is that you're able to get the ball in a scorer’s hands.

Ultimately, coaches want their best players to have the ball and an iso is effective at doing that.

2. Can Attack Weak Defenders and Mismatches

One of the biggest advantages of an isolation is it allows you to attack weak defenders.

If you or your players identify a weak link on the defensive end...

You're able to capitalize off of that with a well-timed iso.

When the game clock or shot clock is winding down, getting the ball into your best player's hands and setting up a quick isolation play is an effective strategy.

This is a much better option than continuing to run the offense when there are only 7 seconds left on the clock, where the possession will likely end in a rushed shot.

If you have a player who is effective in iso situations, the defense may be forced to double.

When your isolation player sets up for a 1-on-1, a defender may need to rotate over to help, which leaves someone else on the floor wide open.

Providing your isolation player is able to read the floor and make a good pass, this can result in many wide open jump shots and layups.

Disadvantages of the Iso in Basketball

1. Can Be Too Predictable

If you rely on isolation plays too much, the four off-ball defenders will be prepared.

They'll each take a step closer to the ball, which makes it harder for to attack and score.

Zone defenses are designed to pack things in and make teams shoot from the outside.

There will always be a tall player waiting at the rim to challenge the drive.

It's not impossible to run isolation plays against a zone, but it is much harder.

3. Teammate May Not Feel Involved

If you use isolation plays too often for only your one or two best players, you run the risk of frustrating the other players on the team.

The lack of ball movement can lead to resentment from teammates. 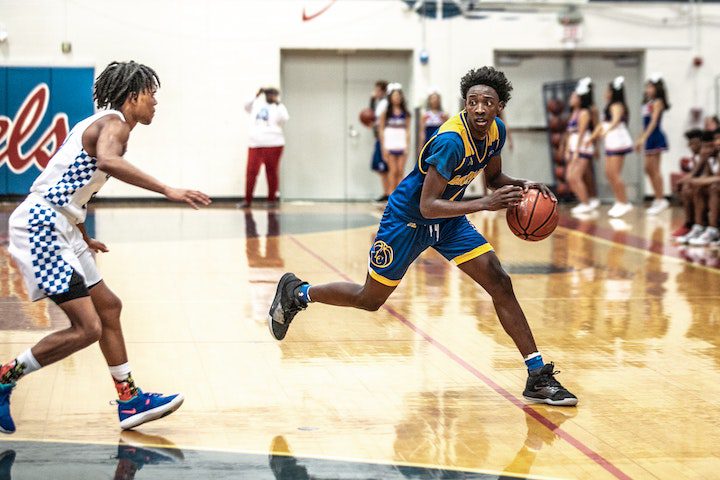 When learning how to be an effective isolation player, one of the smartest things you can do is watch some of the all-time greats who excel at this part of the game.

The five players below are excellent at creating space, reading their opponent, and getting great looks despite....

The best basketball player of all time.

Jordan was one of the best isolation scorers we've ever seen from ALL areas of the floor.

Much like MJ, Kobe Bryant was tremendous in isos and was extremely hard to guard.

Allen Iverson was a smaller guard, but that didn’t make it any easier for defenders to guard him.

Known for his crossover in isolations, and was as good as anyone at creating his own shot.

His isolation crossover against MJ is written in NBA history books.

Durant is a 7-footer with point guard handles and an elite jump shot...

That makes him near-impossible to guard when he decides to isolate outside.

Harden is known for his step-back jumper, but his ball-handling is second to none.

He's able to create shots for himself and is one of the best players ever in iso situations.

An iso is widely used in basketball across all levels of the game.

It’s a way for players to take their defenders 1-on-1 to create a scoring opportunity for their team.

While it can be an effective way to score points, teams should be careful with how often they’re utilized, especially if they aren’t yielding good results.