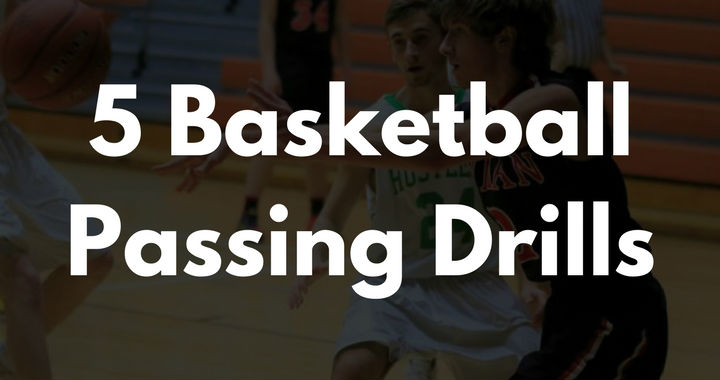 There is nothing better than watching an unselfish team who are able to move the basketball around the court quickly and efficiently.

Breaking down the defense with smart passing and getting each other free for open jump shots and layups.

Wish your team could do this?

The basketball passing drills on this page can help you achieve it.

But first, let me explain something super important...

There are two types of passing drills:

Unfortunately, most coaches only focus on 'technique' passing drills and forget about training their team's decision-making ability when it comes to sharing the basketball.

Your players are not going to improve their in-game passing by making thousands of chest pass repetitions.

While technique drills do have their place, they're far less important than decision-making basketball passing drills.

We must allow players to learn how to read the defense and make correct passing decisions. The drills 'Monkey in the Middle' and 'Netball' below are two of my favorite drills for doing this.

Also, passing drills are great to start practice with to warm up your team and get them communicating and working together.

Players form 3 lines spread out evenly along the baseline. The two outside lines start with a basketball. 3 players progress up the court passing the basketball’s back and forth to the middle player and then finishing the drill with two layups.

A fun passing drill that works on catching and passing without traveling, communication, timing, and also layups at the end of the drill. 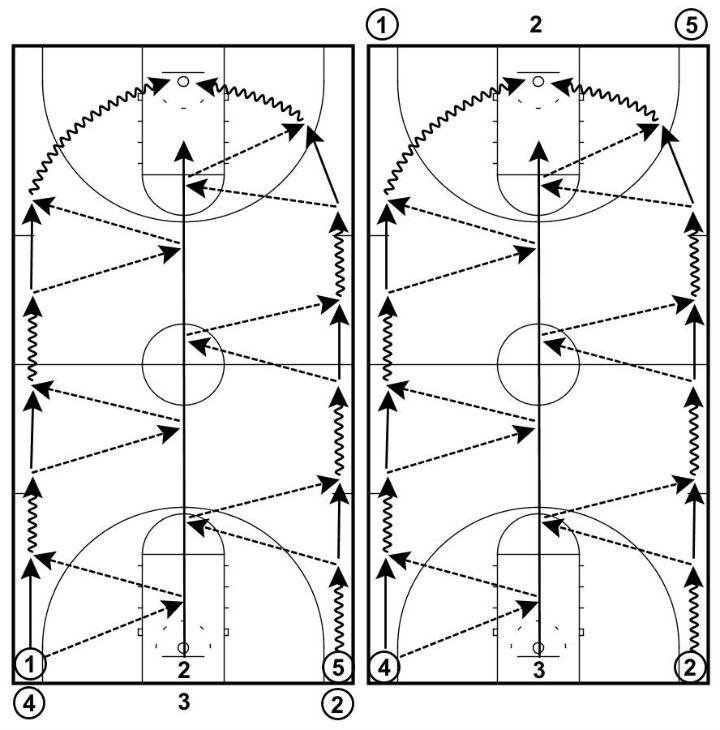 Up and back - Instead of waiting at the other end, the group can make two trips of the floor.

One basketball - If you’re coaching very young players, you can run this drill with one basketball until they understand how it works.

2. Monkey in the Middle

Players are divided into the groups of three. Each group has one ball. Two passers are lined up 12-15 feet apart. Third man in the group is “monkey in the middle”. He attempts to deflect or steal the basketball. Two outside players must pass to each other without the use of lob passes or dribbling. Just pivoting and using fakes to open up passing space and get the ball past the defender.

Fun passing drill while also working on defense. This drill will teach players how to utilise fakes and pivots to create area to pass as well as protecting the basketball. 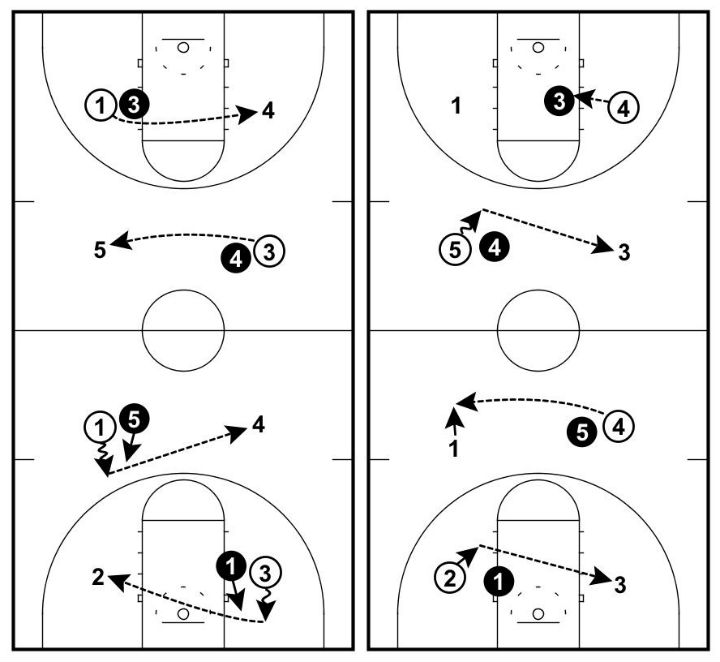 Switch after a certain amount of time – Players can rotate
positions after a certain period of time (depending of the age of the players, their strength, and endurance) instead of after every steal and deflection. 30-40 seconds for example.

One dribble allowed – Allow the offensive players to make one dribble to open up the passing angle. This will make it tougher for the defensive player.

The team splits up into 4 lines in the half-court corners. Players will then make a one or two-handed pass out in front of the player to their right who start running along the sideline or baseline. The passer then joins the end of the line they passed to.

Passing drill intended to use mainly with younger players or as a warm up drill. This drill will improve passing to players on the move as well as being able to catch and pass without dribbling.

Include a Second Basketball – If the players are comfortable with one basketball, introduce a second starting in the opposite corner.

One Dribble - Players are allowed to take one dribble before making the pass to the next line. This can be beneficial if you’re doing one-handed passes.

A great warm-up passing drill that provides a lot of passes in a short amount of time. Including passes of different lengths and types for players to practice. 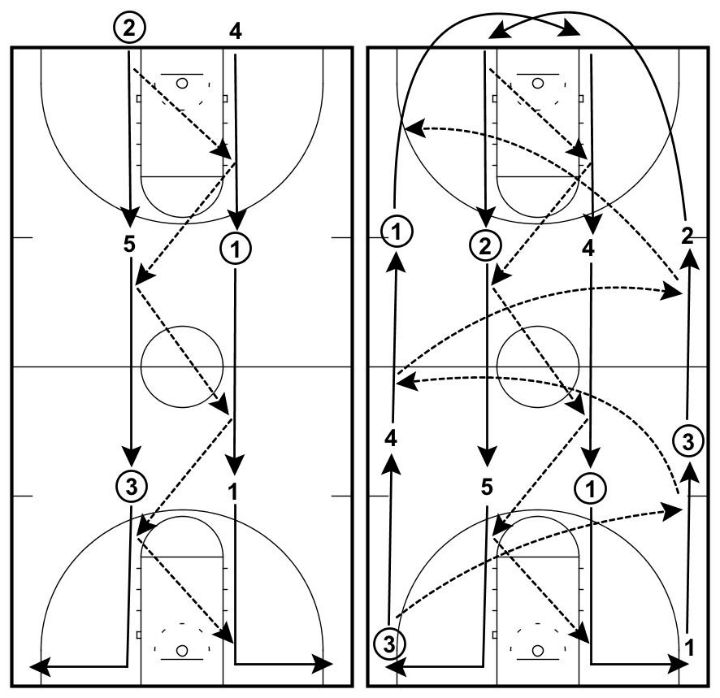 Passing for the Outside Lines - For the outside lines, here are a few passes I recommend: Chest passes, overhead passes, one-hand passes.

Remember to take into account the age, strength, and skill level of your team when deciding which passes they should use during the drill.

A regular scrimmage with no dribbling of the basketball allowed at any time. Games can be played either 3 on 3, 4 on 4, or 5 on 5.

A great drill to improve not only passing, but also moving without the ball, spacing, cutting, etc. This drill will lead to less over-dribbling in games and fewer turnovers. 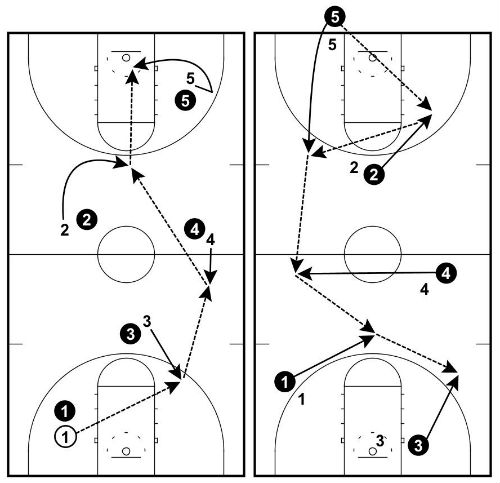 Once bounce allowed - Players are allowed to take 1-dribble whenever they get possession. This isn’t a requirement, just an option.

3 teams – The drills starts by dividing your team into 3 teams of between 3 - 5 players. Two teams start on defense in each half. Third team is in the middle of the court on offense. The offensive team chooses one side and attempts to score without dribbling. Same scoring system as above. After a score or change of possession, the defense team gets the basketball and attacks going the opposite way. The previous offensive team can play defense until half-court. Play until one team reaches 5 or 11 points.