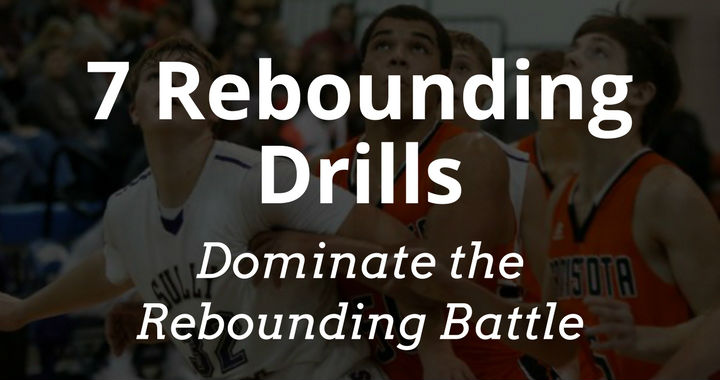 Do you want to coach a team competing for championships every season?

Then your team must be able to rebound at a championship-level.

On the defensive end of the court, allowing your opponent to secure offensive rebounds will hurt your team's confidence, ruin momentum, and will lead to easy baskets for the opposing team.

On the offensive end of the court, being able to secure offensive rebounds will lead to extra points (potentially a lot of them), increase confidence, and improve your team's energy and hustle.

If your team is able to grab just 8 offensive rebounds a game, that could potentially result in your team scoring an extra 24 points a game!

In 90% of games, that would quickly turn a devastating loss into a comfortable victory!

Before I share the rebounding drills with you (they're below), let's quickly discuss the easiest way to teach your team the technique and mindset behind rebounding...

When a shot is taken by the opposition, all players on the floor should rebound using this simple 3-step formula.

Let's break each of them down further...

As soon as a shot is put up, the first thing all 5 players must do is 'find' an opposing player to prevent from getting an offensive rebound.

To be a great rebounding team your players cannot wait to see where the basketball bounces or whether the shot is made or missed...

Finding a player must occur immediately after the shot release during the flight of the ball.

This will often be a player's direct opponent but can get a little more complicated if your team is playing against a good offense that forces rotations and switching.

As each player finds an opponent, they must establish position between the opposition player and the basket.

The second step involves a player making contact with their opponent.

Unlike what is commonly taught to most youth players, not all 5 players should 'box out' their opponent.

If a player is defending on the perimeter, the defensive player needs to simply make contact using their forearm to prevent the offensive player from sprinting in to rebound.

A player on the perimeter boxing out and putting their weight back into their opponent isn't a good idea as it doesn't put the defender in a great stance to pursue the rebound (step 3).

Inside or close to the key, defenders should battle for front position and box out their opponent.

The key point to remember is this:

Great rebounders find contact on the flight of the shot. Poor rebounders wait and allow the contact come to them.

"I always laugh when people ask me about rebounding techniques. I've got a technique; it's called just go get the damn ball" - Charles Barkley

Most teams only teach their players to find an opponent and make contact (box out). This will lead to your team will give up many rebounds as the offense battles around the players.

Great rebounding teams have coaches who emphasise the 3rd step...

Pursuing and securing the rebound.

After making contact, you must teach your players to attack the ball with relentless desire and fight to secure the rebound with two hands.

For players close to the rim, this will often be battling to get the best rebounding position.

For players on the perimeter, attack the basketball and look to grab a quick rebound and start the fast break.

Rebounding must be a 5-man effort.

With that said, let's get to the rebounding drills!

7 Rebounding Drills Your Team Must Use

The first player in line with a basketball passes to themselves off the backboard and goes up strong for the rebound with two hands, secures the basketball, and then pivots outside to pass to the next player in line.

The purpose of this rebounding drill is to teach all players how to rebound in a controlled drill that lets them focus 100% on their rebounding technique. Great drill for all youth teams.

Both Ends of the Court - If you have a large group and access to two backboards, split them up into four groups and use both ends of the court.

This rebounding drill is primarily run 4 on 4. The offensive players space themselves outside the three-point line and the defense starts in the key. The defense will slide from side to side and then a specific defender will close out on a shooter. The rest of the players must communicate and find a player to box out before securing the rebound.

This is a great drill for giving players experience communicating, boxing out, and pursuing the basketball on a rebound. It also works on three-point shooting.

There’s a couple of ways you can score this drill:

Two groups competing against each other. Drill starts with 2 offensive players and 2 defensive players on the elbows. A coach or player shoots the basketball and the 4 players must battle to secure the rebound. If the defensive team rebounds, they receive one point. If the offensive team rebounds, that’s one strike. On 3 strikes the teams switch places.

A tough rebounding drill that encourages players to make contact and then pursue the basketball to secure the rebound. 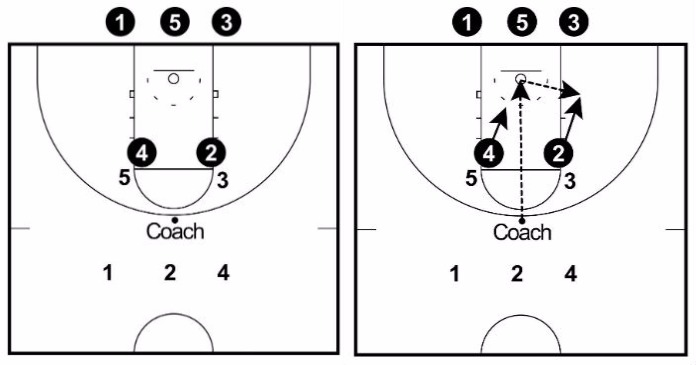 The goal is for the defensive team to secure as many rebounds as possible before the offensive team grabs 3 rebounds.

For each defensive rebound secured, the defensive teams gets 1 point.

Once the offensive teams grabs their third rebounds (3 strikes), the teams switch roles.

Whichever team finished with the most points at the end of the drill is the winner!

3 Pairs of Players - If you have a large group, you can add a third pair to the drill which means there will be 6 players fighting for the rebound.

Both Ends of the Court - If you have another coach at practice and a large team, split them up into 4 groups and run the drill at both ends of the floor.

A fun rebounding drill variation that emphasises the importance of defenders communicating, working as a team, and making contact with an offensive player before securing the rebound.

(Square as an example)

No Transition - It’s not compulsory to transition up and back off the rebound. You can simply use this as a rebounding drill and then set up again.

4 pairs of players are spread out around the free-throw circle or center circle. One of the players is on offense and one on defense. There is a basketball in the middle of the circle. On the coach’s call, the defenders have to keep the offensive players away from the basketball using boxing out technique.

This is a great drill for teaching players the basics of how to box out and also encouraging them to be physical with their box outs. 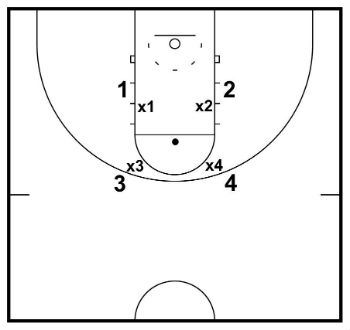 Different Number of Players - You can use this drill from 1-on-1 to 5-on-5. After 5 pairs, there’s simply too many offensive players for the rebounding drill to be effective.

More Groups - If you have more than 10 players, split up into two separate games instead of making players wait for their turn. Keep everyone involved.

This drill is a more competitive and advanced version of Road Runner. In this rebounding drill, two players compete to rebound a basketball inside the key and then score. Which ever player scores the basketball outlets to a wing player. The wing player must then dribble down the court and make a layup, midrange shot, and three-point shot before returning to the end of the line.

This is a great multi-purpose drill to work on a variety of skills with a focus on rebounding and toughness inside the key. Players will practice rebounding, scoring under pressure, and making shots from a variety of distances. 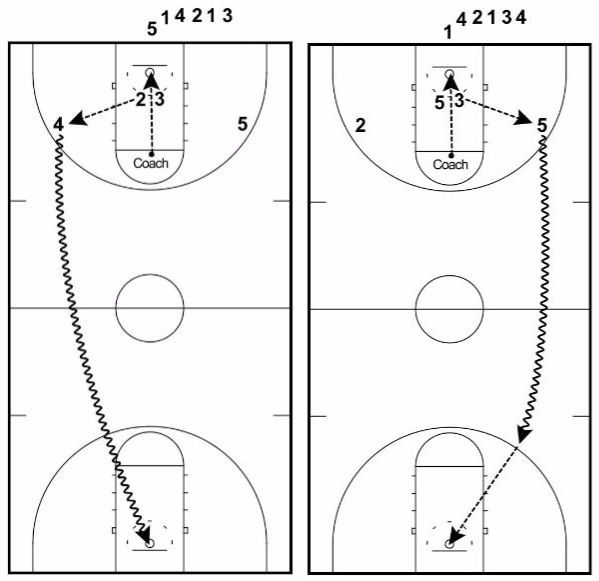 No Scoring Inside - Instead of the players battling inside for the score, you can make it so that the rebounder immediately outlets to the wing player.

Three Players - Instead of only having two players rebound inside, introduce and extra player.

Different Shots - On the opposite end of the floor, you can vary what shots the players have to make instead of a layup, midrange, and three-pointer.

Dribbling Course - Set up a short dribbling course using cones that players must complete and they dribble to the opposite end of the floor.

How The Drill Works:

This is a great drill to get players used to boxing out from a help position. Many players have a habit of not worrying about boxing out when they’re already in help. This drill focuses on the players finding their players and making contact when the coach goes up for a shot.

The drill is scored individually on how many defensive rebounds you can get.

Any time a player secures an offensive rebound, both defensive players receive a point.

There are no points awarded for an offensive rebound.

At the end of the drill, whichever player has the most points wins!

Here's the secret that no one tells you...

Desire is more important than skill and technique when it comes to rebounding the basketball.

"You don't need great skill to be a tough rebounder; being a rebounder is all about effort, determination, and physicality" - Mike Malone

Rebounding is 75% desire and 25% ability. It comes down to one basic fact, 'How much do you want the basketball?' - George Raveling

While using the rebounding drills above, ensure to emphasise the importance of hustling after every rebound like a championship is on the line.