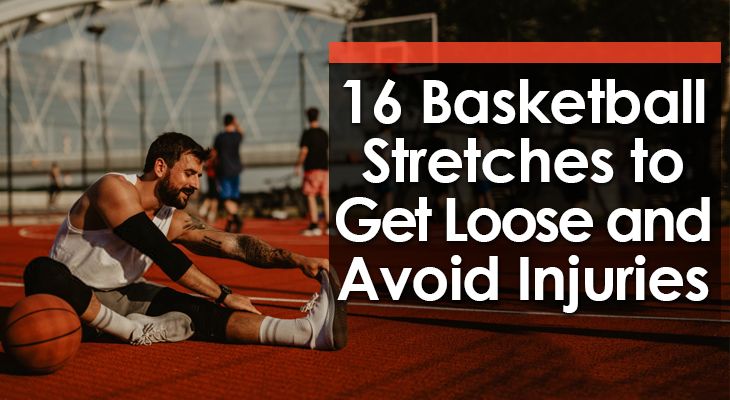 When planning their basketball practices, coaches consider which drills and plays to work on.

But they often don't consider which basketball stretches to do.

Most coaches overlook the warm-up completely, or have players conduct static stretches.

This is a mistake.

Players need to stretch to get loose, and also to cool down after working out.

Stretching allows players to reduce their injury risk, and also gets their muscles ready to perform.

Dynamic basketball stretches allow players to get their muscles warm.

It prepares them for full-speed action, whether that be in a game or practice.

They help prepare players by increasing the blood flow and oxygen in their bodies.

Once dynamic stretching is complete, players should be breathing heavier and ready for action.

Below is an example of a dynamic stretching routine that coaches can use for their team.

This stretch will work on flexibility in the hips, glutes, and hamstrings.

Players will conduct this stretch by walking and raising each knee as high as they can.

While raising each knee, players keep their chest high and shoulders back. They will lift the opposite arm to exaggerate a running motion.

They will be driving their heels up toward their butt as many times as possible.

While driving their heels up, their ankles, knees, hips, and shoulders should all be square.

Ankle pops look similar to the motion of jumping rope, but players move forward on every jump.

It’s important for players to jump off of their toes and not lock their knees.

Ankle pops help to work the quads and strengthens the ankles.

Carioca involves lateral movement for players, which is important in basketball. It also helps with agility and footwork.

Players will rotate crossing their trailing leg in front and then behind. They will continue this pattern down the court.

The "Frankenstein March" is a basketball stretch that helps stretch the hamstrings and calves.

In this stretch, players will extend one leg out in front of them as high as their flexibility allows while touching that toe with their opposite arm.

This is then repeated on the other side and alternated all the way down the court.

The hips, knees, and glutes are all activated in knee hugs.

While walking forward, players will hug one of their knees into their chest.

They will alternate legs as they move down the court.

Players can do this stretch both forward and backward.

Players will walk forward on their toes while alternating legs pretending to step over an imaginary fence in front of them.

When moving backward, players will remain on their toes, but will step backward as if they are moving over an invisible fence behind them.

Lunges are a popular dynamic stretch and help activate numerous muscles in the lower body.

Players will move forward as if they are walking, but they will drop their back knee a few inches from the floor.

The front thigh should be parallel to the ground and the torso should be straight. Players will alternate legs as they move down the floor.

Players will face the side for this stretch, as they mimic a defensive fundamental.

Feet should begin a bit wider than shoulder-width apart. Players will push off of their back foot and lead with their front leg to move forward.

While players are performing this, their feet should never touch, or even come within six inches of each other.

The backpedal is one of the best basketball stretches to activate muscles in the lower body.

It will activate the glutes, quads, hamstrings, and calves.

Players will turn their back to where they are heading, then reach back as far as they can as they move down the court.

They should keep their hips down with a slight lean forward to prevent an accidental fall.

Just as importantly as warming up the muscles, players should also have a cool-down routine to prevent injuries and take care of their bodies.

Static cool down stretches help to ease the body out of strenuous activity.

They also bring down the heart rate, body temperature, and blood pressure levels.

Go through the static stretching routine below after every practice and game.

Players perform this stretch in a standing position. They stand on one leg, then pull their other heel toward their butt by the ankle.

Players will hold this position for 15 seconds, then alternate legs.

In a toe touch stretch, players will stand with their feet together.

Keeping their legs straight, players will bend at the waist and reach as far down as possible toward the toes. Players should hold this for 15 seconds, then repeat.

This stretch will help to stretch the hamstrings.

In the shoulder stretch, players should stand with their feet just a bit wider than shoulder-width apart and with their knees slightly bent.

They will pull their right arm parallel across the front of the chest and use the left forearm to pull it closer. After holding that stretch for 15 seconds, they will alternate arms.

In a seated position, players will extend their left leg out and cross their right leg over with the right knee pointed toward the sky in a bent position.

Gently pull the bent knee and thigh toward their chest for 15 seconds, then switch legs.

To initiate the core stretch, players will lie down with their chest on the floor.

Slowly, push up and move your chest away from the floor until you feel a stretch in your core.

Hold this position for 15 seconds, then repeat.

Players start by finding a wall and placing their hands flat against it.

Extend one leg all the way back while keeping the other leg bent to balance on.

They’ll hold this position for 15 seconds, then switch.

The two main types of basketball stretches are static and dynamic.

Players conduct static stretches in a stationary position holding one movement, while dynamic stretches are controlled movements that look like the activity they're about to perform.

Static stretches are a good way for the body to cool down.

After the test, they conducted a 5-minute jogging warm-up, then they were randomly assigned to one of four groups, which included:

After their warm-up and stretching, the group did another vertical jump test.

There were significant differences in the static stretching group vs. the other three.

The static stretching group performed worse, proving it's they're not effective for warm-ups.

It’s important for players to use basketball stretches to warm up and cool down their bodies.

While a static stretching circle used to be a widely-used warm up, it would be more effective to use those stretches as a cool down.

In replacement of the static stretches as a warm up, teams should use a dynamic stretching best prepare their bodies for play.