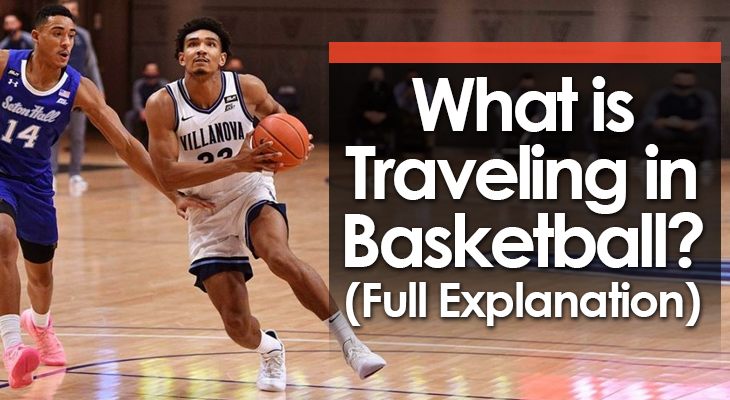 Traveling in basketball is a violation that regularly confuses people.

This isn’t all that surprising considering the rule is slightly different at the top level of basketball.

Unsurprisingly, this leads to frequent debates about whether a specific move is or is not a travel.

For example, the “euro step” and the “step through” frequently lead to online disagreements.

Below, I’ll break down exactly what traveling is in basketball.

What is Traveling in Basketball?

Traveling is a violation that involves illegally moving one or both feet while in possession.

In basketball, players cannot take more than two steps with the basketball in their hands.

(Unless they’re dribbling, of course)

If a player ever takes more than two steps while they have the ball, they’ll be called for traveling.

Here's a great video that goes more in-depth on the FIBA rules for traveling:

Players establish a “pivot foot” when they aren’t dribbling the basketball. This is the foot that IS NOT allowed to move when the player is stationary and in possession of the ball.

Players can spin on their pivot foot, but it must remain in the same location and cannot be slid.

Players ARE ALLOWED to lift the pivot foot off the ground, but the ball must leave their hands BEFORE their pivot foot returns to the floor. Meaning they must either shoot or pass.

Why is Traveling Illegal?

To put it simply…

The traveling rule is in place to give the defensive team a fighting chance.

If the offensive team could sprint without dribbling, take unlimited steps, and change their pivot foot whenever they wish, the defensive team would have NO CHANCE of stopping the ball.

So, certain rules have been implemented to minimize the offense’s advantage.

Such as the double dribble violation, back-court violation, and traveling violation. 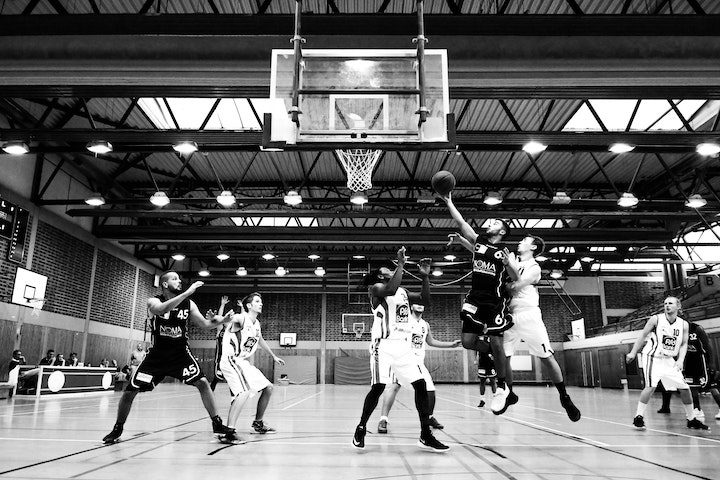 What’s the Penalty for Traveling?

Similar to a double dribble, traveling results in a dead-ball turnover by the offense.

At the college level and below, the defense will receive the ball and throw it in from the sideline or baseline, close to where the traveling violation occurred.

In the NBA, the ball is required to be inbounded between the free throw line and the baseline.

Other Examples of a Traveling Violation:

The two most common ways to be called for traveling in basketball are for taking more than two steps or for incorrect use of the pivot foot.

However, there are other ways to be called for traveling.

1. Rolling on the Floor

If a player is in possession of the basketball on the floor and they roll over with it, this will be deemed a traveling violation.

2. Jumping While in Possession

Commonly referred to as ‘up and down.’ If a player leaves their feet with the basketball (jumps in the air), they must pass or shoot it before either foot touches the ground again.

If a player has possession and makes a pass to themselves (accidentally or intentionally) without any other player touching the ball, this is deemed a traveling violation.

When a player in possession of the basketball falls to the floor without a foul being committed, they will be called for a traveling violation as their pivot foot would have left the floor.

Even if the pivot foot doesn’t “technically” come off of the ground, it must stay in the same spot on the floor. Sliding or dragging the pivot foot is prohibited and will be deemed a travel.

This is one of the most common traveling violations that you‘ll see called. When a player takes their first step, the basketball must touch the floor before their pivot foot returns to the floor.

7. Attempting to Get Up Without Dribbling

8. Shuffling of the Feet

When a player catches the ball (especially young players), they will sometimes accidentally “shuffle” their feet. This involves moving the pivot foot, so it will be deemed a traveling violation.

As basketball is such a fast-paced game, catching every single traveling violation is difficult.

Especially for referees with only a few seasons of experience.

Critics of the NBA often claim that traveling is not called as often as it should be. But many of these critics aren’t aware that the NBA’s definition of traveling is slightly different than other levels. The NBA’s traveling definition is eight parts and incorporates the “gather step.”

That said... referees are human and occasionally overlook the obvious ones:

Humor aside, if a traveling violation is missed, it’s typically because the pace of the game is so fast that the referee didn’t see it or wasn’t confident enough to make the call.

So don’t be surprised to see a few calls missed each game, as it’s such a split-second decision.

As for travels at the youth basketball level...

Referees may not be as strict on each traveling violation.

At that age, if every traveling violation was called, there would be a whistle every 5 - 7 seconds… and that’d be no fun at all.

That said, referees shouldn’t let young kids get away with everything, either…

There needs to be a balance on how much traveling is called vs let go.

As players get older, referees can and should get more strict.

For kids, figuring out the correct footwork to avoid traveling can be a long process.

At a basketball game with beginners, here are a few things you might see:

“How can you team players to avoid these mistakes?”

At practices and before games, explain what a travel is and how to use a pivot foot.

When players do commit traveling violations (in practices or games), stop them and explain what they wrong, and how they can make sure to avoid that mistake in the future.

Not only does this help the player who committed the violation, but it also helps the other players who are listening as they get more reinforcement on common mistakes and what the rules are.

Will there be a lot of stoppages at the beginning?

Absolutely -- but it’s the only way for players to learn and improve.

There are also simple drills you can use at practice that work on dribbling, jump stops, and using a pivot foot. These are all fundamental skills that are necessary for players to avoid traveling.

“Traveling” in basketball is a violation that’s called when a player uses incorrect footwork.

Whether that’s taking an extra step to gain an advantage, or simply an accidental shuffle of the feet while trying to find an open teammate to pass to.

It’s a violation that will happen at least a couple of times in most games, and a coach should not gloss over it if the same type of violation occurs frequently.

Avoiding traveling is a way for teams to keep possession and get more opportunities to score.

With proper guidance in practice, players will fix their footwork and avoid traveling.