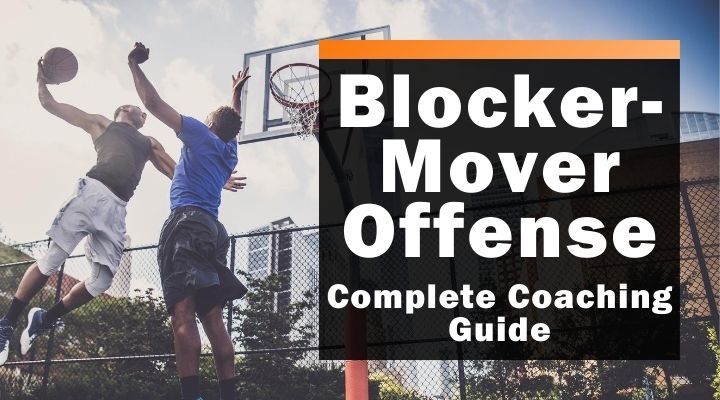 You frequently hear coaches use the phrase:

“I want to teach players how to play.”

If you believe in that adage, you may find that few offensive systems increase a player’s basketball IQ as well as the Blocker-Mover offense.

The Blocker-Mover has been popularized by Tony Bennett’s Virginia Cavalier teams, and its elements are utilized by Terry Stotts of the Portland Trail Blazers.

It's a true motion offense with clearly defined roles for each player.

And the free-flowing nature makes it difficult for defenses to guard and prepare for.

If you are looking for an offensive system that lets players do what they do best, the Blocker-Mover may be a great choice.

They utilize screens in hopes of breaking free for open shots.

Movers must be intelligent cutters who can read the defense properly.

They must also be well-conditioned because they are in constant motion, moving all over the court seeking scoring opportunities.

At times, Movers may also screen for other Movers.

The purpose of this is twofold:

By screening for a Mover, the Blocker seeks to free their teammate for a shot.

However, oftentimes the screener gets open themselves when their defender is forced to help on the screen.

Because of this, Blockers often get easy points near the basket off of post-ups or slips.

Both roles are extremely important to the success of the offense! 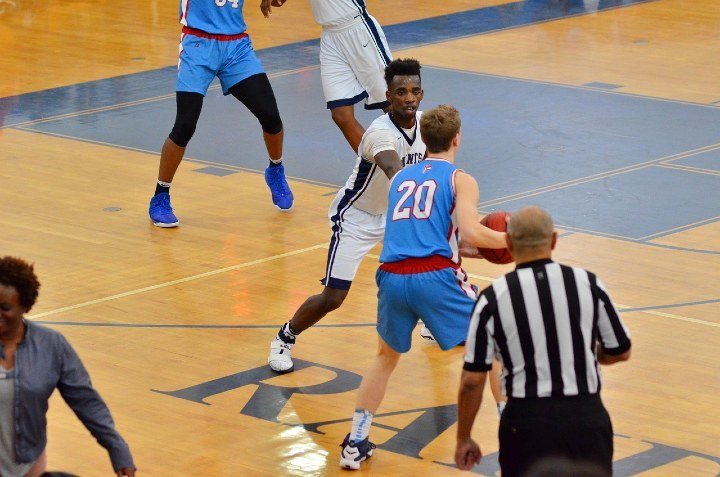 Strengths of the Blocker-Mover Offense:

a. Teaches Players to Read Screens

Movers run through a series of screens designed to free them for open shots.

However, screens are only effective if players know how to read the defense.

Because few coaches emphasize this skill, Blocker-Mover teams can separate themselves from most others in this area.

Reading the defense should be a regular part of practice and will improve as players get more reps.

Understanding these reads will lead to open shots.

b. Lets Players Play to Their Strengths

Because players are categorized as “Blockers” or “Movers,” the coach can determine the best role for each individual.

This leads to clarity for the player because he or she will know what is expected.

We’ve all had a player who may be a good defender and rebounder but struggles with the ball in their hands.

While any offense benefits from having five skilled players, the Blocker-Mover provides those players with a job that is crucial to their team’s offense as well:

c. Seeks to Get Shots for Your Best Players

This goes hand-in-hand with the previous point.

A potential downside of many motion offenses is that they are “equal opportunity.”

While Blockers should get quality shots in this offense as well, the focal point is freeing the team’s best scorers – the Movers.

One trademark of a great offense is one that creates good shots for the best offensive players.

When executed properly, the Blocker-Mover does that.

d. It Will Improve Throughout the Season

Because this offense relies heavily on chemistry between Blockers and Movers, it will take some time to master.

However, when it clicks, it is VERY hard to defend.

Good teams improve throughout the season and peak at tournament time, and this offense will help you do that.

The Blocker-Mover uses unscripted, spontaneous actions to attack the defense.

This makes it difficult to scout because there is no pattern to memorize.

Players make decisions based on what they see.

Opposing defenses will have a hard time disrupting this offense.

Weaknesses of the Blocker-Mover Offense:

a. Takes Time to Master

This is not an easy offense.

If you are looking for something you can implement in just a few practice sessions, Blocker-Mover probably isn’t the best choice.

If you do choose this offense, you need to dedicate practice time building chemistry and teaching screen reads.

b. Role Definition Can be Tricky

Coaches must be careful how they communicate “Blockers” and “Movers” to their team.

While it is true that the best scorers are typically Movers, Blockers have a major part in the offense as well.

Blockers should be taught that by setting great screens, they will open up shots for themselves.

If players feel their only job is to screen while never touching the ball, they won’t play as hard on either end of the court.

Because of its complexity and strict role definition, I do not recommend Blocker-Mover as a youth offense.

c. Choices Can Lead to Stagnation

When executed properly, the Blocker-Mover is BEAUTIFUL.

However, as with any offense, that won’t always be the case.

As players learn the offense, they could overthink their choices.

When players overthink, they sometimes freeze up and the offense stagnates.

This should improve with continued practice.

This is both a strength and a weakness.

The Blocker-Mover is much more effective with five intelligent basketball players on the court.

The good news is, the offense helps to develop this basketball IQ.

While there are several variations of the Blocker-Mover, the most common is the “Lane-Lane” set.

This version plays with two Blockers and three Movers.

The Movers have freedom to move anywhere on the floor, but the Blockers are each assigned one side of the court and set screens up and down the lane lines.

The diagram below shows the typical screening areas for each of the Blockers (Players 4 and 5). 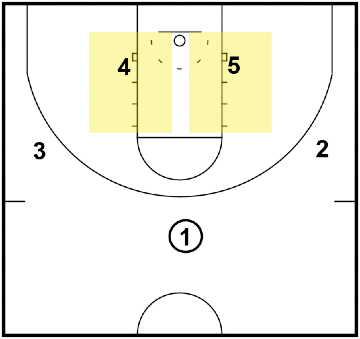 Because Blocker-Mover is a pure motion offense, it is unscripted and impossible to diagram precisely.

Blockers are constantly looking to screen for Movers; after screening, they will post up or make themselves available for a potential scoring opportunity.

The following diagrams show some possible actions you might see in this offense. 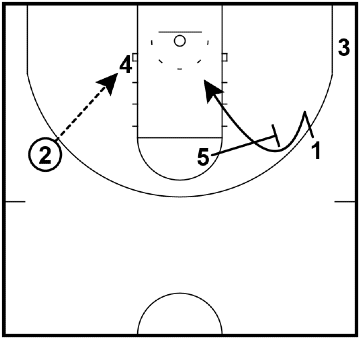 In those diagrams, notice how one action flows to the next.

In this one possession, the defense is forced to guard staggered screens, back screens, down screens, flex screens, and post-ups.

Even better, they are executed in a random order, making them even harder to defend.

It is important for the Blockers (Players 4 and 5) to always look for the ball after screening.

In the above diagrams, Player 5 steps out following a back screen to help get the ball reversed.

The possession ends with Player 4 setting a down screen, then posting up.

The Blockers and Movers work together to create continuous actions.

In the above diagrams, some different actions are featured.

The play starts with a UCLA screen, and also uses a ball screen, and multiple staggered screens.

Eventually, Player 3 gets open for a jump shot.

Notice how, on two occasions, Movers saw opportunities to screen for other Movers.

This happens at random, and, with practice, players will learn the right times to screen for one another.

All offenses have pros and cons.

You must consider the time commitment necessary to master the Blocker-Mover offense.

However, if you’re a patient coach who wants an offensive system that is hard to scout and will develop players and improve throughout your season, the Blocker-Mover could be very effective for your team.

Basketball Offense: 19 Strategies Your Team Can Use