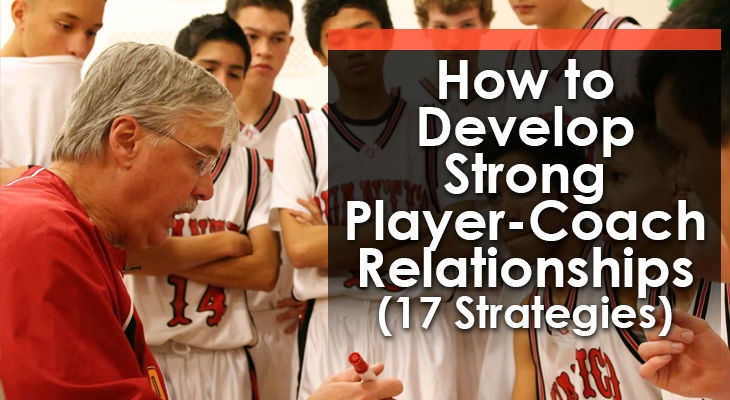 If you spend more than a few minutes listening to any successful coach talk about how they get their team to perform at a high level, you’ll hear one word mentioned over and over again:

We constantly hear people share WHY it’s important to develop close relationships with each of the players on your team.

This is great advice, of course.

But there’s a problem...

No one tells you HOW to go from not knowing anyone’s name on the first day of tryouts, to having each player see you as an important role model in their life.

That’s what this article is going to do.

I’ll give you 17 strategies to develop rock solid player-coach relationships that will last a lifetime and will dramatically increase your team’s chances of success.

1. Greet Each Player With a Smile

Before the start of every practice or game, get around to every player and greet them with a smile and a quick conversation.

This lets them know several things:

It’s important to understand that this requires you to “go first”.

Meaning, it’s up to YOU to approach each player and start the conversation.

Don’t wait for them to come to you.

Unless you’ve already developed a strong relationship with them, young players can often feel too intimidated to approach and initiate a conversation with an adult.

Extended 1-on-1 conversations are a great way to develop trust between a coach and player.

And the key to starting these conversations is to ask open-ended questions.

“Did you have a good weekend?”

Which will often lead to a one-word response...

“How was your weekend?” or “What did you get up to on the weekend?”

These open-ended question will usually lead to a more thoughtful reply and can also give you an opportunity to ask follow-up questions.

Taking the time to commit names to memory is one of the first steps you’ll take to develop a long-term relationship with each member of the team.

By doing so, each player will know they’re important to you.

But it can be a difficult task…

Some coaches are assigned 2 or 3 new teams each season depending on their role at a local sports club. That’s a lot of new names to remember every year!

Fortunately, there are methods like flash cards and mnemonic devices to help you. 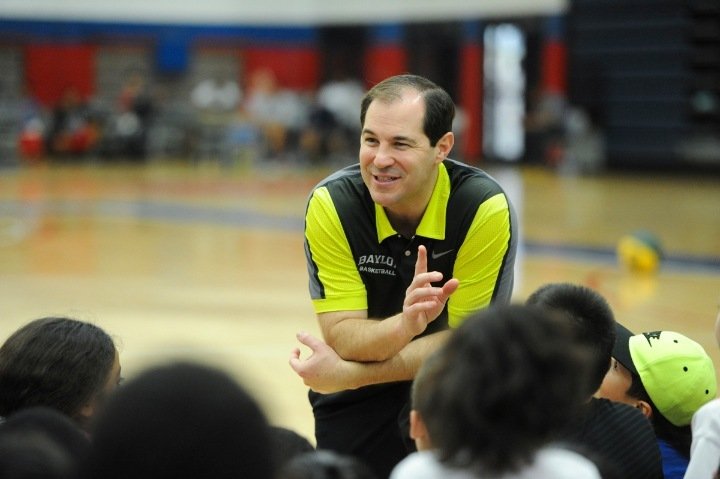 4. Be Organized and Prepared

Most coaches don’t realize how important it is to be prepared.

Not only will it make you a better basketball coach overall, being organized for games and practices proves that you care about your players.

Because players see you’re willing to use your personal time to benefit them.

If you arrive at practice with a piece of paper detailing exactly what drills the team is going to work on, how long they’ll perform each drill, and the important teaching points to focus on…

They’ll know you took the time to prepare - for them!

Also, their parents will definitely notice whether you’re prepared or not…

Another mistake I see coaches make far too often is not adapting their coaching style to the level of the team and the ambitions of the players on it.

Coaching a local U12’s team consisting of a group of kids who just want to play basketball and have fun should be COMPLETELY DIFFERENT from coaching a top-level high school team.

Acknowledging the level you’re coaching and understanding how you should be coaching that particular team will go a long way to developing relationships with the players.

Sharing stories is an incredibly powerful way to relate with and inspire your team.

But it does require coaches to allow themselves to be vulnerable.

Storytelling allows each player to see that you’re a real person with accomplishments and failures, and will show them that you were once in their shoes with similar dreams and fears.

Just make sure you’re not constantly “bragging” about past achievements.

For this to be effective, you need to talk about your mistakes as well.

Explain what your players can learn from your past failures.

7. Get to Know Person Inside the Player

“Relationships with people is what it’s all about. You have to make people realize you care about them.” - Gregg Popovich

In order to establish a long-term relationship with each player, you need to get to know who they are outside of the basketball gym.

You don’t need to ask these questions directly, of course…

But you should seek to find the answers.

If you want to find out what motivates a player, you can usually figure that out through conversations about their family and school if you listen close enough.

This information will give you insight into the best way to coach them, and will also give you non-basketball topics to talk about to develop a deeper connection.

Some basketball coaches get overly focused on the team’s 2 - 3 best players.

90% of their focus is on improving and connecting with this select group of players because they have the most potential to “make it” in the world of basketball (scholarships, professional, etc).

Make every player knows they’re an essential ingredient to the team’s success. 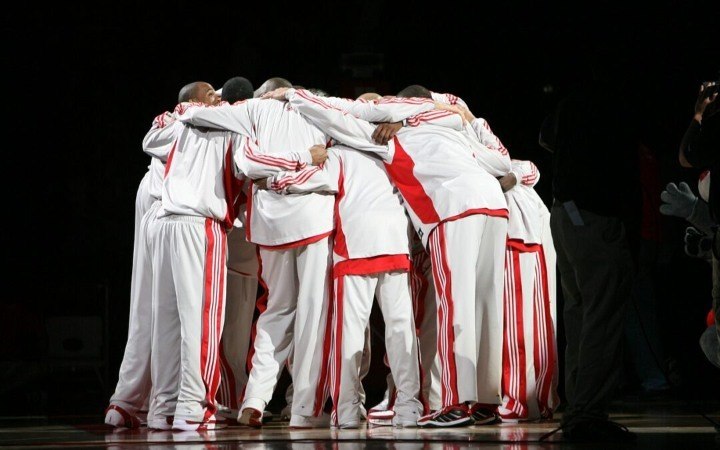 9. Model the Behaviour You Promote

Basketball coaches ARE role models whether they want that responsibility or not.

Your players will be watching everything you do.

And they’re going to find it extremely difficult to trust you and respect your word if you’re not modeling the behaviour you ask of them.

Many coaches emphasise the importance of controlling emotions on the court:

These are all very important...

Yet some of the exact same coaches preaching this can be seen jumping up and down on the sidelines screaming at the referees after a missed call.

Model the behaviour you want to see from your players.

10. Get in Their Parents Good Books

Another way to gain the trust of a player is to establish a relationship with their parents.

You’d be surprised how much a parent’s opinion of a coach influences their child.

If the parents DON’T trust you, the player likely won’t either.

If the parents DO like you, the player likely will too.

This starts by introducing yourself at the start of the season, learning their names, having friendly conversations at games / practices, being organized and prepared, communicating clearly throughout the season, etc.

It’s very important to get the tick of approval from their parents.

11. Leave Your Door Open to Players and Parents

Every basketball coach needs to maintain an “open door policy” throughout the season.

“What does this mean?”

An open door policy communicates to the players and parents that you’re open to discussing any problem, concern, or issue they have.

By encouraging players and parents to approach you when they have questions, you’ll prevent them from bottling up their anger and frustration which could have caused much bigger problems for the team.

You’ll find a quick chat can solve 99% of concerns.

12. Look for Opportunities to Praise

Players love it when you notice their hard work and improvement.

Which is why I recommend all coaches to be on constant lookout to catch players doing something well, and then praise them for it.

If you’ve been encouraging the team to get back quickly on defense, and one kid in particular is sprinting back on every change of possession…

Make sure you let them know that you noticed so they continue to do it.

Bonus points if you praised them in front of the rest of the team, which will motivate the other players to put more focus on this area too.

13. Improve the Way You Give Feedback

Some coaches ruin their chances of building decent player-coach relationships because they’re terrible at giving their players feedback.

Players will dislike any coach who is constantly screaming out criticism / negatives and expecting their players to improve.

Knowing HOW to give feedback is important.

My recommendation - use the “Feedback Sandwich”.

This involves surrounding your criticism in praise so the player understands that you see what they’re doing well, but there’s still room for improvement.

“Johnny, awesome job of spacing the floor on the last possession. But you need to take the shot immediately if you’re open on the catch. Don’t hesitate next time, you’re a great shooter!” 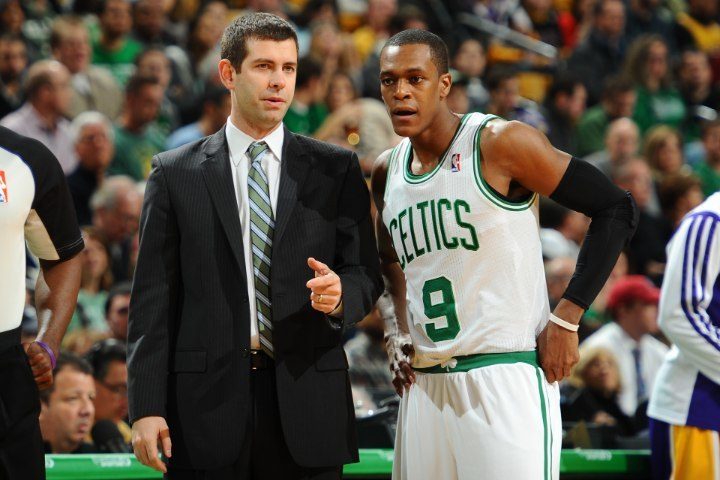 14. Never Humiliate a Player in Front of Their Teammates

One of the main responsibilities of a coach is to point out mistakes.

If a player is carrying the basketball each time they dribble down the floor during practice, it’s important that the coach corrects them so the player doesn’t do it during games.

The wrong way is by intentionally embarrassing the player in front of their teammates.

“Everyone stop! Johnny, how are we going to get into the offense if you can’t even dribble the ball up the court without committing a stupid violation!”

The player on the receiving end of this outburst isn’t going to be interested in developing a lifelong relationship with their coach.

The “right” way, in my opinion, is to follow this advice:

If a player is making the same mistake over and over again, it’s better to take them to the side of the court for a private chat instead of making an example of them in front of their teammates.

This should go without saying, but...

Never lie to your players.

No authentic player-coach relationship can be built on a foundation of lies.

For basketball coaches, this usually occurs with “false praise”.

The issue with false praise is that it becomes difficult for players for players to know if your compliments are sincere, or if you’re just praising them in an attempt to make them feel better about themselves.

Which puts players in an awkward position of not being able to trust your word.

Players must be 100% sure you’re being honest when giving them praise or criticism.

16. Use Basketball to Teach Life Lessons

Important fact according to NCAA statistics:

Which is why it’s important that coaches are using basketball as a medium to teach lessons that will impact player’s lives AFTER their years playing basketball.

Here are a few things my youth coach taught me:

Players might not realise how important these lessons are at the time (I sure didn’t), but they will eventually look back and appreciate the coaches who did this. 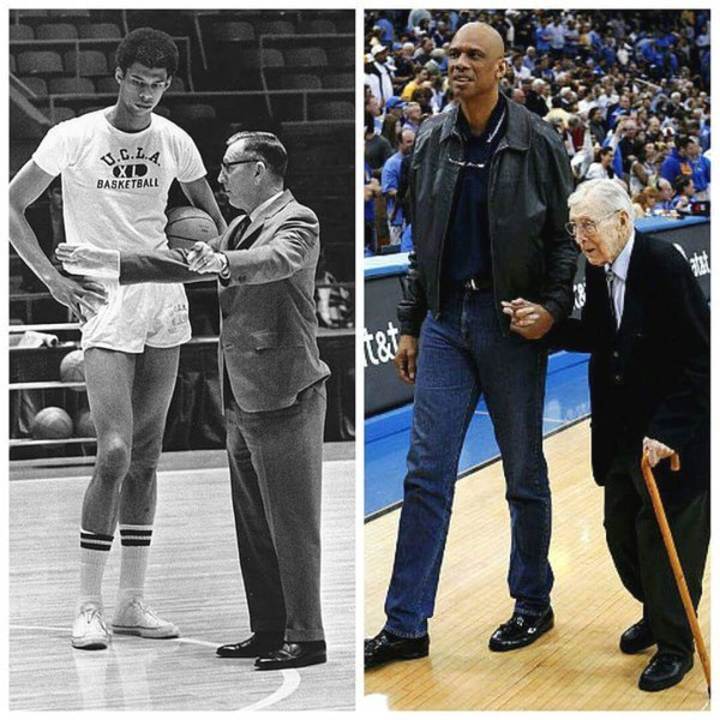 17. Set High Expectations For Each Player

Several weeks ago, I asked a bunch of people this question:

“Thinking back on the coaches you developed a deep connection with in your playing days, do you remember what they did to develop the relationship?”

Almost all of the coaches who responded mentioned that their favorite coaches set high expectations and weren’t afraid to hold them accountable.

While you might get some pullback initially (most kids aren’t used this), all players will eventually understand that your high expectations made them a far better player in the long-term.

Your expectations for each player should be different.

They’re not identical, and the expectations you put on them shouldn’t be either.

All players have different skills, talents, and potential.

You have to understand these for each individual before you can set the bar just a little higher than each player on your team is comfortable with.

Challenge each of them to get out of their comfort zone and improve.

Every coach must commit to building and strengthening the individual relationships they have with each player on their team.

It will make it easier for you to coach them…

It will improve their basketball performance…

And you’ll get the opportunity to influence their life outside of the gym.