The Mikan Drill – How it Works and 8 Important Variations 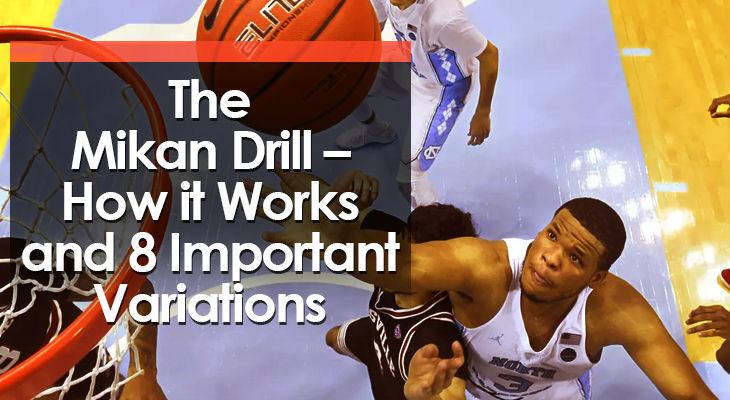 Most young players make the mistake of thinking the Mikan Drill is pointless.

They would much rather practice their long distance three-pointers than set up under the hoop and work on their finishing and layups.

But the truth is…

The Mikan Drill is one of the most important individual basketball drills a player can use.

It will improve touch, technique, and finishing around the rim.

Which are all very important for players who want to score when they attack the hoop from the perimeter or catch the ball inside a crowded key.

How the Mikan Drill Works:

​​A player starts under the basket and makes different layup variations.

After each layup, they rebound the basketball and alternate sides until they score a set number of baskets.

This Mikan drill is great for improving finishing around the basket for all players, especially centers and forwards.

It helps develop coordination, rhythm, and feel around the basket.

(1) Inside Foot - Outside Hand

(3) Outside Foot - Outside Hand

(4) Outside Foot - Inside Hand

(5) Inside Foot - Outside Hand

(7) Outside Foot - Outside Hand

(8) Outside Foot - Inside Hand

History of the Mikan Drill

The drill is named after Minneapolis Lakers legend, George Mikan.

Going by the nickname Mr. Basketball, Mikan dominated his opponents during the 1940’s and 1950’s using the hook shot he developed by using this drill every day.

He was able to finish with either hand around the basket which made him nearly unstoppable.

When he retired after the 1956 season, he was all-time leading scorer 11,764 points and had 3 scoring titles to his name.

Here are a few highlights to finish off the blog post: