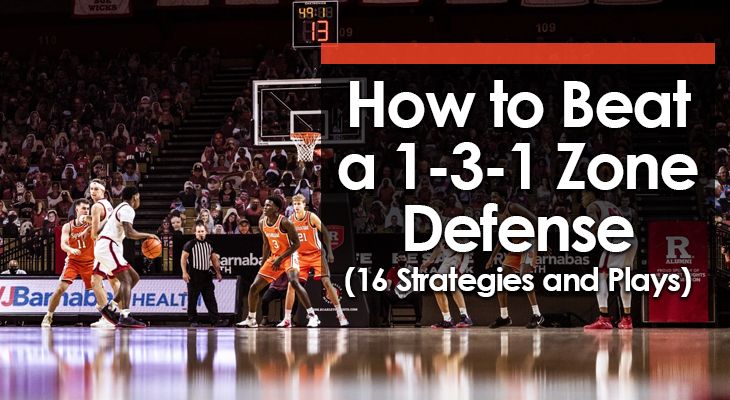 If you’ve played against a 1-3-1 zone defense, you know how effective it can be.

It’s an aggressive, disruptive, in-your-face defense that attempts to “speed up” the offense and confuse them with traps and irregular defensive positioning.

To defeat it, the offense must be calm under pressure and make smart decisions.

Below we’ll go through 16 strategies your team can use to break open a 1-3-1.

1. Use an Even Front Setup

Most teams will use an “even front” setup when playing against a 1-3-1 defense.

The two main options are:

2-3 Setup -- Two players in the slots, a player in the high post, and two players on the wings.

The point of this is to split the “chaser” at the top of the zone.

The two players at the top will usually be your point guard (1) and either a trailing big (4) or a second guard (2), but all players should understand the responsibilities of each position.

Continuing on from the last point…

Two players at the top gives you the option to easily shift the defense from side to side.

This is super effective at the beginning of the possession when the chaser first steps up to guard the ball, especially if the defense likes to trap at the top.

Before crossing the halfway line or just as the defender commits, players have the option to reverse the ball to a trailing teammate on the opposite side of the court.

This stifles any traps and forces the defense to shift to the opposite side of the floor.

The receiver will have several important seconds to attack / create if there’s a gap.

Many coaches choose the wrong player to put in the high post.

It’s common for teams to automatically put the tallest player on the team there -- which somewhat makes sense because it’s a difficult pass and they’re a bigger target -- but I’ve found teams have more success putting their best playmaker in the high post.

“Best playmaker” meaning a player who can score themselves AND create for others.

You need someone there who can quickly read the defense and make smart decisions.

Nothing you read in this article will help if your players don’t keep good spacing.

They should constantly search for and move into open space on the perimeter.

The 1-3-1 defense is effective because it creates havoc and confusion, so having off-ball players continually working to get open and find holes is crucial.

If your players are spaced correctly and constantly moving into open space, there will be many opportunities to “attack the gaps” in the zone.

The key to this is reading the defense BEFORE catching the ball.

If a player already knows there’s a drivable gap as they catch, they can immediately put the ball on the floor and attack before the defense has a chance to rotate.

The goal is to “collapse” the defense.

Attacking the gaps in the zone will force help which leaves teammates open.

“Overloading” is one of the best ways to defeat the 1-3-1 zone defense.

If your players can move the ball quickly and intelligently, open shots will appear as the defenders scramble from closeout to closeout. 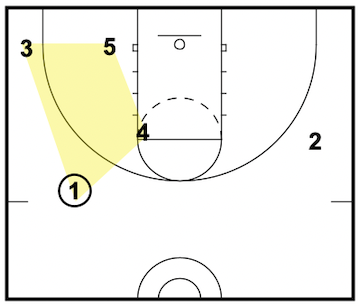 Another smart way to break down a 1-3-1 defense is to screen the top defender (the chaser).

Any offensive player can be the screener, but most coaches will have the player in the high post step out to set an on-ball screen for the ball-handler.

This can be done at the start of the possession, but it’s even more effective when executed after a ball reversal to catch the top defender off guard.

Done correctly, the ball-handler will find themselves with a ton of space to attack the gap, collapse the defense, and either score themselves or create a shot for a teammate.

Perhaps the most difficult role in a 1-3-1 defense is being the “warrior.”

This player is responsible for covering both baseline corners. That’s no easy task and requires continually sprinting from corner to corner throughout a possession.

An offensive player in the low post or short corner can make the warrior’s job even harder by screening them as they sprint the baseline.

Even if you don’t bring them to a complete stop, just slowing them down for a half-second can give a shooter in the corner a wide open look.

On-time and on-target skip passes can be devastating to a 1-3-1 defense.

The way the zone loads up to the ball makes switching to the opposite side of the court on a skip pass very difficult for the defensive team.

This is especially true for the Warrior, who is forced to sprint from sideline-to-sideline in order to cover the offensive player in the ball-side corner.

Done correctly, you’ll get many opportunities to attack late closeouts.

(these are difficult passes to throw for young players… they can get the ball there, sure… but it won’t be a powerful / on-target pass which gives a teammate time to shoot or attack before the defense rotates... and that’s a big reason why the 1-3-1 is so effective in youth basketball)

That’s an important quote for all players to remember, but it’s especially important for teams playing against a 1-3-1 zone defense.

You see, the 1-3-1 is an aggressive zone that emphasises deflections...

When playing against one, you’ll see defenders flying around the court... jump passing lanes and leaping / lunging at every opportunity, doing their best to get a fingertip on the ball.

Disciplined teams can take advantage of this aggressiveness by utilizing pass fakes.

A quick pass fake on the perimeter can open up a driving lane, and any pass fake from the high post is guaranteed to get every defender taking a step or two in that direction.

Coaches would be surprised by how many “lob pass” opportunities there are against a 1-3-1.

Due to the rotations in the 1-3-1 defense and the lack of big bodies close to the hoop, there’s often a large amount of open space on the weak-side low block.

(this is also the reason why offensive rebounding is crucial, which we’ll get to in a minute)

Remember -- you can take advantage of this action even if you don’t have players who can finish an alley-oop dunk. The receiver can catch, land, and then go back up and finish the layup.

A good offensive rebounding strategy is essential against a 1-3-1 defense.

Because of the positions defenders usually find themselves in when a shot goes up, defensive rebounding is one of the biggest weaknesses of the defense.

So you need to take advantage!

Some teams send 3 players to the offensive glass while dropping 2 back to safety, others send everyone below the free-throw line in to rebound.

Whichever strategy you choose, make sure you’re exploiting this weakness.

If your players are quick to react and aggressive in their pursuit of the ball, you're going to get plenty of offensive rebounds, 2nd chance points, and draw a ton of fouls inside.

13. Beat Them Down the Floor

As with all zones, one of the best ways to defeat them is to get down the floor quickly.

Do this by encouraging your point guard to advance the ball with a pass instead of dribbling the entire length of the floor by themselves.

Even if you don’t get a quick score, this can force defenders into poor positions as they scramble to pick up the ball to prevent a layup or wide open shot.

14. Figure Out Where They Trap

As the team’s coach, one of the first things you should be evaluating in the first 5 minutes of the game is where the opposition likes to trap.

Figuring out which traps your opponent likes to use will allow you to give players the most appropriate advice and put players in the right positions to be successful.

Teams can change it up during the game, of course… but most teams have a specific set of rules they use 90% of the time to keep things simple for the defenders.

Below I’ll share two highly-effective basketball plays to use against a 1-3-1 zone.

Both are designed to finish in an “overload” position.

So, if you don’t get a clean shot opportunity off any of the initial actions, your team is now in the perfect position to start picking apart the defense using the strategies outlined above.

Because my audience is primarily youth coaches, both plays are aimed at getting the ball inside the paint for an easy finish or to draw the foul.

Players start in a 1-4 high setup.

1. The point guard’s first option is to get the ball to one of the players in the high post.

2. Whoever catches the ball, the opposite post immediately cuts towards the basket and looks to get a deep seal on the “warrior,” who will usually be a smaller defender. If available, dump the ball inside and score an easy two-point layup.

4. If the pass inside isn’t open, players will now find themselves in an “overload” setup.

1. The point guard’s second option is to pass the ball to a teammate on the perimeter.

2. When this happens, the ball-side high post immediately steps towards the basket and attempts to get a deep seal on their opponent. If the pass is open, give it.

3. (2) takes a few dribbles towards the baseline to improve the passing angle, (5) slides across to the ball-side high post, and (1) steps towards the ball to provide an outlet pass.

Again, players will find themselves in an “overload” setup and must take advantage.

How you attack from this position will vary depending on what the defenders choose to do, but the key is exploiting mismatches and the confusion that follows as the defense attempts to figure out the best way to defend so many players on one side of the court.

1. The first option is to get the ball to the high post if they can get open.

2. On the catch, (5)’s first option is to attack or pass to the players in the short corner for an open shot or one-dribble and then they go up.

3. If those options aren’t open, (5) passes out to the ball-side corner.

4. As soon as that happens, the opposite short corner (2) steps up and sets a strong back-screen on (5)’s defender. (5) should then dive to the hoop for the potential catch and layup.

If that’s not open, the team will now find themselves in an overload position and should work to take advantage of that.

The 1-3-1 defense is effective because it’s aggressive, disruptive, and confusing.

Defenders are placed in “awkward” spots on the court that make things complicated for offensive players who haven’t had experience playing against it.

But it’s definitely not impossible to beat.

With patience, good spacing, smart ball movement, and knowledge of the most effective “strategies” to use against a 1-3-1, your team should have no trouble picking them apart.

1-4 Press Break to Score on Any Full-Court Defense