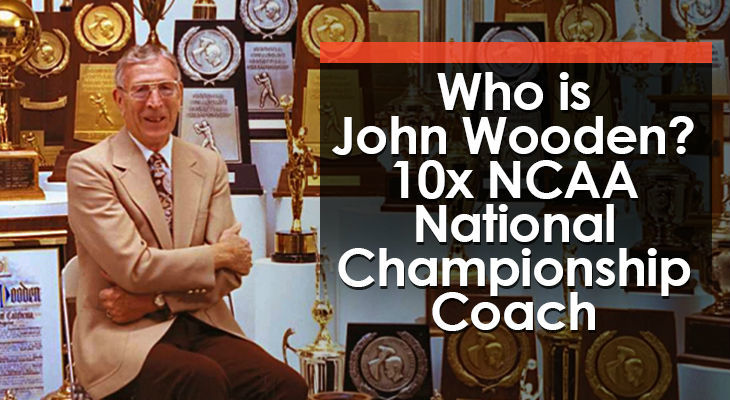 John Wooden is the greatest basketball coach of all time.

He led UCLA to 10 NCAA national championships (including 7 in a row), won NCAA College Basketball Coach of the Year 6 times, and coached an 88-game winning streak.

Through many books, stories, and speeches, he’s shared important life lessons that have inspired millions of people across the world.

He grew up on a rural farm with his parents, Roxie Anna and Joshua Hugh Wooden, and his three brothers and one sister, Maurice, Daniel, William and Harriet. John was the second oldest.

It wasn’t an easy life on the farm.

They had no electricity and money was scarce, but the hardworking boys made their own fun by creating a homemade basketball and using a tomato basket as a hoop in the barn.

By this time, he had developed his basketball skills enough to lead his school to the State Title game in his sophomore, junior, and senior seasons.

During this time, he was awarded All-State selection three times.

And, even more importantly, it’s during this period when Wooden meets his future wife, Nellie “Nell” Riley.

Wooden continued his stellar play at Purdue, leading them to two Big Ten Championships (1930 and 1932), and a National Championship in his final year (1932).

Wooden graduated in 1932 with a degree in English, and also married his high school sweetheart, Nellie Riley, in the same year at age 21.

It was at this time Wooden was offered $5,000 to join the New York Celtics, but he declined and chose to become an English teacher and high school basketball coach instead.

Which marks the start of Wooden’s legendary coaching career... 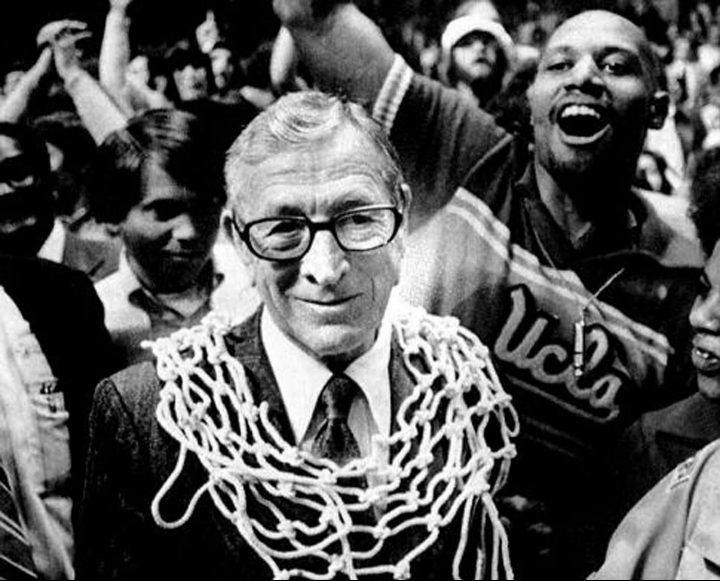 From there, Wooden and Nellie moved back to Indiana where he would spend nine seasons coaching at South Bend Central High School.

There were no National Championships won, but there was a lot of winning.

When he finished his HS coaching career, Wooden’s record was 218 wins and 42 losses.

After returning from WWII in which he served as a Navy Lieutenant, and after briefly returning to South Bend Central High School, Wooden accepts a coaching at the Indiana State Teachers College (later renamed Indiana State University).

The team’s record was 44 - 15 during this time, winning the Indiana Collegiate Conference Title in both years he was head coach.

The first year the team won, they were invited to the National Association of Intercollegiate Basketball (NAIB) National Tournament in Kansas City, but Wooden refused the invitation because they banned African-American players.

The second year they won the same thing happened…

So the NAIB quickly changed their policy, allowing African-American players to compete.

It’s only after this change that Wooden accepted their invitation, making Clarence Walker the first black player to compete in an NAIB tournament.

In 1948, John Wooden accepted the head coaching position at UCLA.

The team only recorded 3 wins in conference play the season prior to Wooden’s arrival, so he definitely wasn’t signing up to lead a team with guaranteed future success.

Quite the opposite, actually…

UCLA were a mediocre team playing in a run down gym.

Wooden quickly turned the team around.

To give a quick recap of his success, I’ll break this section down into three eras. There were winning seasons that won’t be covered in this section.

Teaching them about cooperation, enthusiasm, discipline, self-control, positive, adaptability, integrity, and many of the other traits featured on his Pyramid of Success…

They instantly became a dominant force in the Pacific Coast Conference, winning the conference title six times in eleven seasons before the PCC was disbanded.

But despite their conference success, it took a long time before one of John Wooden’s teams actually won the National Championship.

That moment finally came in the 1963-64 season, 16 long years after his first season leading the University of California, Los Angeles (UCLA).

Lew Alcindor (who later changed his name to Kareem Abdul-Jabbar) joined UCLA’s varsity team in 1967 and was immediately college basketball’s most dominant force.

He averaged 29 points and 15.5 rebounds as he led UCLA to a National Championship and another perfect 30 - 0 record.

With John Wooden leading the team, the pairing of this mighty duo resulted in three straight National Championships for the UCLA Bruins (1967, 1968, and 1969).

Other notable players on those teams where Lucius Allen, Michael Warren, and Sidney Wicks.

This run even included the “Game of the Century”. A historic game between UCLA (led by Lew Alcindor) and the University of Houston (led by Elvin Hayes).

The team achieved a perfect 30 - 0 record in his first Varsity season, completely crushing the opposition as the team won by an average of 30+ points per game.

They didn’t let up in the second season either…

It wasn’t until the 1973-74 season that the Bruins would find a worthy opponent.

Their 88-game winning streak came to an end against Notre Dame, and then they lost their NCAA semi-final game to North Carolina State.

John Wooden announced his retirement in 1975 at age 64.

In total, he led the UCLA Bruins to 10 National Championships and a 620 - 147 record during his 27 seasons with the program.

An incredible effort by one of the best basketball coaches of all time. 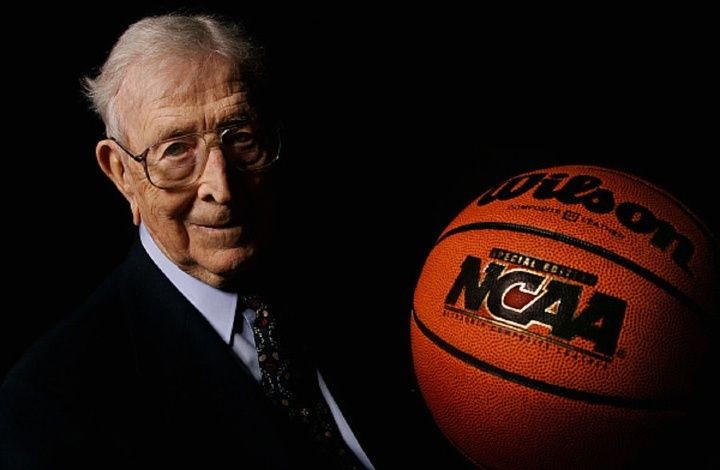 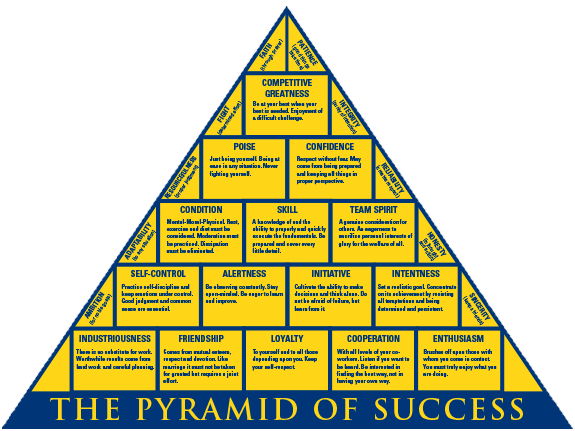 By the time John Wooden arrived at UCLA, he had finished putting together the well-known diagram that we know as the “Pyramid of Success”.

It contains 15 traits / characteristics that Wooden believes will help anyone achieve success.

Much of Wooden’s life philosophy is based on a small card that his father gave him upon graduating from elementary school.

On it, there were “Seven Things to Do”.

In 1948, John Wooden had decided to coach the University of Minnesota.

He set up two phone calls.

His initial plan was to accept the offer from the University of Minnesota, and then politely decline an offer from UCLA when they called later in the evening.

But that’s not how it worked out…

Due to a snowstorm disrupting the phone lines, Minnesota were unable to get through on time.

Having not yet heard from Minnesota (his first preference) when UCLA called at 7pm, Wooden accepted their offer.

When Minnesota were finally able to contact him later that night, Wooden apologized to the saying that he had already given UCLA his word and he wouldn’t go back on it.

That’s the type of person John Wooden was.

With the help of several writers, John Wooden co-wrote many books after retiring from his coaching duties at UCLA.

Here are 13 you should check out:

1. Wooden: A Lifetime of Observations and Reflections On and Off the Court

2. Wooden on Leadership: How to Create a Winning Organization

3. They Call Me Coach

5. The Essential Wooden: A Lifetime of Lessons on Leaders and Leadership

6. My Personal Best: Life Lessons from an All-American Journey

7. A Game Plan for Life: The Power of Mentoring

8. The Wisdom of Wooden: A Century of Family, Faith, and Friends

9. Coach Wooden One-on-One: Inspiring Conversations on Purpose, Passion and the Pursuit of Success

10. Inch and Miles: The Journey to Success

After coaching for 40+ years, writing 13 books, and speaking for an audience 100’s of times, you can imagine that there are thousands of John Wooden quotes I could share.

Here are a bunch that have had the biggest impact on me:

"When you punish a player for making a mistake or falling short of a goal, you create an environment of extreme caution.”

"I was proud when my wife Nellie told an interviewer, ‘I never could tell whether John had a good practice or a bad practice, because he never brought it home.”

"Champions never complain, they are too busy getting better"

"If a player says that he does not like to score, he is either a liar or he is abnormal. Either way, I don't want him on the team."

"Promise to be just as enthusiastic about the success of others as you are about your own."

"My philosophy of defense is to keep the pressure on an opponent until you get to his emotions."

"The better conditioned team will probably win in the long run"

"I continually stress to my players that all I expect from them at practice and in the games is their maximum effort."

"I found the bench to be the greatest ally when I had to make individuals comply with what was best for the team."

"I would spend almost as much time planning a practice as conducting it. Everything was planned out each day."

"When opportunity comes, it's too late to prepare."

"A coach is someone who can give correction without causing resentment."

"You can't let praise or criticism get to you. It's a weakness to get caught up in either one."

"Leaders are interested in finding the best way rather than having their own way."

"The greats understand that becoming a little better every day is how you become a lot better over time."