5 Layup Drills You Must Use Next Practice 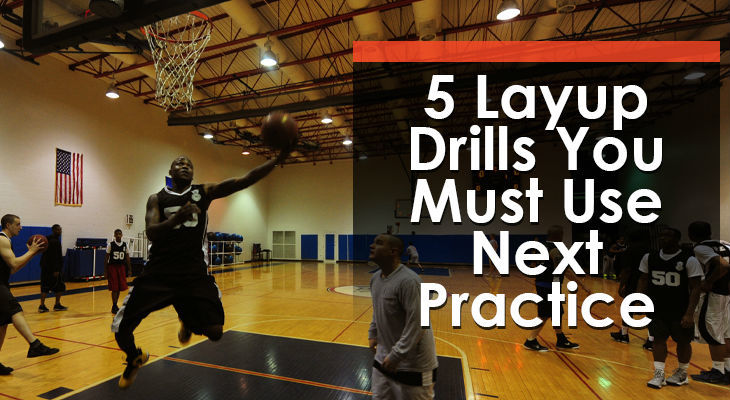 All basketball coaches need a good variety of layup drills to pick from.

These all work on different situations players will find themselves in during games.

In this blog post, I’ll give you drills that will fit any situation.

The first two layup drills will set the foundation.

Players will learn how to execute a layup perfectly (drill one), and then they’ll learn a great individual drill to practice a variety of layups by themselves(drill two).

The next two layup drills are competitive.

I’ll show you a fantastic 1-on-1 drill that will simulate in-game pressure (drill 3), and then we’ll transition to a competitive half-court drill (drill 4).

Players practice performing a layup off 1 step, 2 steps, using one dribble, and then practice full-speed layups from the three-point line.

Developing great layup technique for all players. It’s important that players learn the basic technique before they use them in practice and games at game pace.

Both Sides - Players must learn how to perform a layup with the right technique using both their left and right hand.

A player repeatedly attacks the rim for 2 minutes finishing at the basket with a different variation of a layup every time. On each drive, they must vary the angle of the shot.

This drill allows players to practice their finishing at the basket with different variations of a layup.

Angle and Distance - As long as you’re retreating to random spots behind the three-point line, the angle and distance you release the shot from will vary naturally.

Finishing - Mix and use all kinds of different moves to finish, and switch between one foot and 2-foot contact.

Zig-Zag Floaters - Only use floaters - switch between one foot and 2-foot contact.

Two players start in the corner of the court, one on offense, one on defense. An offensive player dribbles around the 3-point arc and must attack and score against the defender, who can’t go inside the arc until the offensive player goes attacks.

Great one-on-one drill for both offense and defense that I first seen posted by Alex Sarama. The offensive player practices finishing at the hoop with a trailing defender pressuring them, while the defender practices contesting the shot from behind without fouling the shooter. 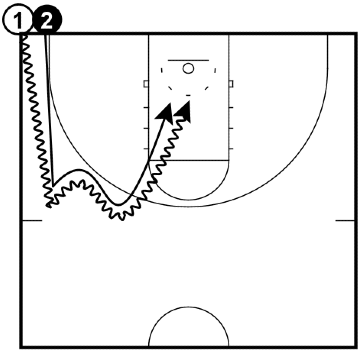 The two outside lines are on offense and the middle line is on defense. The coach passes the basketball to an offensive player and all 3 players sprint up and around the cones and then compete in a 2 on 1 transition situation.

Allows the offensive players to work on decision making on the fast break and the defender to work on defending at a disadvantage. 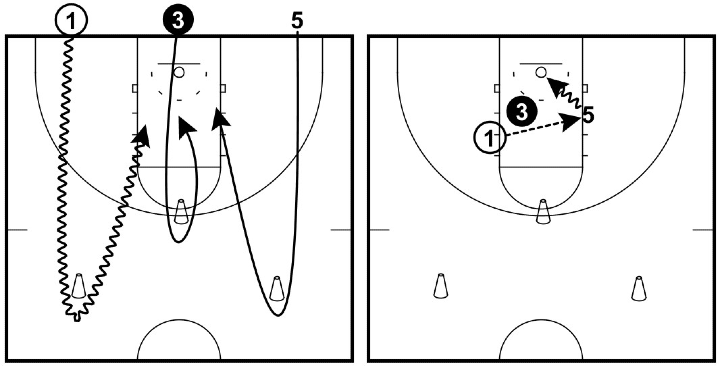 Distance of Cones - You can adjust the distance of the cones to be further away or closer to the basket.

In this continuous drill, players will make a long pass down the floor and then sprint down the court and receive a pass from another line for a layup.

A great conditioning drill that works on long passing and finishing layups at full speed. 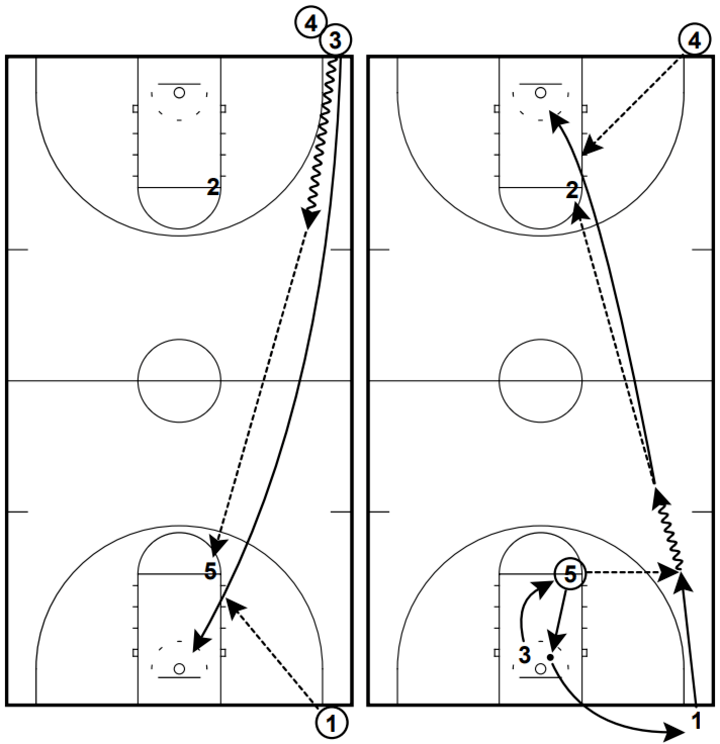 Coach on the High Post - This drill can get very confusing if you have a young team. An easy way to make this drill simpler is to put a coach or parent on each high post. Then players just rebound their own shot and rotate through the one group at each end of the floor.

Ball Can’t Touch the Floor - For older players who can pass the full length of the court challenge them to not take a dribble before passing. The only time the ball should hit the floor is after the layup. Every time the basketball hits the floor the team loses one point.

One crucial trait all youth coaches must possess when running layup drills:

Despite how easy they might seem to you, there are many small things players must grasp before layups become second nature to them.

> When to start their steps

> Knowing which angle to attack

> Which part of the backboard to use

> Getting comfortable finishing against defenders

These are all subtle things that experienced players don’t even think about anymore, it all becomes instinctual after many years of practice and competition.

But for kids who are just learning the game, this process requires an incredible amount of focus.

Don’t be surprised when they miss A LOT of easy layups.

They’ll start to make them as they build on their experience.