Why Players Miss So Many Layups (And How to Fix It) 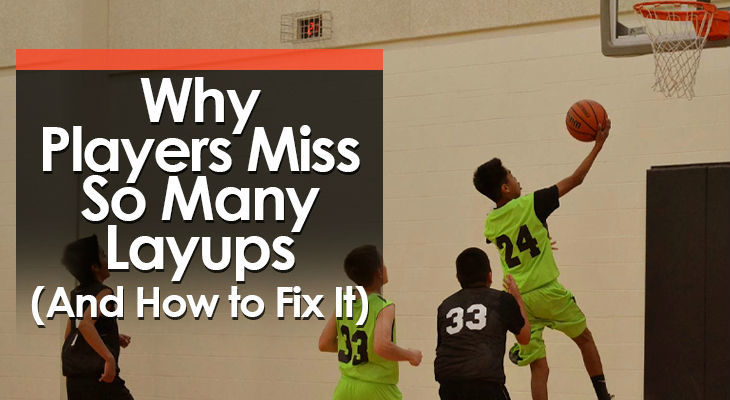 There are several obvious reasons why youth basketball players miss a large percentage of the layups they attempt:

(a) Lack of experience / practice

(b) Lack of strength

All of these are important to acknowledge, but that’s not what we’re going to talk about today.

Here’s the “frustrating” topic we’ll be trying to fix.

Why players miss layups during games that they usually make during practice.

There are a lot of reasons why this happens.

And fortunately for everyone, this can be an easy problem for coaches to fix as long as they’re willing to make a few basic changes to their team practice plans.

In this article, I’ll tell you (1) why making layups is crucial in youth basketball, (2) the four reasons why your players miss so many layups, (3) then I’ll share three great layup drills that will improve your team’s in-game finishing at the rim.

Success in youth basketball (boys and girls) often comes down to which team can make the most amount of shots close to the basket.

Because 90% of made shots come from inside the paint.

That may be a bit of an exaggeration depending on how talented and skilled the players in your area are, but it’s common in a lot of games.

It's incredibly difficult for young players to become consistent outside shooters due to (a) lack of strength and also (b) lack of practice time.

Which is why young teams must spend a lot of time working on their layups.

(and NBA players too, apparently)

4 Reasons Why Players Miss So Many Layups

How many times have you watched one of your players attack the rim and then throw up an odd-looking fadeaway layup while falling out of bounds?

There are two reasons why players will make this mistake:

(b) To avoid getting their shot blocked

They would rather angle away from the basket and attempt a much higher difficulty shot than attack the defender, draw contact, and then sink their free-throws.

Players MUST learn how to play through contact and then finish the shot.

2. Not Practicing Against Real Defenders

Another big factor contributing to missed layups is that players aren’t competing against live defenders as much as they should be.

In most youth practices I watch, layup drills involve players jogging around the court and attacking the hoop with absolutely zero pressure.

This is beneficial to teach technique, but then coaches need to make drill more game-like.

So unless the drill is technique-focused, all layup drills must:

(a) Involve players competing against each other

(b) Teach players how to finish with a variety of layups (floater, euro step, etc). 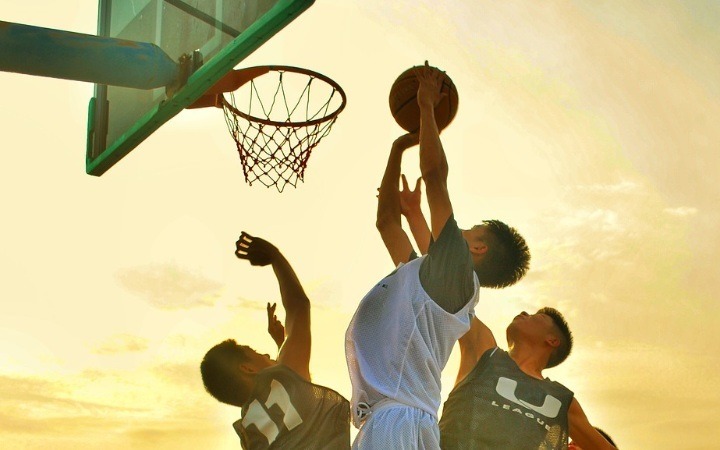 The next problem is players not having a variety of finishing moves to use when they attack the hoop and find themselves face-to-face with a defender.

Finishing with a regular layup won’t always be an option.

If a help defender steps across to challenge the shot, players need to know how to adjust and finish without getting their shot blocked.

Teach all of them to give your players options.

Also, to give you an idea of why all these shots are important to learn, take a quick look at this video of an U14's game I found on YouTube.

I compiled all the layups that were attempted throughout the game.

I just pulled a random U14’s game from YouTube and pieced together the layups attempts throughout the game.

Notice that 99% of them are contested, difficult shots.

Are these the layups your team is working on during practice? pic.twitter.com/zcmXsBGfMk

Not many wide open layups, is there?

Just something to keep in mind.

4. They’re Thinking About Missing the Shot

Your players will miss far more layups during GAMES than they do during PRACTICE.

This can make a coach pull their hair out.

You’ll spend an entire game sitting on the bench thinking about how your players were making 80% of their layups during team practice that week, but now they’re barely even making 10%.

This one thing is a big factor:

During practices, players know that it doesn’t really matter if they miss the shot.

But during games, things are different…

Everyone’s watching, and the consequences for missing are much higher.

And then the self-doubt starts...

> “What if I miss this wide open layup?”

> “Come on, you missed the last one. You can’t miss this”

For coaches, the best way to help players with this problem is to not make a big deal out of winning and losing games.

Players will feel a lot less pressure if the coach’s main focus is fun and development. 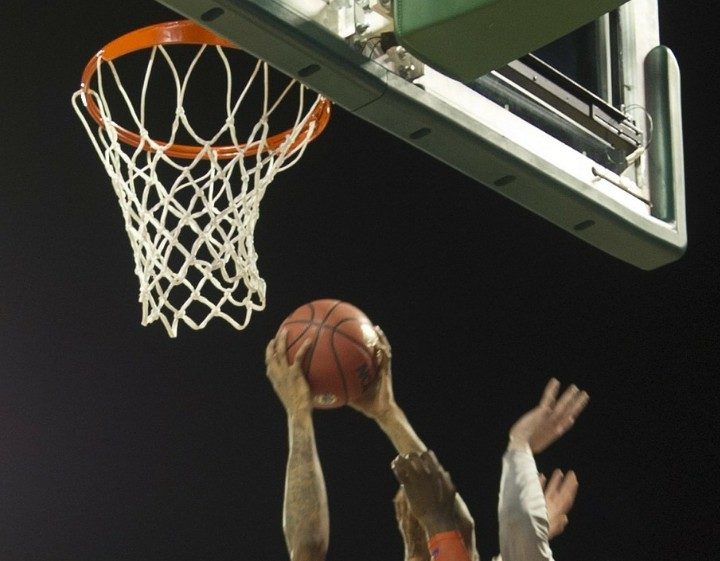 3 Competitive Layup Drills You Should Use

Straight into the drills...

Two lines of players on the baseline at each end of the court. The offensive player starts with an advantage and sprints the court and must lay the ball up while under pressure from the defensive player.

To allow players to practice layups at full speed while under pressure from a defender. This drill also works on chase-down defense. 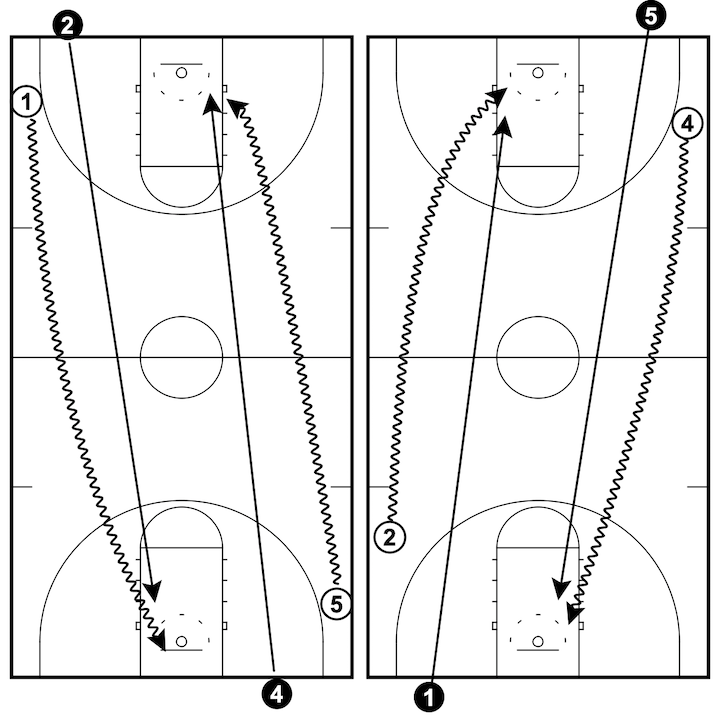 Opposite Side of the Floor - Perform the drill from the other side of the floor so that the players have to dribble and make a layup with their left hand.

Competitive - Play until a player makes a certain amount of layups.

Players start in two lines on the baseline and a coach starts between the three-point line and half-way with a basketball. On the coach’s call, the two players sprint out and around a cone an even distance away. The coach passes to either of the two players and they attempt to score on the other player.

It’s important that players practice layups while under pressure from a defender. This drill works on finishing at the ring and also defense.

Players Pass the Ball - I’m a big advocate of players doing the passing in drills whenever possible. In this drill you can have a player make the pass from the top. The only reason I’d caution this approach is because it involves the passer choosing who to pass to. You don’t need other players accusing a teammate of favouring.

Distance of Cones - You can change either or both of the cones so that they’re closer or further away from the ring.

This is a full-court continuous 3-on-2 drill. Three players attack two defenders and regardless of if the if the offensive team scores or turns the basketball over, one of the two defenders outlets the basketball to a player at mid-court and then attack three on two at the other end of the court.

By always having an extra offensive player, the players learn that they must space the court well to get an open shot or layup on each trip down the floor. This is one of my favourite drills for improving decision making. 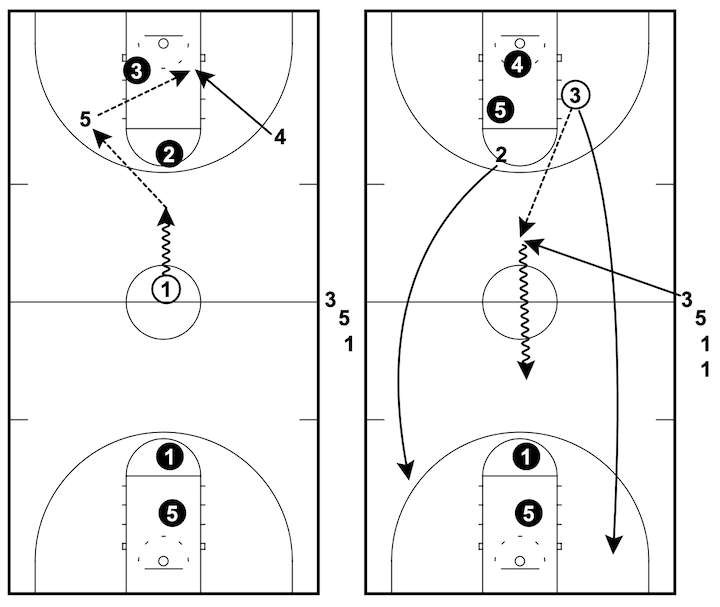 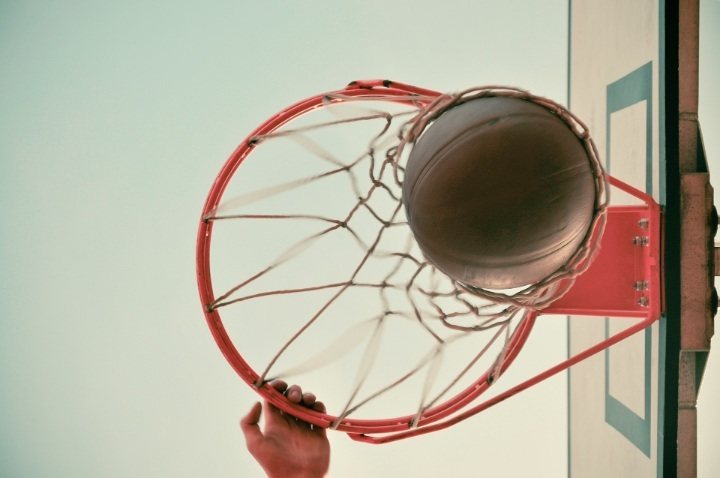 While doing research for this article, I came across a blog post on ESPN.

And their answer to fix players missing so many layups was this:

“Missed layups are a plague for which few administer the sure-fire cure: practice. More and more these days you see teams unveil impressive and intricate warmup drills that don't involve layups. What happened to the old-fashioned layup line? Too often we see players running onto the court and the first practice shot they take is a 3-pointer. Fundamental shooters are taught to practice inside to out.”

While I agree with the latter part, the answer to this issue is NOT more boring layup lines.

Layup lines are great when players are just starting out. They allow players to focus on correct footwork, finishing with both hands, players aren’t rushed, etc...

But its benefit quickly tails off once your players have mastered the basics of layups.

Which is why I recommend competitive layup drills to improve in-game layups.