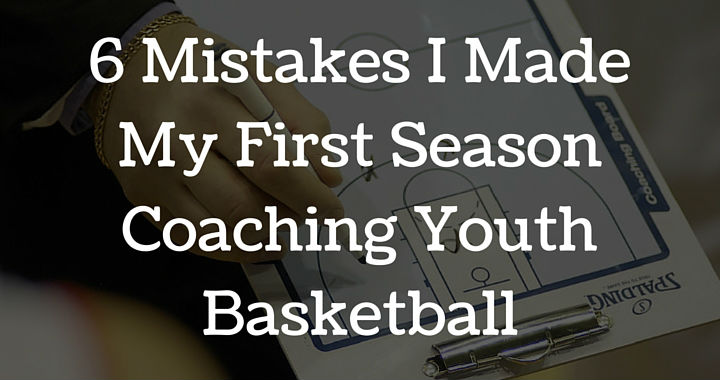 My first year coaching youth basketball I had the privilege of coaching an under 12 boys basketball team that was made up of nine wonderful kids between the ages of 9 and 10.

Being my first time, I grew tremendously as a coach throughout the season. I was constantly being put into new, challenging situations that allowed me to gain more life and basketball coaching experience.

But, as much as I enjoyed it, the season definitely wasn’t the perfect start to my coaching career that I had initially hoped for…

We lost… A lot… Many, many more games than we won.

While this disheartened me at the time, by reflecting on the season I was able to learn a lot about what I did right and what I did wrong during my first season coaching.

When the season was over, I asked myself these two simple questions…

In this post, I’m going to share with you 6 things I didn’t do well during my first season coaching youth basketball.

1. I Viewed the Results as a Reflection of My Coaching Ability

After the losses started piling up, I remember asking myself ‘what am I doing wrong?’ What were the other coaches doing that I’m failing to do?

As time has passed and I developed my coaching knowledge further, I’ve realized how silly it is to correlate coaching ability with the results of your team.

There are two main reasons why I believe this:

a. In youth basketball, more often than not it’s the team with the most talented and skilled players that will win.

Coaches don’t make as much difference as some would like to think in the short-term.

Some coaches might point out that it’s the coach who develops the skill of the players, and, therefore, the results of your team do reflect your ability to coach.

To these coaches, I would point out that the current skill level of your players will depend a lot more on all the coaches who have trained the players before the current season.

It’s unfair to grade a coach’s coaching ability on a team they’ve only been training for a couple of months.

I love this quote from Jeff Van Gundy…

“Your greatness as a coach isn’t tied to the greatness of your players. Anyone who thinks otherwise doesn’t understand coaching.” – Jeff Van Gundy

b. Some coaches will use tactics that allow their team to win basketball games at a young age, but that hinder their players for the future.

Running a zone defense and encouraging your best players not to pass the basketball to the weaker players will definitely result in wins, but don’t do much for improving the team in the future.

Does running a zone defense that allows your team to win and under 10’s game make you better than the coach of the losing team who played man-to-man all game? Not to me it doesn’t.

Key Takeaway: The numbers in the win and loss columns don’t reflect your ability to coach basketball.

Numerous times throughout my first season I made the mistake of splitting my team up into ‘bigs’ and ‘smalls’.

I now firmly believe that this should not happen in youth basketball.

As youth basketball coaches, we must prepare players to play all positions on the basketball court because we have no idea how they’re going to develop in the future.

A prime example of why we must train players to be positionless from a young age is current NBA superstar, Anthony Davis.

Davis is currently regarded as one of the most dominant post players. As a youth basketball player, Davis had always trained and played the guard position. But then between his sophomore and senior years of high school, Davis grew from 6’2″ to an incredible 6’10” (source).

This incredible growth spurt meant that Davis now ‘has the fundamentals and movements of a guard within the body of a center’.

Do you think working on dribbling and outside shooting instead of restricting him to staying under the basket helped Davis become the player he is today? I do.

Key Takeaway: Prepare players to play all positions on a basketball court. You never know what position they will be playing in the future.

3. I Implemented a Full-Court Press

Yep. I was once one of those coaches who implemented a full-court press in an under 12’s basketball game.

Thankfully, those days are in the past and I won’t be returning to them.

At the time, there was one specific reason why I implemented a full-court press. Can you guess why?

By spending about 15 minutes on the press twice per week, our team got reasonably good at the 2-2-1 full-court press and that was often the main factor in the games that we did win.

But if I was to coach that season again with my current knowledge, I wouldn’t run a full-court press again.

Here are the two main reasons why:

2. Coaches of youth basketball shouldn’t spend valuable practice time implementing a full-court press (I’ve watched some coaches spend over half of every practice practicing their press). Spending extra time on skill development and small-sided games will be far more beneficial for the players’ future.

Key Takeaway: Full Court presses and zones take up valuable practice time that can better be used developing players for the long-term. They also rob players of the opportunity to play man-to-man defense and half-court offense which is much more important for their development.

4. I Didn’t Give My Team a Chance to Succeed

Unlike some coaches that will drop their team back into a division or league that they’re confident they will win, I wanted my kids to play against the best competition.

And, to be honest, it was a mistake. They simply weren’t up to it.

But I was stubborn and kept entering them in the top division even when we had the opportunity to enter in a lower division where they would have had more chance of experiencing success.

My intentions were in the right place. The team was progressing rapidly by playing against better competition and since development (not wins) was my main focus, I thought I was doing the right thing.

Teams that we lost to by 30 at the start of the season we were only losing to by 10 points towards the end of the season. We were closing the gap. But we weren’t there yet.

What I failed to take into account was the age of the players and their mindset. These 9 and 10-year-old kids weren’t thinking about how good they could be in the future like I was. They wanted to have fun and compete. They didn’t want to get beaten every single game they played.

Getting blown out by 30 points every game is going to make every 10-year-old player want to quit no matter how much they improve in the process.

Key takeaway: While playing against better competition is important for improvement, give your players the opportunity to experience the joy of success.

As I’ve said many times, small-sided games are the best way to teach basketball to kids. They’re unpredictable, super fun, and everything that players experience is transferrable to games.

While we ran some small-sided games during my first season, we definitely didn’t utilize them enough.

Lately, I’ve been suggesting coaches use SSG’s for at least 25% of their total practice time. So if you have an hour-long practice, use small-sided games for at least 15 minutes at the absolute minimum.

I’ve also written an article explaining 8 reasons why you must use small-sided games.

I encourage you to check out that article to get a deeper understanding of the 8 reasons, but here they are to save you a click.

1. Players get more touches.
2. Easier decision-making.
3. More scoring opportunities.
4. Increased space.
5. Involves all players.
6. Breaks the game into chunks.
7. Eliminates zones and presses.
8. Teaches players when to use a skill.

Key Takeaway: Small-sided games are great for teaching basketball to players. Use them!

6. I Used Some Terrible Drills

One of the biggest problems that new coaches run into is knowing which drills they should use to best improve their players.

A tendency of many new coaches is to simply use the drills that they used to run when they were players. Depending on how good your previous coach was, this can be a good or bad thing to do.

As for me, I wasn’t familiar with a large number of drills at the time so my options were limited. Looking back now, it’s painfully obvious that some of the drills I used didn’t improve the team as much as I would have liked.

Since my first season coaching, I’ve spent an enormous amount of time researching the best drills to use for youth basketball.

Key Takeaway: Use basketball drills that really improve your players. Not just the ones you used when you were younger. Do the research and find the right drills!

If you’re an experienced coach, I bet you can relate to a lot of my mistakes.

If you’re a beginner coach, learn from the mistakes that I made so that you can avoid making them yourself.

It’s important for all coaches to evaluate their coaching after a season and find areas they can improve on in the future. Dedicate some time to think about this and be honest with your answers. I did and it taught me a lot.

“Admit to and make yourself accountable for mistakes. How can you improve if you’re never wrong?” – Pat Summitt

While I wouldn’t change the experiences, relationships, or memories I made in my first season for anything, I definitely learned a lot from it in regards to coaching.

Now I want you to share with the BFC audience…

“What mistake did you make in your first season coaching basketball?”