The Offensive Guide to the Pick and Roll

The pick and roll is one of the most effective, oldest, and most commonly run basketball plays in history.

It was first made into an art form by John Stockton and Karl Malone at Utah. It can be devastating against any defense when the players know how to run it properly.

Overview of the Pick and Roll

Before I get into the finer details of how to efficiently run the pick and roll, let’s go over what exactly a pick and roll is.

At the most basic level, a pick and roll is an offensive play that involves a player setting a screen for a teammate that has the ball. 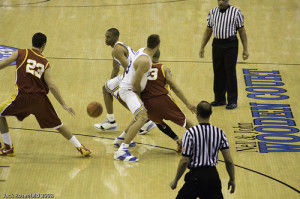 You want the person with the ball to have great decision making, passing, and dribbling skills. The person setting the screen is usually a forward or a center.

For this article I’m going to assume the centers and forwards and setting the screen, and the guards and dribbling the ball.

The most important thing is for the guard with the ball to have great decision making, passing, and dribbling abilities as they are the ones that will be in charge of creating the play.

It can be run from anywhere on the court, but most coaches only run it from either wing or at the top of the 3-point line. These are the places where the guard will have the most space to create.

Now let’s get into the main things each position should be doing to make the pick and roll successful.

I’m going to provide you with step-by-step instructions on what each player should do.

Here are the 5 requirements of the guards to running a successful pick and roll.

Here are the 5 requirements of the forwards and centers to running a successful pick and roll.

Recap: The 5 center and forward requirements.

But what about the other 3 players?

If you were thinking that; good question. Because the other three players on the court are just as important in the pick and roll as the two running it.

The other three players must space the floor.

They must recognise the pick and roll is happening and spread out accordingly. This generally involves them moving outside of the three-point line so that the guard has space to create a play.

Assuming that the three players can knock down the outside shot, if any of the defenders drop in to help out guarding the pick and roll, the guard can pass to the open player for the wide open shot.

Do you use the pick and roll in your offensive system? You might be able to add something to help out other coaches. Leave a comment below with any suggestions.