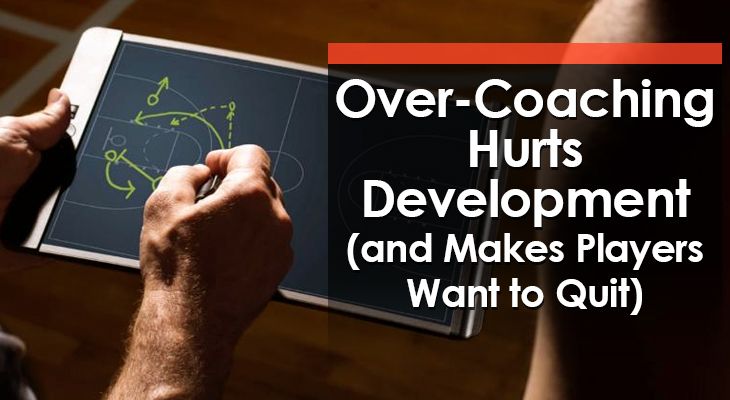 We’ve all seen it thousands of times before…

A coach pacing the sidelines continuously barking orders at their players.

The loudest coaches can often steal the show, making sure everyone knows they’re in charge.

They’re the red-faced coaches growling through a timeout huddle, snarling at players every time they make a mistake, and snapping the whiteboard when the referee makes a bad call.

All of these coaches have something in common:

At the youth basketball level, over-coaching runs rampant, with some grown men and women looking more like rabid dogs than the teachers and mentors they should be.

This approach does far more harm than good.

Sure, a player botching a set or making the wrong read can be frustrating, but the sideline explosion from the coach never makes things better.

The problem with over-coaching at the youth level is simple:

It hurts development and robs young players of the joy of the game.

Over-coaching can be hard to define, but you definitely know it when you see it.

You can hear it as well.

Step into any gym hosting a U10’s tournament and the coach’s shouts will usually outnumber the squeaks of sneakers.

For the most part, over-coaching involves flooding players with too much information.

If you want an example of this happening, think of the last time you watched a coach micromanage an entire possession from the sideline.

When this happens, young players become paralyzed with indecision.

The coach is yelling “make the extra pass!”... their father screams out “shoot it!”... while the player’s initial thought was to attack the hoop.

Panicked and overwhelmed from all the instructions conflicting with their instincts, the player either (1) does nothing or (2) makes a mistake.

This pressure paralyzes them and makes playing “in the moment” almost impossible.

Here’s what John Wooden had to say about the topic:

“Over-coaching can be more harmful than under-coaching. I think the tendency is for inexperienced coaches to give too much information. The younger coach sometimes is going to try to impress his youngsters with how much he knows. If you over-coach you don't do many things well.”

Examples of Over-Coaching in Basketball

The main example I’ll refer to in this article is coaches constantly telling players what to do during games, but “over-coaching” comes in many different forms:

1. Adding too much “strategy”

Expecting kids that young to learn and retain that much information is absurd.

2. Making too many changes during a timeout

When you speak during a timeout, I always recommend keeping to 1 or 2 points of info.

Any more than that and players will be so overwhelmed they’ll forget everything.

3. Giving a player too many responsibilities

If you take a player to the side before the game and give them 6 things to remember, they’re going to be overwhelmed and forget the vast majority of it.

Again, too much information just leads to confusion.

4. Too many corrections when teaching shooting form

“Bend your knees more, turn your feet slightly, get your elbow in, don’t flick your balance hand, make sure you hold your follow through, etc” -- it’s too much!

Identify the biggest problem and focus on that instead of blasting a player with 100 cues.

Check out this terrific video of Nolan Richardson speaking about over-coaching:

Because it comes in many different forms, over-coaching negatively impacts players in a variety of different ways.

Here are just a few of those:

1. Players get confused and nervous

The most obvious reasons are that over-coaching leaves players confused and nervous.

Confusion leads to nervousness, which results in apprehensive and poor decisions (mistakes).

2. Players don’t make their own decisions

When a coach is shouting out exactly what to do, players are following orders instead of reading the game and making their own decisions.

And if players don’t get to make their own decisions, they won’t gain experience and learn.

Barking orders at a player shows you don’t have trust in them.

Players don’t want (or need) to be told what to do every second of the game.

And they definitely don’t need to hear you shouting every time they make a mistake.

4. Players will stop listening to you

When you say less, what you do say will have a bigger impact.

If you never stop talking on the sidelines, players will start to tune out.

5. Takes players out of their “flow” state

And when players are thinking too much, it’s impossible for them to play at peak performance.

6. Takes the fun out of the game

This should be self explanatory after reading the 5 other reasons.

How is a kid meant to have fun when they’re confused, nervous, and lacking confidence?

There are a variety of reasons why over-coaching is so common.

Let’s break down a few of the main motives:

1. They want to show everyone they’re in charge

Sadly, some of the youth coaches you come across have enlarged egos.

When they’re coaching, these people want everyone to know how smart they are.

They want to be seen as the authority figure… the reason for the team’s success… so they patrol the sidelines and use a loud voice to show everyone how much knowledge they have.

They want to be the “chess master” moving their little chess pieces around.

2. They feel pressure to win and prove themselves

Similar to the above point, except these coaches have less ego and are more insecure.

This is often true for beginner coaches in their first or second seasons.

3. They don’t realize it hurts development

There are also those who will over-coach simply because they don’t realize how much it hurts development and enjoyment for their players.

(I’m writing this article for these people)

Many of these people will change their ways once they realize the truth.

4. They don’t realize they’re doing it

It’s easy to get caught up in the moment as a basketball coach.

Something I recommend all coaches do at least once is stick on a microphone and record yourself during games and practices.

You’ll be surprised how pointless and incoherent most of what you say is.

5. They lack faith in their players

Another time over-coaching occurs is when coaches don’t believe in their players.

This lack of faith manifests through the flood of information that characterizes over-coaching.

These coaches try to control every bit of motion and every decision.

Truth is -- it can be hard to just sit down on the bench and keep quiet.

As a coach, you’ll feel like you should be actively doing “something” that helps the team.

This isn’t always true, as Phil Jackson tells us:

"If there’s any misconception about coaching, it’s that we’re not engaged if we don’t scream at the referees or pace the sidelines."

What Coaches Should Do Instead:

What coaches should do instead varies depending on what kind of over-coaching is happening.

Below, I’ll give a few scenarios and how I recommend fixing them.

1. Instead of patrolling the sidelines constantly shouting…

Spend more time sitting down on the bench with your mouth locked shut.

Realize you’re doing more harm than good micromanaging every possession of the game.

Install one good motion offense like the 5-Out Motion or Read and React.

These have multiple options from every spot, so you’ll have no problems attacking any defense.

3. Instead of giving 14 “pieces of advice” during a timeout…

Focus on the one or two most important changes that need to be made.

4. Instead of giving a player too many responsibilities…

Same as the advice about timeouts.

If you want a player to remember what you said and execute on the floor, stick to one or two points instead of overwhelming them with hundreds of snippets of information.

5. Instead of making 5 corrections to a player’s shooting form...

Focus on one change that will make the biggest impact.

Then, give them time to make the change and figure it out.

Once they’ve done that successfully, move on to the next thing.

As I conclude the article, there is one thing I want to make clear.

Most of the adults who over-coach do so because they truly want their players to be successful, and they believe giving their team as much information as possible is going to help.

(There are those who do it primarily because they want to be the center of attention, of course, but that’s far from the majority.)

Knowing this gives me hope.

Coaches who learn about the negative impact of over-coaching and make changes to their behavior will create an environment to maximise development and enjoyment.