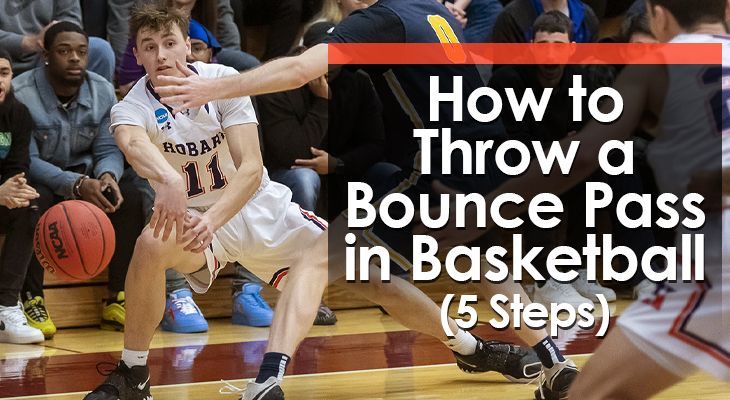 Every basketball player, regardless of style of play or position, must be able to throw an accurate bounce pass.

It’s a fundamental pass in basketball.

A bounce pass unlocks different angles that might not have been possible otherwise.

It’s something coaches should teach their players early into their basketball journey.

I wanted to touch on that subject today by offering you some tips that will lead to better, faster, and more accurate bounce passes.

How to Throw an Accurate Bounce Pass

Step #1 - Is the Bounce Pass Possible?

Many young players fall into the trap of forcing certain passes during a game, even in situations that don't call for it.

There’s a time and a place for everything, including the bounce pass.

Players should always take a quick moment to consider whether a bounce pass is their best option before throwing it.

Since a bounce pass is slower than a direct chest pass, you should always use chest passes when possible.

Save the bounce passes for situations where an opponent is in the way and might deflect a direct chest pass.

Also, it’s not ideal to use bounce passes over long distances.

Bounce passes work best over short distances with a single opponent between you and your teammate.

Stance generates power, and you want to maximize that power for your pass to reach its target as fast as possible.

Before getting all fancy with one-handed passes, it’s crucial to first learn the proper passing technique before improvising:

(1) Take the ball with both hands and hold it up to your chest.

(2) Take a step forward with either foot. It’s better to take the step with your dominant foot but your preference might differ - which is perfectly fine.

(3) As you step forward, push off with your back foot and release the ball with both hands.

(4) Keep your back straight and slightly tilt your upper body forward for maximum power. 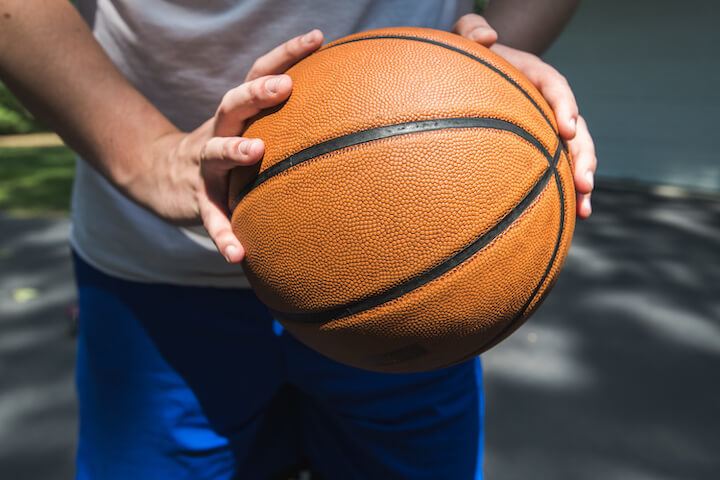 Step #3 - Pick the Spot of the Bounce

The most important decision you’ll make when throwing a bounce pass is:

Choosing where the ball will bounce.

This can be the difference between a successful bounce pass and a stolen one.

So, where should the bounce occur?

If the defender is positioned halfway between you and your target, you want the ball to touch the floor right next to the defender.

It will be difficult for the opposing player to bend to the lowest point of the pass, thus minimizing the chance of a turnover.

This also puts the ball in the optimal position for your teammate to catch.

If there’s no defender and you’re passing over a longer distance, the ball should bounce approximately two-thirds of the way to your target.

What if the ideal scenario isn’t there?

Again, do not force a bounce pass if the situation doesn’t call for it.

You've probably heard how important a follow through is when shooting.

The same goes for throwing a bounce pass.

When you release the ball, both thumbs should point towards the floor with your arms fully extended.

Doing it right ensures you put the maximum possible power behind your pass.

But don’t stay frozen in the follow through position.

The game is still going on and making a pass doesn’t take you out of it.

Stay focused and proceed to your next play immediately - whether it’s a cut, a screen, a spot-up for a shot, or something else.

Step #5 - Pass to Where Your Teammate Will Be

This tip applies to situations where the passing target is on the move.

In this situation, you have to predict your teammate's future position.

When they’re in motion, aim your pass to where your teammate will be rather than where they are at that moment.

If you’re throwing a bounce pass, you need to adjust the lead a bit more to account for the reduced speed of the pass.

Remember that the amount of lead will increase with distance.

If you’re having problems determining exactly how much lead you need, don’t worry, you’ll get better pretty quickly through practice and experience.