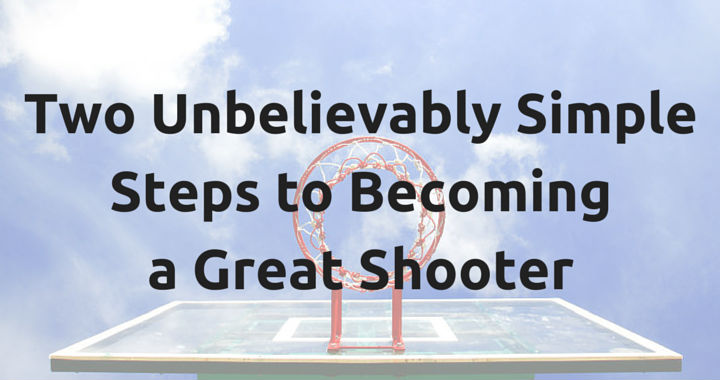 First off, let’s get this myth out of the way: There are no secrets to becoming a great shooter. It’s not mind-blowingly complex. There’s no secret that only the all-time great shooters know about. There’s not a special drill you can do every time you step into the gym that will make you a knock-down three point shooter.

In fact, becoming a great shooter isn’t very hard at all… but it is time consuming and will take a consistent commitment.

If there is a secret to becoming a great shooter, it’s this: You must be willing to put the work in. No exceptions.

I have the privilege of running a one hour shooting session with a select group of young players every week. It’s great fun, they’re great kids, but there’s one massive problem I have with nearly every single one of them the first time they show up at the first shooting session…

They think they’re going to magically turn into fantastic shooters during our one hour session each week… They definitely will not. And that’s the first thing I tell them at the very start of the first training.

Again, you don’t become a great shooter here. You learn how to shoot here.

Where you’re going to become a great shooter is in your own time. By yourself in the early mornings in an empty gym. In your backyard every day after school. You’ve got to be willing put in the time every single day and put up enough shots. You can’t expect to magically turn into a great shooter in only an hour a week. I can help you with what to do during the time you practice, but only you can make sure you’re getting enough shots up every day, every week, every month, and every year, to become a great shooter.”

If you pay close attention to that speech, you’ll find that there are only two important steps to become a great shooter. Here they are…

The first step to becoming a great shooter is to master the mechanics of the basketball shot. It’s the coaches responsibility to help the player perfect their technique.

Having great mechanics on your basketball shot is important for two main reasons;
a. A shot with good technique is much easier to improve.
b. Shooting flaws are very difficult to correct once they become an ingrained habit in the player.

There have been great shooters without great shooting mechanics… but it’s a lot harder to become great. It takes a lot more repetitions.

The second and final step is to shoot a lot (I repeat: a lot) of smart repetitions. This is where the player has to take over and become accountable for becoming a great shooter. Players can’t rely on coaches to be with them every time they’re shooting.

Notice how I deliberately include the word ‘smart’ in that sentence. If your players are at the gym chucking up three’s without much attention to what they’re doing, no matter how many repetitions that put up they’re never going to become great shooters. It takes deliberate, well thought out practice.

Steph Curry, who I consider to currently be the greatest in-game shooter on the planet, makes 500 shots per day in the summer and makes 200 to 350 shooter per day during the season. That’s not heaps.

I’m not telling players they need to get in the gym and make 1000 shots every day. What I recommend to players differs greatly depending on their goals and age. But one thing’s for sure, they must be game shots, from game spots, at game speed.

There is only so much we coaches can do. Once the mechanics of the shot are learnt it falls into the hands of the player to be accountable for developing their shot in their own time.

So here are the only two steps you need to remember…
1. Master the Mechanics – Coaches Responsibility
2. Lots of Repetitions – Players Responsibility

They’re not hard, but they do require the player to make a big commitment to getting better. It’s the price every shooter must pay to go from good to great.

Question for coaches: How many shots do you believe players that want to become great shooters should be making each day?

Let me know in the comments.