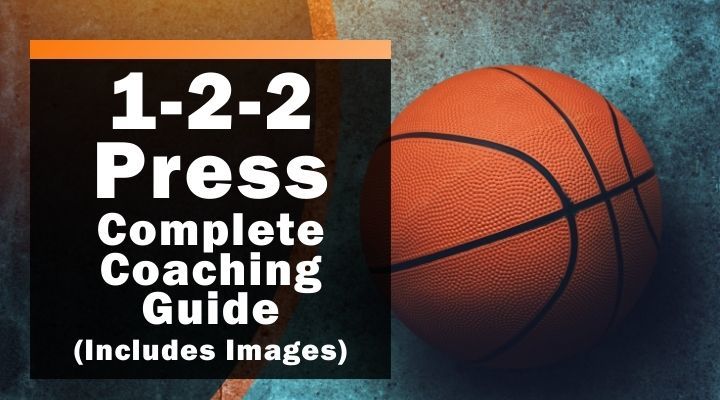 Basketball is a game of flow.

When a team is playing well, they’re usually advancing the ball quickly down the court with an attacking mindset.

It’s the job of the defense to try to break the offensive team’s rhythm.

One way to do this is through full court zone pressure, which can create indecision and force the offense to reverse the ball multiple times to cross the half court line.

There are several zone presses that can give offenses fits.

Let’s break it down.

Pressing teams typically want to either speed up or slow down the offensive team.

While the 1-2-2 can be made more aggressive, it is usually a containment press that forces multiple ball reversals and prevents the ball from moving quickly.

2. Let the Offense Make a Mistake

Just because the 1-2-2 press is not a reckless press does not mean it can’t create turnovers.

The more passes and catches the offense is forced to execute, the more opportunities they have to make a mistake.

Most middle school and high school teams are turnover-prone and will eventually make a bad pass or bobble a pass, leading to steal opportunities for the defense.

The defense gets more aggressive when the ball is on the sideline, particularly as it is dribbled.

In the 1-2-2 press, the ball is trapped in the outer third of the floor. These traps are great chances to force mistakes and come up with steals. 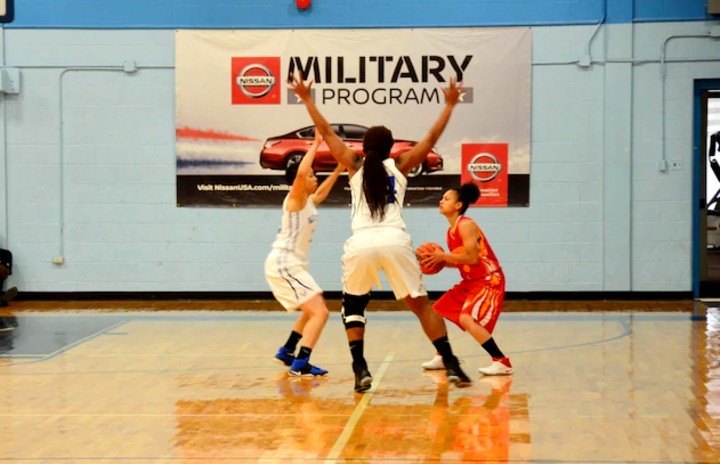 The 1-2-2 is not a press that should result in many layups allowed.

When executed correctly, someone will always be guarding the rim so the offense should have to work to score even when they break the pressure.

With that being said, the press will still force some turnovers simply by making the offense execute passes under pressure.

The low-risk, high-reward nature of the 1-2-2 press makes it very effective.

2. Breaks the Rhythm of the Opponent

As previously stated, the 1-2-2 press can make fast breaking teams indecisive and slow.

You can choose to use the press throughout the game or just in spurts to give a different look and change the flow of the game.

3. Wears Down the Opponent

It can be physically and mentally exhausting to have to face full court pressure throughout the game.

This can take a toll on the opponent, particularly their guards, and sometimes the reward of the press isn’t noticed until later in the game.

An opponent might methodically break the press early on, but in the fourth quarter, tired guards may make a few bad passes, leading to easy baskets for your team.

4. Can Drop Into Man or Zone

Because the 1-2-2 press is not usually broken at full speed, your team should have time to settle into its half court defense.

You could stay in the 1-2-2 alignment throughout the whole possession, or maybe you would prefer to shift to a 2-3 zone or to match up man to man in the half court.

With enough practice, any of these options can be very effective.

As with all full court presses, the 1-2-2 requires a great deal of effort to be utilized effectively.

Having quality depth is helpful, and this press lets you go deeper into your bench.

a. No Straight-Line Passes

No press will work if the ball can be snapped from one side of the court to the other in straight lines.

Players should play with high hands to force slow lob passes. These passes can be stolen, or will at least give the defense a longer time to recover.

b. No Passes to the Middle

The defense must prioritize keeping the ball out of the middle of the floor.

c. No Easy Catches or Dribbles Up the Sideline

Likewise, the back line of the defense must work to prevent easy passes up the sideline. It doesn’t do any good to trap the ball-handler if he or she can make a simple pass right in front of them.

d. No Passes Behind the Defense

As previously stated, this should be a low-risk press.

The back line of the defense must be sure no passes get behind them.

Because the role of rim protector shifts as the ball is reversed, failure to follow this rule can lead to an uncontested layup for the offense.

Back line defenders should communicate and must also know their own speed. A quicker player can play up higher than a slower defender.

e. No Fouling in the Trap

A team’s hard work is lost when someone reaches in to commit a silly foul.

Obviously, fouls will happen on occasion. However, players must be trained to keep high hands and take good angles when trapping a ball-handler.

This ties into the concept of letting the defense make a mistake.

It’s not the job of the defenders in the trap to try for steals.

If they aggressively trap with high hands, weak passes will be made, and rotating defenders will have a chance at steals.

The diagram below shows the typical alignment of the 1-2-2 press.

This defense is usually used in the ¾ court.

Please note that the numbers in the diagram do not necessarily have to correlate with traditional basketball positions.

Position your players where you think they will be most effective, regardless of position. 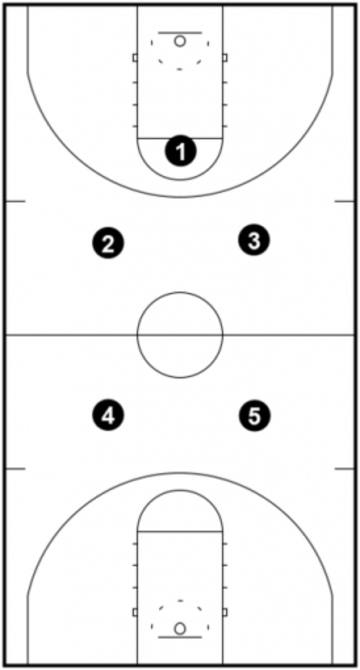 Let’s break down the responsibilities for each role. 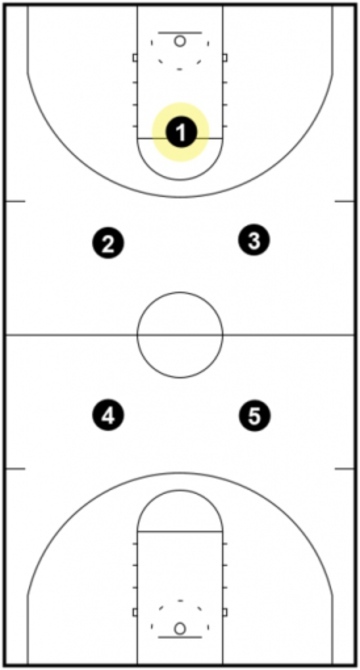 The top player should be quick and long.

Length is a huge asset in this position because the offense will likely try to break the press by passing over this defender several times.

Deflections by the top defender often lead directly to layups, so you want him or her to be extremely active.

The top player must also be deceptive and not give away exactly when they will leave to trap. This creates doubt for the offensive guards.

The top defender plays with his or her shoulders to the sideline, steering the ball-handler to the middle line defender on the ball side.

If the ball is reversed, the top defender moves to guard the new ball-handler with the same goal – make the ball go up the sideline to the middle defender. 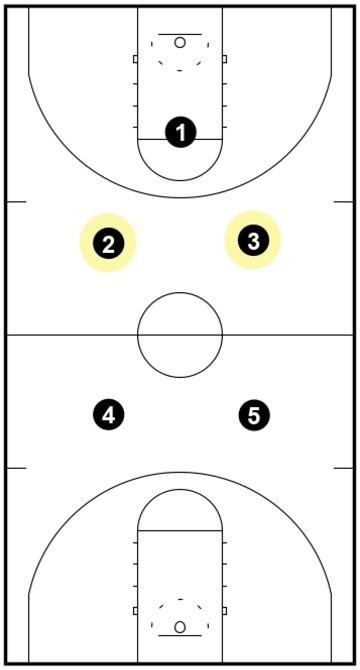 In this defense, there are two middle line defenders.

You want your middle defenders to be good anticipators, as this position will likely lead your team in steals.

The middle defenders have different jobs depending on the position of the ball.

The ball side defender should be ready to trap the ball-handler with the help of the top player. If the ball is dribbled up the sideline, those two defenders will trap aggressively.

The middle line defender on the weak side of the floor must rotate to take away the middle.

Nearly every team will flash someone to the middle to attack the press.

It is crucial that the middle line takes this pass away. 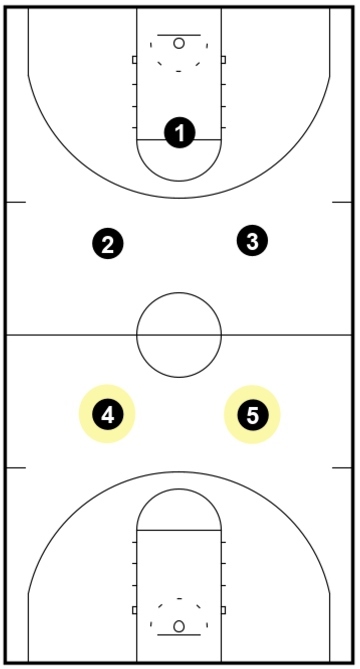 The two back line defenders will usually (but not always) be your post players.

These players should also be able to read the offensive player and anticipate the next pass.

The deep player on the ball side of the floor takes away any pass up the sideline. They should be between the ball and the sideline player to steal a potential pass.

The weak side back line player is responsible for guarding the basket.

This is where anticipation comes in.

The weak side defender should play as high as possible while still being able to take away a deep pass to the basket.

Athletic players can sneak up to entice the offense to attempt a deep pass, then sprint back to make a steal.

Slower players can be more conservative – their first job is to make sure the offense gets no easy baskets.

The 1-2-2 press will not be effective if players do not utilize proper trapping fundamentals.

Teach your players to trap with high hands and feet together.

Players must also know the correct angles while trapping.

The ball should NEVER be dribbled through a trap.

If trappers play with high hands, only slow passes will be made, giving the rotating interceptors opportunities to get steals.

When the ball is being inbounded, the middle line players (X2 and X3) must ensure a pass does not go directly to the middle of the floor.

Notice how they are pinching on Player 3 in the diagram below. 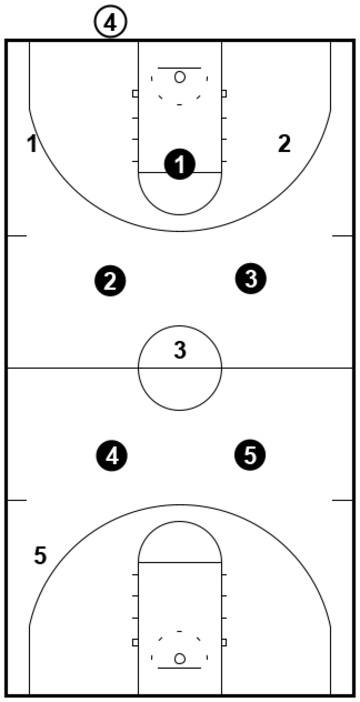 When the ball is on an outer third of the court, the defense loads up.

In the second diagram below, X1 positions himself between Player 1 and Player 4.

The goal is to force a dribble up the sideline toward X2.

X5 drops in preparation to take away the basket. 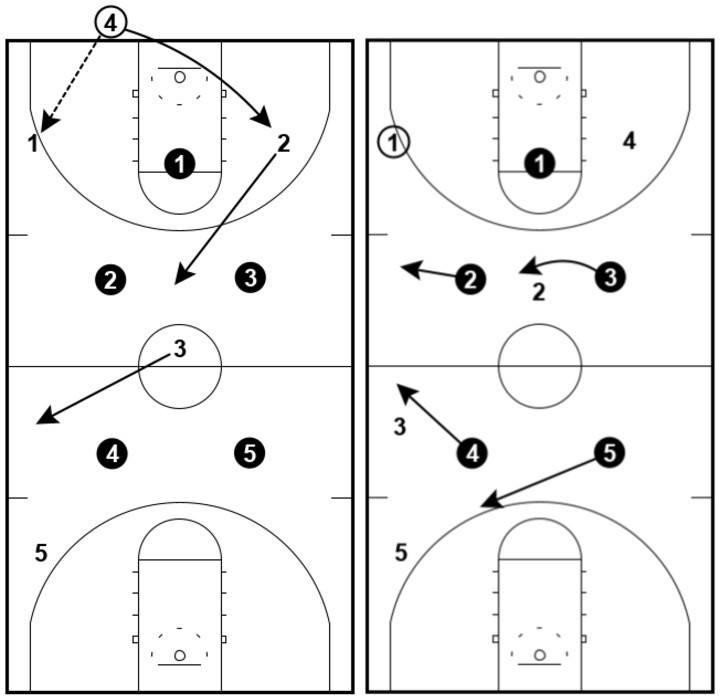 If the ball is reversed, the strong side and weak side players switch responsibilities.

Remember, X1 plays with high hands and uses his length to force a slow reversal pass.

This gives everyone else a bit more time to rotate to their new positions. 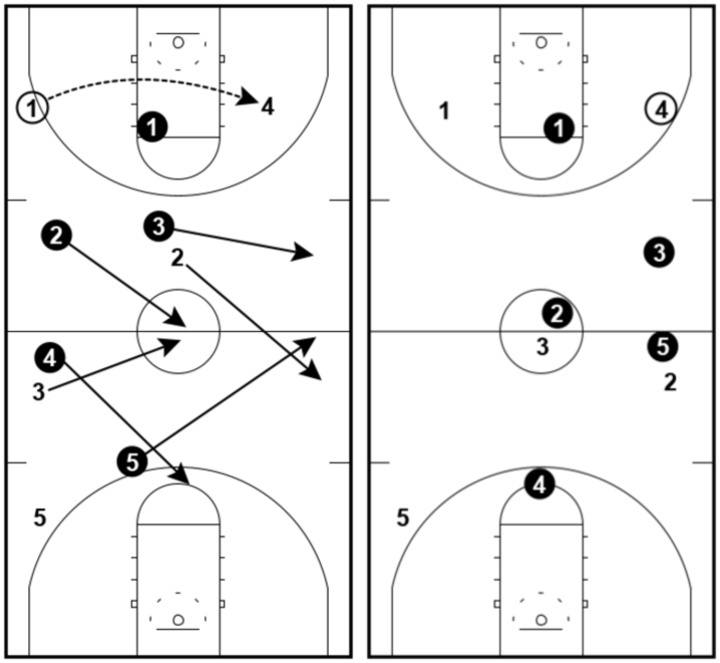 If the ball is dribbled up the sideline, the top and ball side middle players will trap.

X2 and X5 are interceptors, seeking to steal passes out of the trap.

Teach interceptors to read the eyes and shoulders of the offensive players.

Players under pressure will often give away their intended target.

While X2 initially rotates to the middle, he could sprint to steal a pass to Player 1 if that pass is easily-anticipated.

X4 has rim responsibilities in this example. 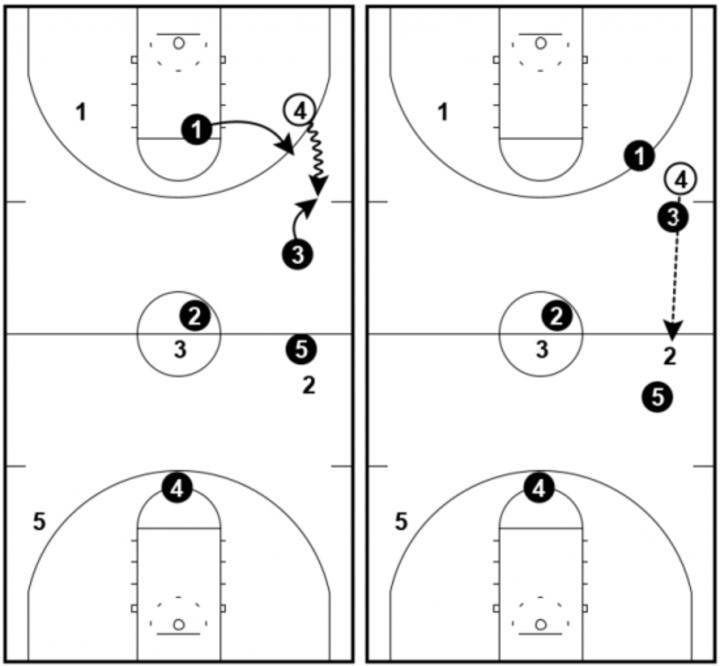 Obviously, if the offense moves the ball quickly, the defense will sometimes be late with its rotations.

In the diagram below, X5 is late taking away the sideline pass.

However, this scenario lets the defense sprint into a “vertical trap.”

It is crucial that X1 and X2 sprint in front of the ball as soon as the pass to Player 2 is attempted. 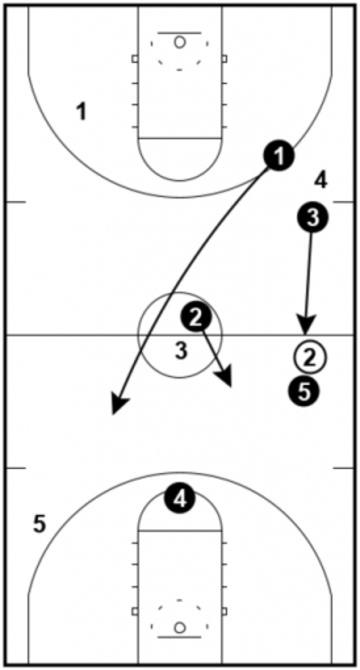 A worse situation is when the defense is slow to rotate to the middle of the floor.

In the diagrams below, X3 is unable to deny the pass to the middle.

Most of the time, the press is broken when the ball hits the middle, and the defense needs to sprint back to set-up in the half court.

In this example, X3 would take the ball and the other defenders would sprint down the floor.

Even the best presses won’t force turnovers every possession.

It is extremely important to practice transitioning from the 1-2-2 to your half court defense.

The defense you fall back into is your choice, but the players must communicate and all be on the same page. 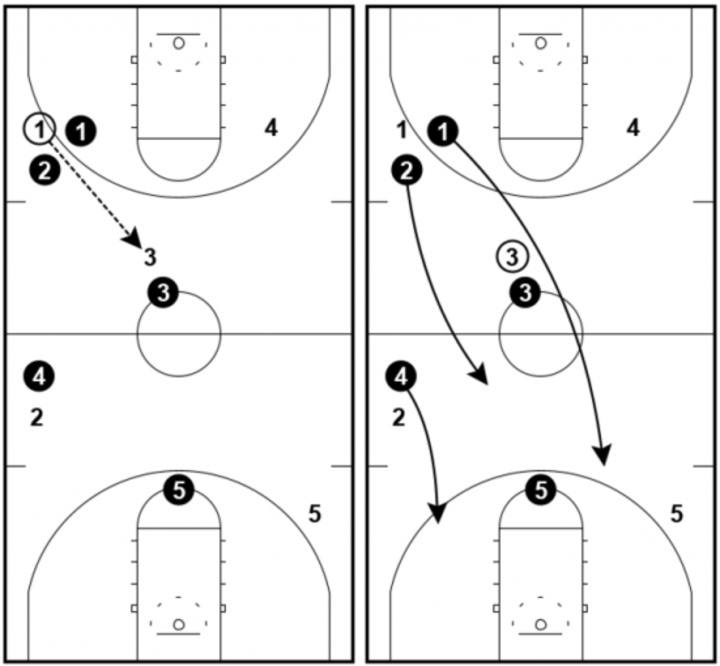 If you are looking for a way to control the tempo of the game, slow down a fast-breaking opponent, and force additional turnovers, while still protecting the basket, the 1-2-2 press may be for you.

This press is a proven way to accomplish those goals.

Whether you want to use it consistently throughout the game or just use it as a momentum-changer, give the 1-2-2 press a look!