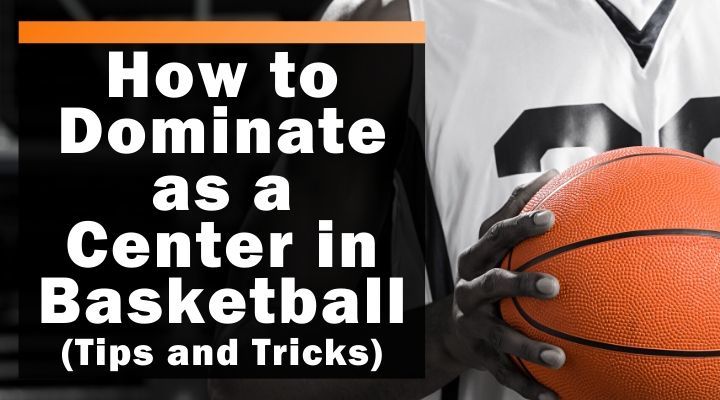 The center, who is often referred to as the “five,” is one of the most important basketball positions on the team.

A dominant center can completely change the identity of a team’s offense and defense.

Often the player deemed "the center" is the tallest player on the team, and they usually spend a lot of time around the key on the defensive end of the floor.

Offensively, most of the center’s points will come right around the basket, although it's becoming more common for them to step outside and hit midrange and three-point shots.

5 Traits of a Dominant Center

Many youth players watch the slam dunks of Shaquille O’Neal or the blocked shots of Dwight Howard and want to mimic the play of famous big men...

But few actually have the characteristics necessary to be a great center.

So, what traits does the “five” man need to dominate?

Even though we believe positionless basketball can be a great offensive concept and that multiple players should be able to play multiple positions on the court...

The saying “size matters” still exists for a reason.

This isn’t to say a smaller center can’t be effective... but it’s much more difficult.

The team's center also usually has elite strength to compliment that height.

A player who is expected to battle for every rebound, score regularly in the post, and guard the biggest player on the other team will have to be strong in order to be successful.

A lot of teams have players that are tall or strong, but it is far more rare for a player to combine those physical attributes with the willingness to use them.

A great center needs to provide an inside presence on both ends of the court, and size alone is not enough to create that presence.

They must also be willing to play physical with the biggest and strongest players on the other team on every trip down the court.

The tallest player on the team is never going to be the quickest, but a dominant center does still need to be an athletic player who can run the floor and contribute on every possession.

Mobility is a trait that often separates a good center from a great one, primarily because it is so rare among players who are naturally so much larger physically than other players on the court.

Any coach would be glad to have a player who is tall, strong, and willing to play physical...

But if that player is also athletic enough to create shots for himself on the offensive end and block shots on the defensive end, then he will be a truly dominant center.

Dominant centers are a nightmare for opposing coaches, and one way they typically try to minimize that player’s impact is by creating tempo offensively and forcing him to run the floor.

Most centers are not built for that type of game, but a dominant one will also be in good enough shape to play a lot of minutes.

After all, even if you are the best player on the court, your impact is not nearly as high as it could be if you are only able to play half of the game.

A center who is in great physical shape will also be in great shape to become a dominant player.

The Roles and Responsibilities of a Center

A player with size, strength, and athleticism has the potential to become a great center...

But how should he be putting those characteristics to use?

a. Offensive and Defensive Rebounding

If you have a player with the size and physicality to be a true center, he needs to be the best rebounder on both ends of the court.

It does not take a basketball genius to realize that the tallest player is the closest to the rim, and therefore the closest to a lot of rebounding opportunities.

A center who controls the glass can be the most valuable member of a basketball team.

So a dominant center who attacks the glass on both ends can completely dictate the game.

As the biggest player on the court, the center needs to provide a presence in the lane for the offense.

This means he must be able to fight for post position, and then be able to execute a variety of different moves to score on the block.

Depending on the level of play, it can be common for centers to be thrust into their role simply because of size, but a dominant center needs to be skilled enough to make efficient moves and finish with touch around the rim.

A great center can completely change your team’s entire defense, primarily because opponents will be much less willing to attack the hoop.

A high level high school center or above may be expected to play above the rim and block shots, but a center at any level can still be a “rim protector” if he is able to be a help defender that discourages the offense to drive.

This is where the height, strength, and physicality mentioned above become necessities for a dominant center, as a smaller player simply does not provide that physical presence.

Again, height, strength, and physicality of course play a factor in this responsibility.

Players of any size can get rebounds or score in the post occasionally, but not everyone can physically take on the challenge of defending a center.

If your center has the mobility and conditioning mentioned above as well, then he will have the advantage in this matchup.

e. Distributing When the Defense Collapses

If a player is a truly dominant center who is capable of scoring in a variety of ways, then he probably will not be guarded by only one player very often.

Some teams may elect to send double teams or traps to force the center to get rid of the ball, and when that happens, he must be able to distribute to open teammates.

A dominant center scores in the lane often enough to draw additional defenders, and then takes advantage by dumping passes off to the other post player, hitting an open cutter, or kicking out for an open 3-point shot.

5 Tips for a Center

Now that we’ve covered what characteristics can make for a great center and what role the center should be playing on the court, how can a player build himself into a great big man?

At some point, most coaches have seen a physically imposing center who provides a presence, but his only chance to score is an easy drop step layup or open putback at the rim.

However, a great center needs to have a number of different post moves that they can execute with their back to the basket.

True post players have become fewer and further between in this era of basketball.

In fact, most teams don’t play with a true center at all...

So a big, tall player who probably isn’t as quick as most others or as comfortable on the perimeter needs to have multiple ways to score inside in order to be established as part of an offense.

A dominant center should have a go-to move, a very reliable secondary move, and then also be able to add counters to those moves.

A dominant defensive center is typically a shot blocker.

But simply being tall will not automatically mean that a player will be spiking every opponent’s shot off the backboard.

Playing 1-on-1 against an offensive player on the block will help a center develop those skills, and getting a number of repetitions in a row will help build the necessary conditioning as well.

The most common way that an opposing coach will try to limit the effectiveness of a dominant center is by forcing him to score at the free throw line instead of giving up open post moves.

It has proven to be incredibly effective in some situations, especially against big men who are far below average free throw shooters.

After all, “Hack-A-Shaq” is still one of the most commonly used phrases in defensive basketball strategy many years after it was implemented.

A great center needs to be able to step up to the free throw line and knock down shots at a high rate so that he can not be taken advantage of by opposing teams.

Free throw shooting becomes even more important in late game situations, and if the center is your best player, you want to be able to leave them in the game during crunch time.

But if they can’t be trusted to make free throws, then you probably won’t want them on the court in those big moments.

4. Work on Outside Shooting

As mentioned above, the time of true centers has largely come and gone in today’s basketball world.

It has become much more common to see different varieties of “small-ball” or positionless basketball, especially at higher levels.

Therefore, a center will only make himself more valuable if he is also able to at least provide a threat to shoot a jump shot.

Long range shooting isn’t necessary for centers, and it is extremely rare for the center to be considered a knock down shooter.

But even the willingness to shoot from 10-15 feet can add an entirely different dimension that can be very difficult for most opposing centers to defend.

If a center can step out and be a threat from 3-point range, too, then he has the potential to become unstoppable.

5. Get in the Weight Room

While shooting and other ball skills can be a great addition to a center’s game, they will never be truly necessary or expected to play the position.

Strength is absolutely essential to the success of a big man who aims to control the paint.

Spend time weight training to get your body to a point where it can physically take on the responsibility and toll of playing center.

A center can be a focal point of a team offense and a team defense if they have the size and physicality to provide a real presence on both ends of the court.

However, the center can completely change the game if they also have the skills and athleticism to control the rebounding battle, score in the paint, and block shots.

Though the position has become less and less common in recent years, a truly dominant center who has the ability to impact the game as an offensive threat and also a defensive stopper will make your team a matchup nightmare for opposing coaches.