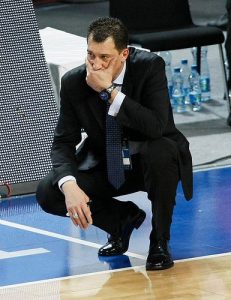 Coach Carter is one of my all time favorite movies. While older coaches will remember re-watching some of the classics like ‘Hoosiers’ and ‘Glory Road’ hundreds of times, it seems the new generation of players have taken a hold on Coach Carter and aren’t letting go. Possibly because a lot of young athletes can relate to the circumstances that the players on the Richmond Oilers team find themselves in.

But it’s not just the players that can benefit from watching it, there are many lessons that we coaches can also learn from Coach Carter.

Below I’ve listed 7 lessons that really hit home with me while recently watching it.

7 Lessons to Learn from Coach Carter

1. Players should always arrive to practice on time

Unless they have a valid excuse, all players must arrive on time to practice.

Arriving on time displays a respect for your teammates and the coach. It also ensures that practice is kept on a tight schedule according to your practice plan (I know none of you go to practice without a plan… right?).

2. Show your players respect, and they will show it back

“Sir is a term of respect. And you will have my respect, until you abuse it”.

In the opening meetings with his players the first thing Coach Carter does is call one of the players ‘sir’. While initially it’s evident they feel uneasy about it, they quickly come to realise the importance of showing respect.

I’m not advocating you refer to all of your players as ’sir’, and I don’t believe they should call you it either, but I do want to bring to your attention the importance of respect between players and the coach.

3. Athletes need to be well conditioned

“I cannot teach you the game of basketball until your conditioning is at a level the allows me to do so. Gentleman, report to the baseline”.

Ahh the famous Coach Carter quote… “Gentleman, report to the baseline”. Love it!

Basketball is an aerobic sport, which means the players are going to run… a lot.

If your players aren’t conditioned to play a full game of basketball, what do you think will happen towards the end of the final quarter? Your players will start to make mental errors that will often contribute to a loss. Maybe they’ll miss a defensive rotation, or a couple of late game free throws.

The importance of education is one of the main topics in this movie. Coach Carter went as far as to ‘lockdown’ the gym because his students/players weren’t reaching the educational standards that they set at the start of the season.

Coach Carter understands that the likelyhood of any of his players going on to have a career as a professional basketball player is very slim. For that reason, he forces them to focus on their education to improve their quality of lives in the future.

5. The little stats really do matter

Contrary to what some coaches, players, and parents seem to believe, points don’t tell the whole story. The ‘little’ statistics often tell a lot more about the game than the amount of points scored per player does.

“I’ll do push ups for him. You said we’re a team. One struggles we all struggle. One player triumph’s we all triumph, right?”

After asking to rejoin the Richmond basketball team, Timo Cruze is given the near impossible task of 1,000 suicides and 2,500 pushups. When he fails to reach required number within the time given, his teammates step in to help him complete them so he can get back on the team.

Great teams have players that can count on each other.

“Oh well, now, not quite your story book ending hah? Not for us anyway. But you men played like champions, you never gave up, and champions hold their heads high. What you achieved goes way beyond the win loss column or whats gonna be written on the front pages of the sport’s section tomorrow. You’ve achieved something that some people have spent their whole lives trying to find, what you achieved is that ever elusive victory with-in, and gentlemen I am so proud of you”.

Coach Carter recognises that there are more important things in life than winning basketball games. After losing their final game, Carter lets his players know how proud he is of them despite their loss.

Have you watched Coach Carter?

If you haven’t seen it, make sure you do. There are tons of lessons coaches can learn by watching movis like Coach Carter. Way more than I can talk about in a single blog post.

The ones I’ve discussed above are the lessons that had the biggest impact on me. Share the lessons you’ve learnt watching Coach Carter in the comments. I’m sure there are many that I’ve missed!