The 5 Moments Throughout a Game You Must Call a Timeout 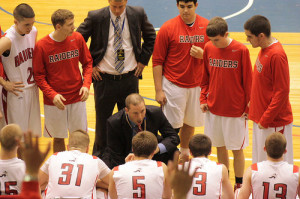 Timeouts are a crucial part of a basketball game and can be the difference between going home with a win or a loss. Yes… they’re that important.

Every coach must learn at what stage of the game their timeouts will have the best impact on your teams success.

I received an e-mail a couple of days ago requesting advice on when the best times are throughout a game to call a timeout. Obviously, this differ from game to game, but there some hard-and-fast rules that every coach seem’s to stick by that I want to share with you.

Here are five times throughout a game when you should call a timeout.

The 5 Moments You Must Call A Timeout

1. To stop the momentum of the other team (and the crowd)

Just as your team will undoubtedly get hot during certain stretches games, there will be times when the opposition also goes on a run where they seem to make every shot they attempt. Once this starts to happen, their players build on their confidence and your players will start to doubt themselves. If nothing is changed this can quickly turn into a disaster and the next time you look up at the scoreboard the opposition has put on a quick 10 points. Which will possibly be the difference in the game.

Having said that, you should always call a timeout in this situation. Especially if you’re playing on the road. It calm’s down the crowd, re-focuses your players, and cools down the opposition players.

It’s all about momentum. You don’t want to let the other team get their confidence up.

2. To change your game strategy

Another reason to call a timeout is when you want to make a big change in your strategy.

For example, if you’re in a zone-press and it’s just not working and you want to bring your players back into a man-to-man defense. Or you’re getting killed in the post and need to explain to your players who you want to double the post.

Sometimes it can be hard to call out the changes that you want to be made, especially with younger players. You need to call a timeout so that you can talk to them and explain the changes without distractions.

3. To draw up a specific play

This is most often used towards the end of a game. Ever wondered why the last 3 minutes of a basketball game seem to go for 10 minutes? Timeouts are the reason. In a close game that goes down to the wire it’s not uncommon to see 3 or 4 timeouts called in the last couple of minutes.

Down the stretch is when a coach can start to be the crucial difference in a game. Calling a timeout gives you the opportunity to diagram a new play to give you an open look. Whereas if you didn’t call a timeout, your players may be forced to run a play that the other team may have learned how to defend during the game and your players may not get an open look.

4. To give your players a rest without substituting

3 minutes to go, the scores are tied, but unfortunately, your best player is running out of gas. Do you really want to sub them out of the game for a chance to rest? I doubt it.

That’s where timeouts come in handy. They allow you to give your players a break without being forced to substitute them out of the game.

I was on the ledge as to whether to include this one as some might think ‘to fire up your team’ also falls under the ‘momentum’ point. But I don’t think it does.

We’ve all coached games where our players start off the game sluggish and seem mentally out of it regardless of what the score is.

This is a time you should call a timeout to give them a good ol’ kick up the backside to get them focused on the game at hand.

I know we all have different opinions… are there any other stages of the game you think coaches must call a timeout?