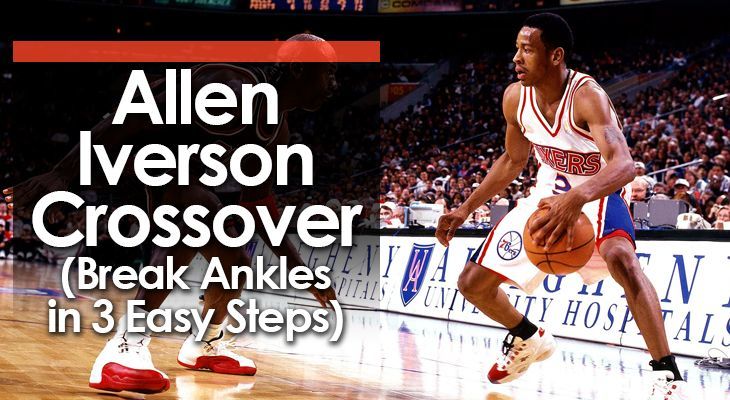 There are few moves in basketball more effective for blowing by your defender than the “Allen Iverson Crossover”.

It looks like an incredibly simple move at surface level, but it works at any level of competition.

Anyone can execute the basic variation of the move, but there’s only one king when it comes to crossovers, and his name is Allen Iverson.

In this blog post I’ll break down the Allen Iverson crossover and give you a step-by-step guide on how to execute it yourself.

Since the basic concept of the crossover should be familiar to any coach or player, I’ll focus on the details that made Iverson’s moves so deadly and effective against top NBA competition.

Why The Allen Iverson Crossover Is Effective

Before I get into the step-by-step guide, let’s take a second to talk about the things that helped Iverson to be as effective as he was.

He knew that he’d have to rely on skill and quickness to make it as a player.

The crossover was his most famous move, but his bag of dribbling tricks was deep and he could use a variety of moves to get by his defender.

Sure, the threat of a crossover was always there…

However, if the defender played like he was anticipating it, Iverson would just pull a different move and blow by him in an instant.

The second thing to mention is Iverson’s explosiveness.

No matter how skilled you may be, speed and explosiveness still matter.

Don’t think of either as an unbeatable obstacle.

Now, let’s explore how Iverson did it in his day.

The “Allen Iverson Crossover” was almost never his primary move.

Many players make the mistake of going into a 1-on-1 with the intent to cross their opponent.

The crossover is a counter move for when the defender commits to one direction, and that’s exactly how Allen Iverson treated it.

His first option was always to just blow by the defender.

This was his go-to move when facing poor or slow defenders.

However, smart and quick defenders require a more elaborate setup to attack.

This is where Iverson would slow it down and size up the defender with a couple of jabs, hesitation dribbles, or “fake” crossovers.

The moves change every time to avoid becoming predictable.

These setup moves are not meant to get you past the defender.

They serve to get the defender off balance and prepare them for your actual move.

He would do this by dropping the foot and shoulder on the side where he wanted to attack.

This gave the defender all the signals that he was beginning to explode in that direction.

One more important piece of this initial attack are the eyes.

If you’re not looking where you want to drive, your opponent won’t bite nearly as hard. Keep your eyes locked in that direction until you start to change direction.

Practicing this setup is arguably the most important part of preparing for the cross.

If you don’t give a great fake in that direction, you can’t expect your opponent to commit. 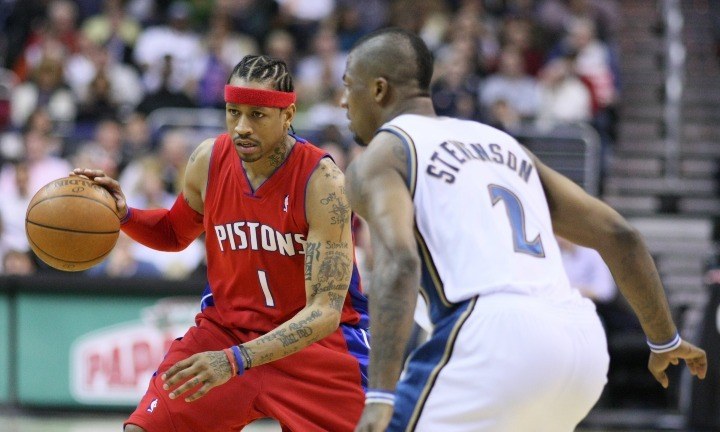 Iverson preferred to cross left to right whenever possible, likely because he felt more comfortable and quicker exploding from his left leg.

Many right-handed players prefer this and you’ll probably feel comfortable doing it as well.

The Allen Iverson Crossover is all about two things:

Ideally, you want to catch your opponent in the middle of their commitment to the direction you faked towards before they regain balance.

Iverson was a magician at doing this, and that’s exactly why he managed to break so many ankles with his moves.

His crossover dribble was low and quick.

This minimized the chance of an opponent managing to swipe the ball mid-move.

As the ball would start to move from one side to the other, Iverson would also bring his opposite foot forward to begin his move in the opposite direction.

For a left-right crossover, his left foot would come forward on the initial drive and he would bring the right foot forward when he started the crossover dribble.

His stance would remain low throughout the move to ensure he can explode in either direction without delay.

Even after Iverson successfully changed direction and got a half-step advantage over the defender, his work wasn’t done.

You haven’t really passed a defender until your hips are in front of theirs.

Remember that your entire body should move as one towards the direction of your crossover.

If you move your body only after the foot is already brought forward, you’ll destroy any advantage you got with the crossover.

You’ll just bail the defender out and give them time to recover.

If you got your hips in front of theirs, it’s game over 99% of the time.

Once you’ve completed the Allen Iverson crossover, position yourself between the defender and the basket to take away any chance of a recovery.

This will result in either an open layup or a foul.

Either way, the defense will be in trouble.

The Allen Iverson crossover is an extremely effective move at any level of competition.

The sooner a player learns it, the more time they’ll have to work on the details.

Keep in mind that it’s the little things mentioned throughout the article that will make or break your crossover.

Sure, you can get away with a sloppy crossover in youth leagues...

But more advanced defenders in high-school or college will completely contain you if you don’t keep getting better at the little things.

If you’re a coach, have your players start expanding their dribble repertoire as soon as you can and make sure that the crossover is a part of it.

Once your players get good at the little things, any defense you come up against will be in for a long game.