How to Throw a Baseball Pass in Basketball (5-Step Guide) 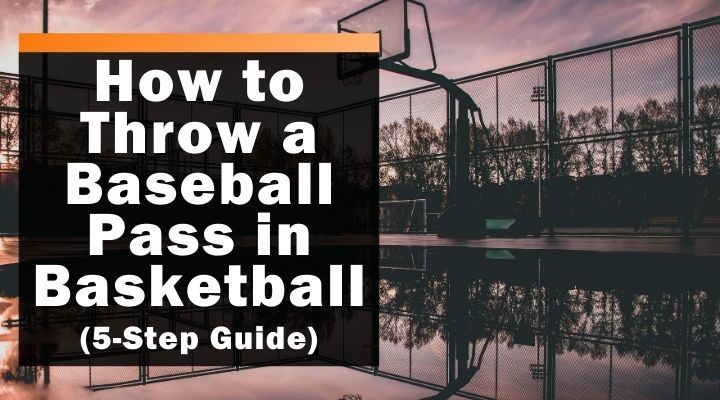 While breaking down passing form may not be the most “fun” part of basketball, a great passing team is almost always a good team to play on and to coach.

(The San Antonio Spurs, for example)

There are many types of basketball passes.

While the chest pass and bounce pass have been the traditional cornerstone passes, one-handed hook and pocket passes have popularized lately due to the frequency of the pick and roll in the modern game.

However, one important pass that is often forgotten is the baseball pass.

While not frequently used, having the baseball pass in your team’s fundamental toolbox can give you an advantage in several important situations.

Why the Baseball Pass Is Needed

The baseball pass is an excellent option when players need to pass the ball deep down the floor.

Most players (particularly young players) do not possess the strength to throw chest or overhead passes the length of the floor.

The baseball pass generates more force and allows you to threaten the defense with a pass over top and an open layup.

How to Throw a Baseball Pass in 5 Steps

Just as a quarterback points his non-throwing shoulder to the target, basketball players ready to make a strong baseball pass should align in a similar stance.

Start with both hands on the ball.

This protects the ball longer and gives the passer the option of pulling the pass back if the defense quickly takes away the pass receiver.

2. Spread Your Strong Hand on the Ball

A baseball pass is thrown with one hand.

One-handed passes can sometimes lack the control of their two-handed counterparts, so be sure to spread your hand on the ball to maximize control.

3. Bring the Ball to Your Ear

The ball should go to your back ear.

When making a right-handed baseball pass, the ball should be thrown off your right ear / shoulder.

4. Step Into the Pass

Like with most passes, it’s important to step into the pass.

Rotate your hips and step with your back foot.

On a right-handed pass, you will step with your right foot.

As you release the ball, snap your wrist to create backspin.

This will make the pass easier for your receiver to catch.

Scenarios to Use a Baseball Pass

There are several scenarios where baseball passes could be useful.

Most of the time, the player using this pass will be the inbound passer.

Teach your inbounder to always grab the ball in quarterback position.

While a baseball pass won’t be used often, by defaulting to this position, you always give yourself a possibility to challenge the defense deep when it makes a mistake.

The following are several opportunities to look for baseball passes in game situations:

a. Against Full Court Pressure

Some pressing defenses bring all five defenders above the half court line.

They will DARE the offense to try to beat them deep.

For example, some coaches will use a 2-2-1 press with the back defender coming near the half court line to help jam the middle.

If you don’t challenge the defense deep, it will be very difficult to attack this kind of press.

If you can beat the defense over the top a time or two, they will be forced to soften up.

b. Against Slow Transition Defense

One of the most deflating plays in basketball is when your team works hard for a basket but that score is followed by the opponent immediately flying down the floor for a quick layup before your defense can get set.

Smart inbound passers will seek to catch the other team sleeping after a made basket.

If a teammate sprints the floor hard, the inbounder can occasionally use a baseball pass to answer the opponent’s basket with one for your team.

There could be several late-clock situations over the course of a season where a deep baseball pass is necessary to help your team create a quality shot.

Down a point with 2 seconds left and the ball on the baseline.

In this desperate situation, you will likely want to throw the ball deep to give your team a reasonable chance at a makeable shot attempt.

It’s important to know that not anyone can make a quality baseball pass in this scenario.

Build situations in practice where you try different players in this role.

You might be surprised who your best deep passers are.

By practicing some late game situations, your team will also feel more confident if these scenarios arise over the course of your season.

Players thrive when they are given multiple tools to add to their game.

The baseball pass can be a great addition to a player’s skill set.

The small amount of practice time you dedicate to this skill could let your players move the ball down the floor more accurately and efficiently, and could pay off at the end of a close game.