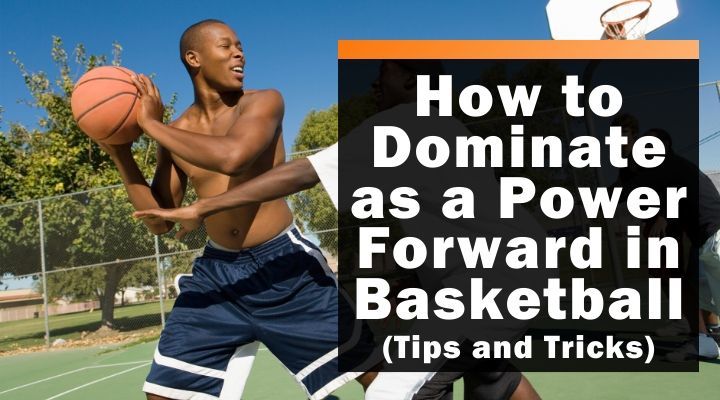 The power forward (also known as the “four”) is an integral part of any basketball team that intends to play with toughness and physicality.

Traditionally, the power forward is a player who is bigger and stronger than the point guard, shooting guard, and small forward, but a bit shorter and quicker than the center.

The power forward is primarily considered an interior player that scores in the post.

But depending on the offense, they will most likely also have to be comfortable on the perimeter in order to be considered dominant.

5 Traits of a Dominant Power Forward

A great power forward will be asked to do a number of things on both ends of the court.

But many of those are things that not all players can do.

So, what characteristics can make for a dominant power forward in particular?

Although we support positionless basketball and it’s important for players to be comfortable in multiple spots on the court, size does still matter.

The ideal power forward is big enough to create shots for himself in the post and also to defend the other team’s biggest players.

Although size often becomes a bigger separator as players grow older, this still applies to youth basketball as well, where there may not be a true “center.”

The power forward may very well be the biggest player on a youth team.

While a player has to have some natural size to be qualified as a power forward, he must combine that size with strength in order to be considered dominant.

A dominant power forward is probably the strongest player on the team, and also has to be the most willing to use that strength.

A player who is asked to be one of the team’s best rebounders and defenders while being matched up against the opponent’s biggest players will have to be strong in order to be successful.

Toughness may be the most important trait of a great power forward.

Size and strength are very necessary physical characteristics, but alone they are not enough to make the player a truly dominant force.

Great power forwards are usually the toughest and nastiest guys on the team.

Willing to defend the strongest player on the court, dive on the floor for loose balls, and fight for rebounding position every time a shot goes up.

Perimeter players (and sometimes even centers) can get away with avoiding contact and playing with more finesse if they’re good enough.

But it’s very rare for a power forward to be considered great if they are not willing to play with physicality.

While it’s true that a great power forward is most likely a big, strong player who physically imposes his will, he will not be a truly dominant player if he or she is just a one-dimensional brute.

The best power forwards are the players who can provide the strength and toughness mentioned above with the skill to step out and be serviceable on the perimeter as well.

Especially if the power forward is playing within a 4-out 1-in offense, the center may be the player who primarily occupies the block.

This means that the power forward must be able to handle the ball on the perimeter if necessary, and more importantly, to step out and knock down a midrange shot or 3-pointer.

Versatility should especially be stressed at the youth levels where players are not done growing or developing.

The player who meets the physical traits of a power forward for an elementary school team could become the point guard or the center in the future.

The power forward is not the team’s primary ball handler and is typically not a team’s primary scorer, but he will be asked to rebound, screen, defend, and play with toughness at all times.

Any player who is asked to do the most difficult jobs on the court without being regularly rewarded with points has to be a true team player.

Though in some ways this is true at all positions, the selfish player who only wants to be the leading scorer and have the ball at all times will not be a great power forward for any team. 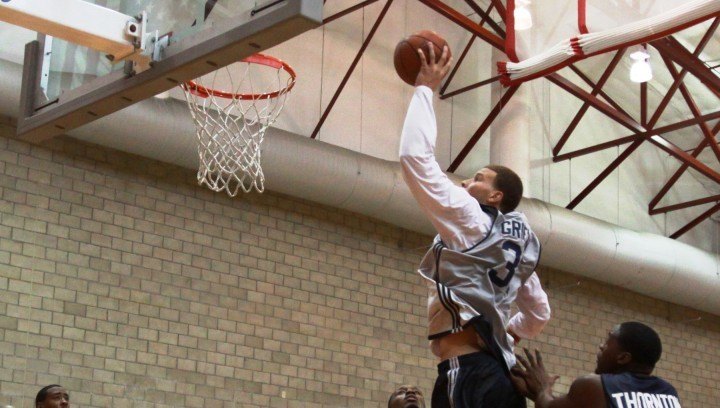 The power forward is expected to be a big, strong, tough player who can also play with skill.

But how should they use those traits, exactly?

Even though the power forward is a physical player who is not afraid of contact, this does not mean that he is simply a big body or an enforcer.

Here are a few specific responsibilities of a power forward:

a. Rebound on Both Ends of the Court

The power forward’s most important responsibility is as a rebounder.

Therefore, as one of the strongest and toughest players on the team, the power forward has to be a great rebounder on both ends of the court.

When a shot goes up on the defensive end, he must be willing to work for a box out against one of the biggest players on the other team, and he must be able to secure rebounds.

When a teammate takes a shot on the offensive end, the power forward must fight for an offensive rebound to create second chance points as well.

The power forward will most likely be the team’s leading rebounder - or second, if the team has a great rebounding center as well.

b. Defend the Biggest, Strongest Opponents

Of course, this is not always an easy task.

This is where size, toughness, and strength become absolutely necessary.

A player who lacks even one of those traits can find himself getting scored against in the low post or getting beat for offensive rebounds.

Although the power forward is often thought of as a rebounder and defender more than as a  primary scorer, to be a dominant player at any position, you must still be an offensive threat.

The power forward has to be an inside presence that is capable of scoring in the low post.

This means a great power forward must have multiple ways to score with his back to the basket, including one “go-to” post move.

It is important to be serviceable on the perimeter as well, but “power” is included in the position’s title for a reason, and being a truly dominant power forward on the offensive end starts with strong, physical moves in the paint.

d. Extend the Defense as a Capable Shooter

The difference between a power forward who is “just” a strong, physical brute and a truly dominant power forward is oftentimes the ability to contribute from the perimeter.

Depending on the age and skill level, power forwards who are able to only play “bully-ball” may sometimes be very difficult to stop...

But as both the age and skill level go up, a power forward will have to be capable of more in order to dominate.

Again, we promote the concept of positionless basketball because a team-oriented offense with versatile players is much harder to stop than one that is centered around just one or two players.

A power forward who can step out and make an open midrange or three-point jump shot gives your team a much better chance to play offense with that philosophy.

Unless the power forward happens to be the best player on the team, they’re probably not expected to be the primary scorer.

As a big, strong, tough player, you have to depend on the power forward to set physical screens that create opportunities for teammates to score.

Of course, all players are expected to screen...

But it needs to be a strength in order for a player to be considered a dominant power forward.

As one of the toughest on the team, it’s the power forward’s responsibility to make hustle plays.

Of course, as a coach, you want all of your players to be responsible for bringing energy and making tough plays like these...

However, a great power forward who is the toughest player on the team is responsible for initiating that energy. 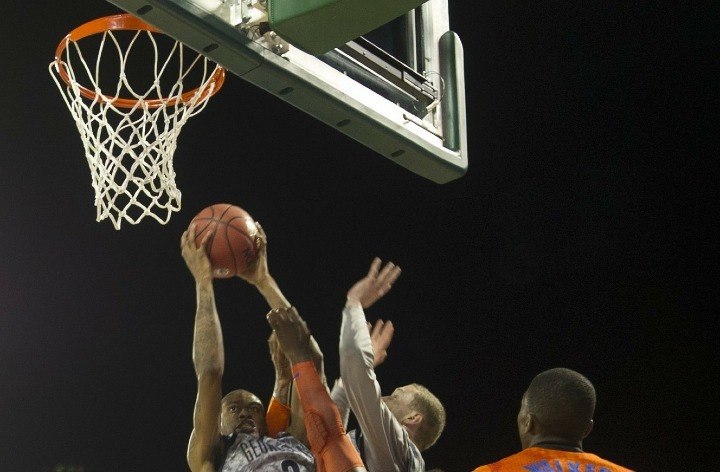 4 Tips for a Power Forward

Now that we know what traits make for a strong power forward and what that power forward should be responsible for on the court, let’s talk about what a player can do to improve in those areas.

The power forward is not always considered a team’s primary offensive threat, but they must still be able to score in the low post when given the opportunity.

Players that have a number of reliable back-to-the-basket post moves have become more rare in today’s game, and so have truly dominant power forwards.

This is not a coincidence.

In order to be a truly dominant power forward on the offensive end of the court, you must have at least one “go-to” move in the post, and other options you are comfortable using as well.

As mentioned earlier, the power forward’s most important role on the team is as a rebounder.

While a number of the traits that make a great rebounder (size, instinct, toughness, etc) are somewhat natural, they can be worked on as well.

Live drills with real shot attempts will teach a player to react to rebounding angles and also will force them to become more comfortable with initiating contact.

3. Get in Great Shape

In order to make hustle plays, defend the other team’s strongest players, and bring energy to the court, you must be in great shape.

A dominant power forward is expected to provide a variety of threats on the offensive end, to bring toughness and grit to the defensive end, and to give effort for rebounds on both ends.

Doing all of those things for a full game at any level requires great conditioning.

As strength is a necessary trait of a dominant power forward, weight lifting must also be coupled with this conditioning.

A player’s physical conditioning and strength are often built in the off-season, but must be maintained during the season as well.

As mentioned above, no power forward will be considered truly dominant if he is only a physical presence who can push people around.

It helps, of course, but the great ones are the players who also have the skill to play on the perimeter when necessary.

Any player who can add serviceable ball handling and shooting will be a much more threatening power forward, and they will also be more capable of playing positionless basketball.

Focusing on solely post moves to score in the paint or solely on weight lifting to improve strength can limit versatility for a power forward.

While both are certainly necessary, you must work on ball handling and shooting to compliment those post moves, and also improve agility and athleticism to compliment brute strength.

A power forward can be an integral part of your team if he has things like size, strength, and toughness.

Traits that every coach wants all of their players to have.

However, a power forward can be dominant if he couples those traits with great physical conditioning, the willingness to make selfless plays, and the versatility to both defend and rebound and also score from multiple spots on the court.

The player who provides that rare combination to become a dominant power forward can bring that same toughness and energy out of his teammates, and ultimately can be the driving force behind your team’s overall identity.