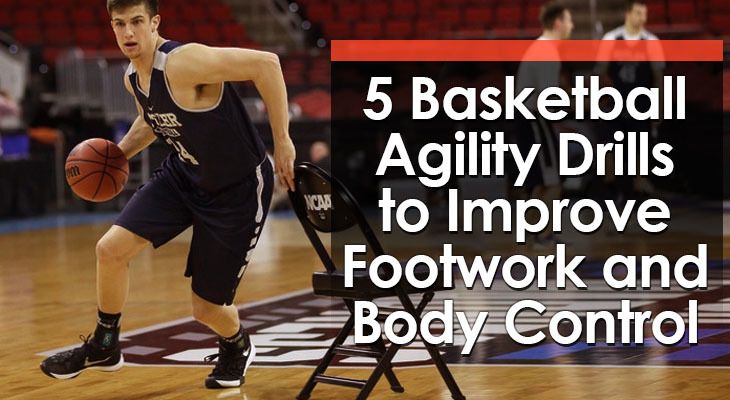 Agility is the ability for a player to move quickly and easily around the court, changing directions effortlessly and using elite body control to change speeds.

Agile players have an advantage because they can quickly react to opponents and be the first players to get their hands on a loose ball.

To train this, many coaches will use basketball agility drills before and during the season.

These drills are designed to improve body control, footwork, coordination, and balance.

Obviously you shouldn’t dedicate too much time to agility drills at practice, so it’s important that players work on these in their own time if they want to improve.

Here are the basketball agility drills I recommend.

Players sprint or dribble in a figure 8 pattern around cones while being timed.

The “Figure 8 Drill” is designed to work on acceleration, deceleration, and turning. The timing aspect of the drill also challenges the player to improve speed and change direction quickly.

Place the two cones about 10-15 feet apart, anywhere on the court.

Players perform a variety of jumps over a line on the ground, repeating steps as quickly as possible over a set period of time.

Line drills promote staying light on your feet, quick footwork, and put focus on controlling your body to execute the correct pattern.

One of the main strengths of basketball agility drills like the “Line Drills” is that they don’t require much setup. An individual player can do line drills anywhere.

All you need is a few square feet of space with a line on the ground, or a piece of tape that can serve as that line.

There are a number of different variations, but the basic idea for all of them is the same:

Start on one side of the line, then jump to the other side, and jump back… repeating this pattern as many times as possible in a set amount of time.

The possibilities are almost endless when it comes to Line Drills, but the basics include:

Speed ladder drills are some of the most widely used basketball agility drills.

The speed ladder lays on the ground and players perform a wide variety of footwork exercises that require them to execute a specific pattern of steps or jumps to go from one end of the ladder to the other.

But if you don’t have one, you can also use tape to make a ladder shape on the floor.

A coach or partner with a timer is helpful, but players can also do ladder drills by themselves.

The basic idea for ladder drills is simple:

Because there are so many variations, I’ll put a video below with many you can do:

Jumping rope is a common exercise that everyone remembers from elementary school gym class... but it is also a very useful drill with an endless amount of variations that can help basketball players improve footwork and coordination.

Jump rope exercises will improve a player’s hand-foot coordination, balance, and rhythm, and are an opportunity for players to work on being light on their feet.

All you need is a jump rope and a little bit of space.

Everybody knows the basic two-foot method of jumping rope, but there are endless variations that will help improve a basketball player’s footwork.

Regardless of which exercise you choose, the key is to set a goal so that you can focus on ongoing improvement over time.

Choose a specific variation and either count how many jumps you can get in a certain amount of time, or time how long it takes you to perform a set amount of jumps.

This will promote the idea of staying as light and quick on your feet as possible, which is essential on the basketball court.

Here are a few to choose from:

Players must combine skills and show footwork to excel at Foot-Ups, and hand-eye coordination to catch and pass a tennis ball at the same time.

Agility in basketball often requires players to make a play with both their feet and their hands at the same time… such as when a guard uses quick footwork to beat the man guarding him while also keeping his dribble away from help defenders.

This drill forces you to work on both of those things at the same time, which is a skill that only the most agile players will excel at.

To do this drill, you’ll need:

The player performing the drill starts with the ball on the ground at his feet. The coach or partner who is helping should be facing him about 8-10 feet away, and holding the tennis ball.

The player must do step-ups on the basketball, alternating steps and touching his feet on the top of the ball while keeping it in place on the court.

As the player is doing step-ups, the coach will then underhand toss the tennis ball at the player, who must catch it with one hand, and then toss it back.

Do this in sets of 30 seconds to a minute.