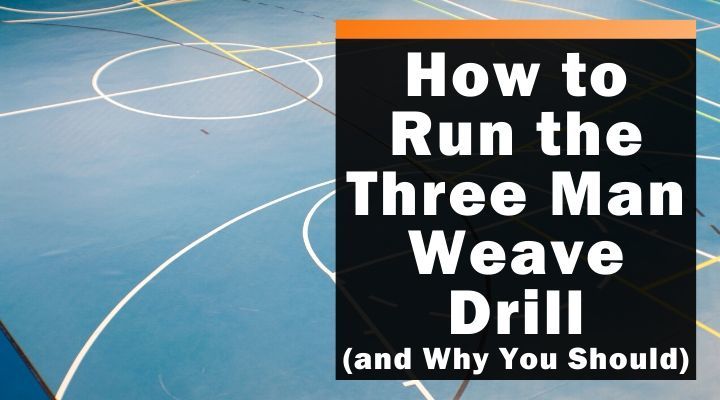 Practice time is precious to a coach, regardless of age level.

No matter if you’re coaching your child’s elementary school team or preparing for the NBA Finals, every team needs some warm up activity at the beginning of practice to get blood flowing both physically and mentally.

One of the most popular warm up drills for basketball teams is the "Three Man Weave".

This drill works on passing and catching on the fast break, communication, finishing, and running the floor hard.

While it may not mimic the action of a live game, the three man weave is still a useful drill to get your players engaged at the beginning of practice, and also to reinforce basic fundamentals that every coach wants their players to use in a game.

What You Need to Run It:

The three man weave is a great warmup drill to run with an entire team because it can be performed in groups, but could also be used in a group as small as three.

Only one group will perform the three man weave at a time, so an entire team could do the drill with just one ball. However, it is recommended to use a second ball in order to make the transitions between groups quicker.

The 3-man weave is a drill that will require finishing at a basket on both ends of the floor.

How to Set Up the Three Man Weave:

Separate your team into 3 even lines across the baseline.

One line should form in the middle of the baseline directly underneath the basket, and the other 2 lines should form in equal distances on either side of that middle line.

The player in the front of the middle line needs a basketball, and so does the second player in that same line.

The first player in each line is the first group that will perform the drill.

All other players are “out” to start the drill, but will quickly be rotated in.

How to Run the Three Man Weave

The first player in the middle line can make a chest pass to either outside line to begin the drill, and then must sprint behind the player they passed to.

The player who caught the first pass must then make another chest pass to the third player and sprint behind him.

The group moves up the court with each pass, and this pattern repeats until the final bounce pass to the scorer, who must make a layup.

After making the layup, the same group runs the same drill back to the original baseline, finishing with another layup

Once the group has weaved down and back, they fill in the end of each line, and the second group is “in.”

The three man weave should be a continuous drill.

Once the second layup is made, the next group should be starting to weave down the court.

Set a goal like “X makes in X minutes” or “less than X dropped passes” to keep everyone engaged and working together.

We’ve established how to run the three man weave, but why should your team be spending valuable practice time on it?

Simple fundamentals like passing and catching the basketball are often overlooked, and the three man weave will give your players a number of repetitions to work on both.

A drill that emphasizes making good passes, catching every pass with both hands, and finishing open layups can serve as a good reminder when used as a warm up at the beginning of practice.

b. Forces Players to Communicate

The younger your team, the worse your players probably are at communicating with one another on the court.

The three man weave is an easy way to force your players to work on that communication by making them call out the name of the player they are passing to on every single pass.

c. Gets Everybody Moving

The primary objective of the three man weave is to get your entire team warmed up, both mentally and physically.

This drill will get all of your players sprinting up and down the court, working together to reach a goal, and it gets everybody involved in a short amount of time.

Arguments Against the Three Man Weave

The three man weave is a good drill to use as a warm up, but it shouldn’t be a cornerstone of your practices or something your team spends a ton of time doing.

The primary argument against using the three man weave is that the passing and cutting behind involved in the drill does not resemble game-like situations.

I wouldn’t argue with anyone who made this case.

The reality is that wide open chest passes to wide open players are few and far between within the action of a real game, as are wide open layups.

And your team will never weave up the court during a real fast break.

Ultimately, live action drills will go much further to improving your players’ individual fundamentals, and also your team’s transition game.

Which is why I recommend thinking of the three man weave as a “warm up the body” drill.

Even though the three man weave is not an action your players will use during a real game, it is still a great warm up drill that has been popular among coaches for decades.

It may not develop your players into great passers or finishers on its own, but it still warms up the muscles necessary to work on those skills, and also gets your team communicating and working together towards a goal.

When used correctly, the three man weave is a quick and easy way to get your entire team warmed up and ready to practice at full speed.