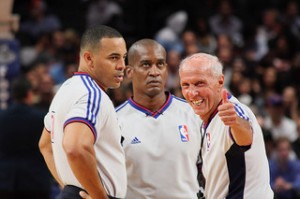 Last weekend there was a basketball tournament in town. I had no teams participating and had no other commitments, so I thought I’d head down and check it out…

While it was great watching the youngsters playing, some of the coaches absolutely disgusted me. They we’re yelling at these young referees all game, nearly every game there was a coach receiving a technical foul. Hell, there were even a couple of ejections.It was terrible to say the least.

As the tournament pointed out to me, sometimes coaches find it incredibly difficult to know how to handle referees.

Referees aren’t perfect. Just like you and I aren’t either.

Just because they make an incorrect call doesn’t mean they need to ‘get their eyes checked’ or ‘learn the rule book’.

2. You Both Have Different Angles On The Play

While you are both watching the same game, you will always have a different angle on the play from the referee.

Your role as a basketball coach extends much further than merely winning games.

Whether you like it or not, as a basketball coach you are a role model to your players. They look up to you.

If they see you being overly angry at the referees, you can bet they won’t be far behind you.

Don’t teach them bad habits. Teach them to stay under control and fight through it mentally when things aren’t going their way.

One of the most important rules on all of my teams is that players never argue with the referees.

As I pointed out in number three, by not allowing your players to argue, it teaches them self-control.

One of the biggest problems I notice in coaches without much experience is that they often get caught up dealing with the referees and forget what their role is in the game.

Your role is to coach. Remember that. Don’t let the referees affect your ability to coach.

6. Adjust to The Referee’s

As long as the referees are making calls consistently at both ends of the floor, it’s up to you to adjust your game plan to their style of refereeing.

For example, some referees allow the players to play tougher in the paint than other referees do.

Everyone’s heard the phrase ‘take what the defence gives you’, right? Well in some ways that rule also applies to referees, ‘take what the referees give you’. Adjust your coaching style to suit the way they’re calling the game.

7. Never Blame Losses on the Referees

Never blame a loss on the referees. Especially to your players.

If they accept accountability, they accept that the other team was simply a better side which will motivate them to improve. However, if they blame the referees for the loss, they have no motivation to improve their game.

Rather, let your players know that the game is not won and lost in the dying seconds of the game. If they had made one extra shot, or one extra hustle play during the first 46 minutes of play, the game would have been out of reach for the other team.

Do you have any other tips for dealing with referees?