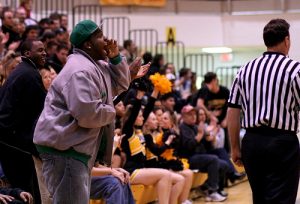 Every year, thousands of coaches all over the world dedicate their time to teaching other parents children how to play the game of basketball.

The majority of parents appreciate this good-natured act, but occasionally you’ll find a couple of people that don’t see it this way. Often the love they have for their child can blind them if they believe their child is being treated unfairly.

Dealing with difficult parents is something we as coaches need to accept will happen once in a while. No one goes through an entire coaching career without ruffling at least a couple of parents feathers.

Before I dive into the solution for how to deal with difficult parents, let’s first look at a technique that will prevent any issues occurring in the first place.

Have a pre-season meeting with all parents and players

I’m not going to go into too much detail of what to include in your pre-season meeting (I’ll save that for another post!), but I want to talk about two very important aspects of the pre-season meeting that relate to difficulties you may have with parents during the season.

A pre-season meeting will let you being to develop relationships with the parents and lets them know that you’re approachable if they ever want to talk about any problems or concerns they might have.

I’ve learned a lot of the time parents are intimidated by coaches and would prefer the coach makes the initial move to developing the coach/parent relationship. Being friendly at the pre-season meeting is the first step towards this. Being an approachable coach is very important.

You see, most of the time when parents storm up to a coach demanding answers out of the blue, it’s because the problem’s been building up for a long time and finally got to a point where they couldn’t handle it anymore. If the parent felt like they could talk to the coach about it prior, this outburst might not have happened.

The second important topic to discuss is how you’re going to distribute playing time among the players. This is a very important topic and is the number one issue that arrises for parents each season.

If you’re coaching youth basketball, let them know that you’re going to distribute all playing time evenly regardless of talent (if that’s what you choose to do).

If you’ve got an older group and are playing basketball at a serious level, let the players and parents know that playing time will be based on talent and work ethic, so some players might not get much playing time in crucial games. If you’re taking this route, make sure to let the parents and players know that during easy games, you will make sure to give the less talented players extended minutes so that they can develop into better players… And make sure you do it!

7 Steps to use if you encounter problems with parents

1. Never talk to someone that’s yelling at you

First and foremost, never talk to someone if they’re yelling at you. You’re giving up your time to help out their kids and deserve more respect than that.

Thankfully, this doesn’t happen too often anyway… But I’ve seen times where parents came down from the stands yelling at the coach and the coach has tried to defend his decisions on the spot. Which, as you can imagine, quickly escalades into a shouting match between the coach and parent.

Rather, if a parent comes up to you frustrated and yelling, in a clam voice let them know that you’d be happy to discuss whatever their concern is when they’ve calmed down.

2. Discuss their problem at a later time

If a parent gets frustrated with you during the game and walks over and demands you talk to them this instant (during the game), kindly let them know that you’re happy to talk to them about it, but they will need to wait until after the game when you can both sit down and talk about it alone, without the other parents or the players watching.

If you don’t have time to talk to them after the game, schedule a meeting with them at a later time.

Scheduling a meeting  for the next day or later is my preferred option. This gives both yourself and the parent time to sit down and think about the conversation prior to meeting, rather than blurting out what ever comes to mind when they’re angry.

But often the parent will insist on not leaving the venue until you have talked to them after the game.

3. Get someone else to sit in on the meeting

I always get my assistant coach to sit in on private meetings.

This can be beneficial in many ways. Such as;

1. Clarifying facts that may arise during the meeting.

2. A witness incase anything happens.

3. To recall comments made in the meeting at a later time if needed.

The parent needs to feel like they’re being heard. If you’re constantly interrupting and disputing their comments mid-conversation, the only thing you’re going to achieve is making the parent much angrier than they already are.

Hear them out and get their complete side of the story before you start adding your two cents in.

The last thing you want to do is make the situation worse than it already is.

You must show the parent that you’re paying attention to what they have to say by using good body language.

Don’t sit back in your chair with your arms crossed. This shows a type of arrogance and stubbornness and will only infuriate the parent further.

Sit forward and look them in the eyes. Nod when they’re speaking to show that you understand.

6. Keep your composure. Even if they don’t

Even if they come in blasting you for reasons you don’t understand, it’s important to make sure you keep calm and talk rationally. You don’t want to get into a shouting match and say something you’ll regret in the future.

7. The correct way to respond

Once you’ve let them have their say, it’s your turn to respond.

The correct way to respond is going to differ greatly every situation. But I’m going to give you a couple of tips I use that help in the response.

Acknowledge their son/daughters strengths before you tell that parent what they need to improve on. For example you may have this conversation… “I understand where you’re coming from. Look, Johnny’s a very good shooter and we’d love to have him out on the floor more to make the most of that. The problem is that he isn’t as strong as we need him to be defensively.”

How have you dealt with difficult parents in the past? Do you have any more tips that could help others?

Let me know in the comments.