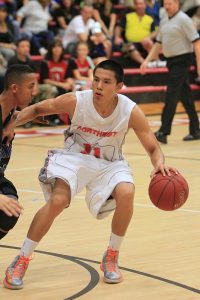 The point guard position is the most important position on a basketball court. Don’t listen to anyone that tells you different.

They are required to do many things in the game of basketball that are very different to the other four positions on the court.

While the other 4 positions are mainly focused on putting the ball in the hoop, the point guard must have a different, more team focused mentality.

Here are the 8 requirements of every point guard:

1. They must lead the team

The point guard is the extension of the coach on the court.

They’re the ones that direct the team and decide which plays the team is going to run. The point guard position is the equivalent of the quarterback in football.

This includes providing encouragement to team-mates and pumping them up before the game. There’s nothing better than team-mates slapping high-fives and shouting words of encouragement at each other. The point guard must be the one that initiates this.

2. They must have a team-first attitude

As soon as your point guard cares more about his own stats than the teams win/loss record, you’re in trouble.

It would be easy for a point guard to dribble down the floor and call the play that will create a scoring opportunity for themselves, but a point guard shouldn’t care about who scores.

The point guards only goal on each possession should be to provide the team with the best opportunity to score. Irrelevant of who is the one shooting the basketball or getting credited with the assist on the play.

3. They must be able to control the ball

The point guard has a lot of things on his mind during the first 8 seconds of an offensive possession. He needs to get the ball down the court with his head up, read the defence, decide on the best play to run depending on the opposing defence, and get his team-mates in the correct positions.

This leaves little time to worry about if you’re going to lose the ball or how you’re going to get by your defender. Which is why dribbling and ball-control skills are extremely important to have if you’re a point guard.

4. They must have a high basketball IQ

The point guard dictates everything that happens on the offensive end of the floor.

This requires the point guard to have a high basketball IQ in order to control the tempo and also to read the opposing defence and know which play will give you the best opportunity to score.

5. They must know where everyone should be during set plays

If your point guard knows where everyone should be on every play it will give them the ability to decide and run the best plays that will exploit the mismatches, or give the person with the hot hand a scoring opportunity.

6. They must have great passing skills

The main requirement of the point guard is to distribute the ball to his team-mates in positions that give them the opportunity to score. This often means tough passes off of a pick-and-roll or being able to get the ball to the post-players on the block.

Great passing skills are essential for all point guards.

7. They must know their team-mates strengths and weaknesses

Again, this comes back to being able to exploit the defence depending on mismatches.

The point guard must be able to utilise the strengths and weaknesses of his or her team-mates.

They need to be able to notice if a certain player has an advantage in the post or off the dribble to call the right play accordingly.

Running a basketball team comes with many great responsibilities. Above all, the point guard must put the team before himself.

I was tempted to include shooting as one of the point guard requirements, but players like Rajon Rondo have proved that being a great shooter isn’t necessarily required when you’re a point guard. It’s great to have, obviously. It can make the game much easier when the defender must honour the shot, but I wouldn’t include it as an absolute must-have requirement for point guards.

Are there any other things you believe are requirements for point guards that I’ve left out? Leave a comment and let me know your thoughts.