Why Positionless Basketball is Important for All Youth Teams 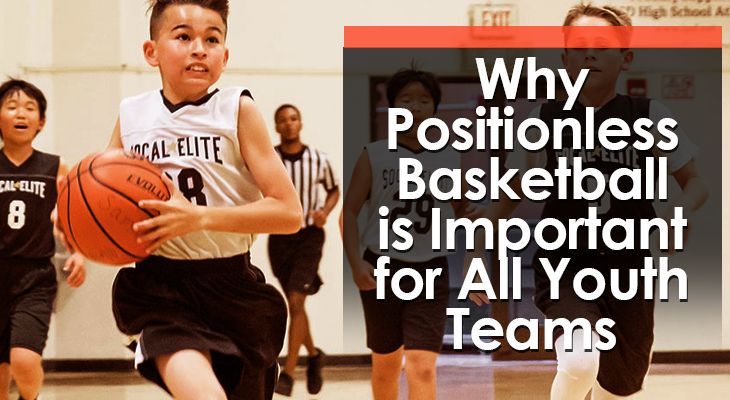 If you’re a basketball coach or fan of the game, the trend towards "positionless basketball" probably hasn’t eluded you.

Gone are the days of narrow and rigidly defined roles.

Today’s basketball belongs to players who have the skills to play multiple positions on the court.

A player who is only able to do one thing will not step on the court often unless they do that one thing at such an elite level that you can't afford not to play them.

Rudy Gobert is a great example of that due to his rim protection, and even he is sometimes glued to the bench because of his limitations.

The modern player is not only expected... but required to be versatile.

Something like that would have been unthinkable just 10 years ago.

But that level of versatility and the ability to play beyond the traditional duties of their position makes these players as dominant as they are.

This is not just limited to big men, mind you...

Kobe Bryant's post game was so refined it could put many centers of his time to shame.

Nowadays, players at the highest levels of competition are expected to be able to play in a positionless system.

And developing these “positionless” players starts in their youth basketball journey.

At these young ages, neither players nor coaches should be concerned with specific positions until at least the high school level.

In this blog post we’ll discuss the importance of positionless basketball and how you can implement it in your program.

Why Positionless Basketball is Important

Many youth coaches still cling to the old practice of forcing players into roles and positions based on their height at an extremely young age.

This is not good for long-term development.

Below, I’ll explain why developing “positionless” players is important:

a. It’s Not About Winning U10’s Trophies

The advantage of putting young players in positions that match their current physical profile is that it puts you in the best position to win youth games and tournaments.

That’s why so many coaches do it.

To those coaches, I’d ask…

Is winning an U10’s tournament really worth limiting the development of your players?

Is beating an U12’s rival really more important than giving players the opportunity to develop skills that will allow players to compete at the next level?

I’m guessing (and hoping) the answer to that is a resounding “no” in everyone’s book.

b. Each Player’s Future Position is Unknown

Just because a 10-year-old is three inches taller than everyone else on the team does not mean he or she will be the tallest player on the team when they’re 18-years-old.

While the shortest kid on the team might become a towering presence after a growth spurt.

There’s no way to predict this.

Scottie Pippen, David Robinson, and Anthony Davis are great examples of tall players who were pretty short until a growth spurt in high school (or even later on in Pippen’s case).

Because they started off as short players, they benefited from their youth coaches developing them as guards instead of imprisoning them in the post.

These skills they develop while playing guard -- such as dribbling, passing, and outside shooting -- stayed with them after their growth spurts.

Combining their guard skills with a big growth spurt led to future success.

Continuing from the previous point...

Choosing not to assign specific positions to young players will allow them to develop a much wider range of skills that will help them in the future.

As players grow up and develop, they will naturally gravitate towards a style of play that works well with their individual strengths and weaknesses.

Allowing them to experience and practice everything is the best way for kids to discover and hone their biggest strengths, while ensuring they have no glaring weaknesses in the future.

Your players will develop their basketball IQ much quicker in a positionless basketball system.

Having your players experience the game from different perspectives will make it much easier for them to spot and understand not only passing, driving, and scoring opportunities, but also things such as spacing, defensive rotations, and much more.

I can’t even count how many times I’ve seen guards and bigs arguing over things like an entry pass to the post because they didn’t understand the other’s perspective.

Not having experienced the other position made it difficult for them both to read the situation.

Once your players have developed positionless skills, it will put you at a great advantage over any team that stuck to traditional positions and roles for their players.

Your tall players will be able to put the ball on the floor and operate on the perimeter against defenders that are only used to defending the post.

Your shorter players will be able to post up against defenders that have no idea how to properly defend in the post because they’ve never experienced playing with their backs to the basket.

This will create matchup nightmares for your opponents all over the court.

And the situation won’t be much better for your opponents on the other end of the court, either...

The experience your players have obtained from playing multiple roles will make reading the offense and switching or getting into the passing lane much easier.

Even situations that you would traditionally expect to result in an easy basket -- such as a center posting up a guard or a guard isolating a center on the perimeter -- won’t be sure things anymore because your defenders are used to these kinds of situations.

Imagine being a 12-year-old who had an early growth spurt and then being told:

That’s not an exciting thing for a youth basketball player to hear.

And yet, that’s exactly what coaches tell young players every day.

(Perhaps not in those exact words, but similar)

For young kids, playing positionless basketball and getting to experience all positions is much more fun than pigeonholing individual players into specific roles.

It also makes substituting much easier for the coach, as you don’t need to worry so much about making sure there are players on the court to fill a specific position. 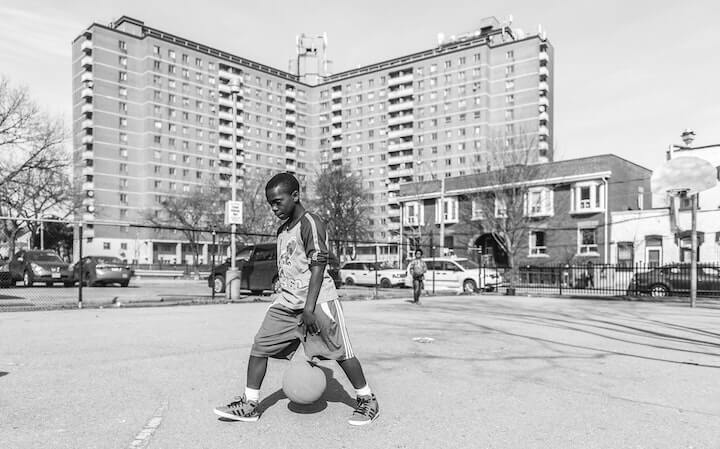 How to Develop Positionless Basketball Players

Now, let’s talk about how you can implement a positionless basketball system.

Positionless basketball is much more than a simple offensive or defensive scheme.

It’s a playing and coaching philosophy.

As such, it requires working on several layers at the same time.

Here are a few useful tips:

The first thing is very obvious but it’s absolutely crucial…

Do NOT define strict roles or positions for your players until they reach the high school level.

And you must allow more than just your smallest players to handle the basketball.

If you want to define some loose roles, define them based on what your players have shown an affinity for and what they seem to be good at rather than on their height alone.

But still make sure your players are working on all skills and get experience in all positions.

b. No Guard-Only or Post-Only Drills

Next, forget about the concept of guard-only drills or post-only drills.

Every player needs to practice every skill in order to round out their game and truly experience the developmental benefits of positionless basketball.

Instead, give all players an opportunity to improve all skills by involving them in all drills.

When it comes to your offense, not all schemes are a great fit for a positionless system.

Rigid offensive schemes such as the Blocker-Mover Offense should be avoided at the youth level because they funnel players into very narrow roles which they can’t stray from.

A motion offense is perfect for a positionless style of play since it emphasizes player and ball movement, screens, and floor spacing.

It allows players to fill multiple roles within the offense on the same possession.

There are plenty of ways to run motion offense, but in my opinion the 5-out motion offense is the best one for a truly positionless style of play.

Most of your sets in a 5-out motion offense will start with all five players spaced out on the perimeter. All five players are encouraged to shoot, drive, cut, screen, post up, etc.

You should also allow your players freedom on the defensive end of the floor.

That means avoiding any kind of zone defense (which is a terrible defense for youth basketball) or any hybrid defenses such as box and one.

Many coaches opt for a zone because it’s easy and very effective in youth games.

Once again, youth coaches are not in the business of winning every single game.

Your goal is enjoyment and developing players as much as possible.

To achieve that, I recommend sticking with man-to-man defense.

Man-to-man defense will give your players ownership and responsibility for their matchups, and it will help them learn proper defensive fundamentals.

On top of that, you can also adjust the specific matchups on the fly to give your players experience with defending different positions.

e. Use Blowout Games to Switch Things Up

Finally, blowout games (winning by 20+) are another valuable learning opportunity.

In situations like these, I encourage coaches to give specific players responsibilities that are outside of their usual comfort zone.

> Give your two tallest players the responsibility of advancing the ball

> Give your shorter players the responsibility of defending the post

If you’ve decided to implement a positionless basketball style in your team, the advice found in this post should put you on the right path.

Just keep the following in mind:

You need to be patient with the "positionless basketball" process.

Deciding to be a coach who develops positionless basketball players is a decision to prioritize development over winning youth basketball games.

When you first start implementing a positionless style, it will be a big change for your players.

Make sure you educate players and their parents on how this change will assist them to develop their skills and how it will ultimately allow the team to win more games.

Early on in the process you might lose a few games that you might have won by using the “terrible tactics” like playing zone defense and giving your starters 90% of the minutes.

Just remember that you’re making an investment towards the future.

If you stick to positionless basketball, your players will have more fun and they’ll be much more likely to achieve success in the future as individuals and as a team.