How to Master the Pump Fake in Basketball (5-Step Guide) 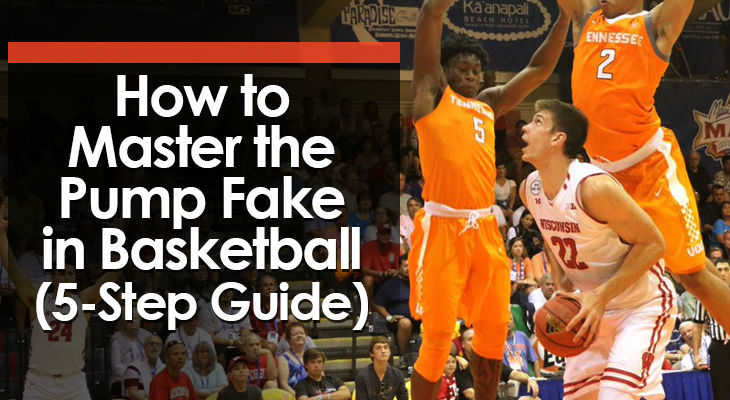 The pump fake is one of the simplest yet most effective moves in basketball.

When you boil it down, a pump fake is simply a fake shot.

But while it sounds simple, its effects can be devastating.

The pump fake has been used in the game of basketball for many years. The reason it's been around so long -- and is here to stay -- is because it’s so effective.

It's great at making a defender leave their feet, allowing the ball handler to either drive past them with the dribble or create space for a better outside shot.

While teaching the fundamentals of the pump fake are relatively simple, mastering the pump fake to the point where you can consistently fool defenders is not easy.

Let's analyze why the pump fake works, when it's best to be used, what it can do for ball handlers, and then I’ll show you how to master it in 5 steps.

Why the Pump Fake Works

The pump fake works really well against defenders who are constantly looking for a shot block.

These defenders will often jump at the first sight of a shot, wanting to give themselves a better chance of recording a block or altering the trajectory of the shot.

To do so, they'll often raise up and leave their feet, or at least commit most of their momentum upward, giving the ball handler the opportunity to create scoring chances for themselves or a teammate.

When to Use the Pump Fake

The beautiful thing about the pump fake is that it’s almost always effective.

Whether the defender actually bites on the fake or not, it never fails to give the offensive team some sort of advantage as the defender is forced to either step closer or raise their body to challenge the potential shot.

It can be used to get an extra step on the defender when attacking the hoop, where you’ll be able to finish inside or pass to a teammate.

Or, if you’re an advanced player, you can create more space for a three-point shot.

The pump fake is effective against a stationary defender or a defender closing out.

The Benefits of a Pump Fake

As said in the previous section, the pump fake gives the offensive player an advantage.

Whether that advantage is big or small will be determined by how the defender reacts.

5 Steps to Mastering the Pump Fake

To truly master the pump fake, you need to consistently add it to your workouts.

Learning how to keep your balance and explode into the next move is crucial for the pump fake to be effective during real games.

The key to a good pump fake is selling it as if you were going to take an actual shot.

Therefore, any good pump fake will start with an action that resembles a normal shot.

To do this, face the basket, bring the ball to the front of your body, making sure you’re in a similar position to the start of your regular shooting motion.

Just like you would when taking a real shot, the next step in mastering the pump fake in basketball is bringing the basketball up toward your forehead.

As this happens, direct your eyes to the basket to make it appear you’re locking in on the target.

Raise your body slightly, but don’t straighten up too much or you’ll lose the ability to explode towards the hoop if your opponent bites on the fake.

Remember, you want the defender to think you're actually about to take a shot.

So you need to bring the ball up in the exact same way.

This the first alteration you'll make to your shooting motion.

As the ball reaches the height of your forehead and your body is raising up, stop the process.

The key is to make sure that you’re still balanced at this point, as your next move will need to be quick in order to take advantage of the defender’s momentum.

If your pump fake causes the defender to jump or raise up, you’ll be presented with an advantage that you must use immediately.

(1) Attack the basket where you can score or pass to a teammate.

(2) Use a dribble to create space for an open three-point or midrange shot.

Even the best pump fakes won't cause the defender to jump every time.

If the defender doesn't jump or overcommit, you should immediately look to pass the basketball to one of your teammates.

There’s no reason to hold the ball and stall the offense.

Sometimes the best thing you can do in basketball is keep things simple.

The pump fake isn't fancy, but it has proven time and again, year after year, in whatever era and style of basketball, that it's incredibly effective.

That's why some of the best basketball players on the planet have mastered the pump fake, and why you should, too.