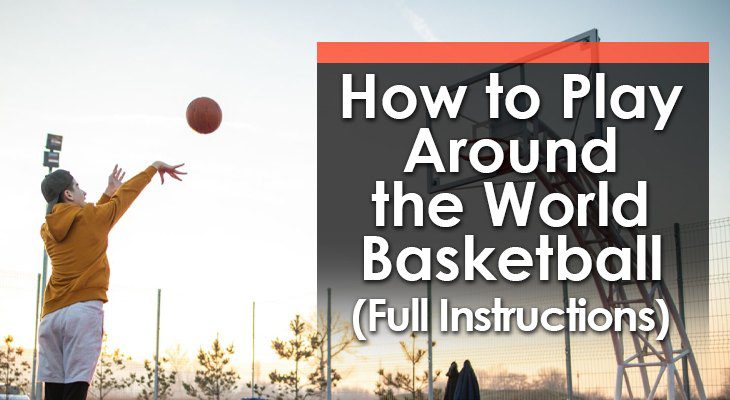 Around the World is a classic basketball game played during basketball practices and on driveways all over the world.

The game works on shooting skills with competition built into the drill, making it a fun game for all ages to play.

Here's a brief overview before we break down the game in detail:

To win the game, a player must make 9 shots from specific spots on the court before their opponent does. Each player can only advance to the next spot after making a shot.

Below are the full instructions and several variations.

How to Play Around the World

9 shooting locations are pre-determined before the game begins.

In the tradition version of Around the World these locations are:

1. The first player starts by taking a shot from one of the low blocks.

2. If they make it, they'll take a shot from the other low block. But if they miss, it's now the other player's turn to shoot.

3. Players start by making a shot from each low block (2 makes). After that, they'll start at either short corner and work their way around the arc. Completing the final 7 shots in the process.

4. The first person to make all 9 shots is the winner!

There are many different variation you can use to mix things up when playing Around the World. Such as...

Skilled shooters can set locations beyond the three-point line, for example. While younger players can make the shots even closer.

b. All or Nothing

If a player misses their first shot, they can choose to take an "All or Nothing" shot. If they choose this option and miss again, they must go all the way back to the starting point.

In the traditional Around the World game, players shoot uncontested shots, taking as much time as they need. While there’s still plenty of pressure in the normal variation, adding a defender can make it feel more like a real game. Defenders cannot block the shot or commit a foul, but they can "run at" the shooter and content the shot from a pre-determined distance.

Around the World is one of the easiest and funnest basketball games for kids out there.

Not only will players have a great time, they'll develop their shooting skills while experiencing pressure as well.

Kids can play it at school, it can be used during practices, and it can even be played on the driveway at home using any 9 spots.