How to Do the Dream Shake in Basketball (5-Step Guide) 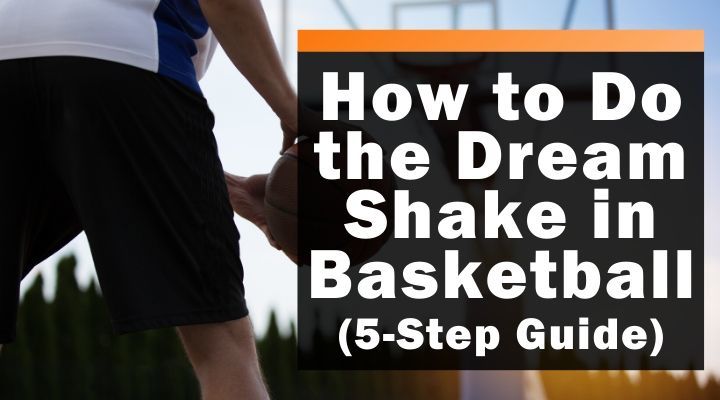 Named after its Hall of Fame innovator, the Dream Shake was popularized in the 1980’s and 1990’s by league MVP and 2-time NBA champion, Hakeem “The Dream” Olajuwon.

Olajuwon used his background in soccer to develop the famous move that is based largely on footwork and deception, and it remains one of the most well known and effective moves in the game today.

Youth players may be more familiar with players like LeBron James, Kevin Garnett, and Dwight Howard for commonly using the Dream Shake to create a number of different scoring opportunities.

The move is meant to set the defender up with a combination of shoulder fakes, pump fakes, and pivoting in order to get an open shot.

What is the Dream Shake?

Though Olajuwon was a center known for scoring in the post, the Dream Shake is unique in that it’s a move that can be used anywhere from the block or further out to the midrange.

It’s also unique in that it’s closer to a set of moves, rather than a single move itself.

This is because it can be used from so many spots as just mentioned, and also because there are a number of variations.

The Dream Shake is a move in which a player catches the ball with his back to the basket, fakes in one direction to get the defender moving that way, and then pivots back the other direction for a scoring opportunity.

How to Execute the Dream Shake in 5 Steps

There are a number of different variations of the Dream Shake, which is part of what can make it such an effective set of moves.

However, regardless of which variation you want to use, the general process of performing the move is the same.

1. Catch With Both Feet on the Ground

No matter where on the floor you want to perform the Dream Shake, the move starts with catching the ball with your back to the basket and with both feet on the ground.

This allows you to use either foot to pivot.

You should catch the ball so that your body is in position to protect the ball from your defender.

2. Shoulder Fake in Either Direction

Once you’ve caught the ball with the defender on your back, make a shoulder fake in either direction.

This fake needs to be convincing enough to get your defender leaning in that direction.

Some advanced players add to this fake by taking a step and showing the ball to the defender at this point - and Olajuwon himself added to the flair of his signature move by flashing the ball out in just one hand - but this obviously adds to the risk of the Dream Shake, and could potentially reduce the speed of the move as well.

3. Pivot Back the Other Direction

Now that the defender is off balance, make a forward pivot in the opposite direction.

This pivot needs to be quick, as the effectiveness of the Dream Shake is based on two quick changes of direction in a very short amount of time.

If the defender really fell for a great shoulder fake, it’s possible that an open shot may be available right away.

However, depending on how the defense reacts and recovers to the initial shoulder fake, the Dream Shake is often combined with pump fakes and/or additional pivots in order to get an open shot.

At this point in the move, there are countless different combinations of fakes and pivoting that could be used, and still be considered part of the Dream Shake.

5. Finish With a Jump Shot or Layup

Especially when the Dream Shake is used from the midrange, the offensive player is probably hoping to create an open jump shot off of the initial shoulder shake, simply because it is more difficult to release a jump shot after pump faking or making an additional pivot.

Or, the midrange player may add an additional shoulder fake if the initial move did not create enough separation.

In the post, the Dream Shake should create an open layup where the offensive player can utilize the backboard to finish.

Tips for the Perfect Dream Shake

Here are a few things to keep in mind when performing or teaching the Dream Shake:

1. Stay Low When Catching the Ball

On the catch, it’s important to stay in a low and athletic position so that you are truly a threat to make a move.

A player who is standing straight up is less likely to execute a fake than a player in an athletic stance.

Staying low will also help the offensive player maintain balance, which is essential when performing the Dream Shake.

2. Catch With Both Feet Down

Whether you catch the ball on the move off a jump stop or from a stationary position, it is crucial to have both feet down.

This gives you the option to make the Dream Shake in either direction without traveling.

The Dream Shake can begin with a shoulder fake in either direction, but choosing which direction to fake will have a lot to do with the effectiveness of the move.

That’s why it’s important to establish contact with your defender on the catch so that you can feel where he is playing you.

Players who are great at the Dream Shake are great at reading their defenders, and using that to get them off balance with the shoulder fake.

The more you are able to mix up the direction, fakes, and location on the floor, the more effective the Dream Shake will be.

5. Keep Your Pivot Foot Down

After the shoulder fake and the forward pivot, it’s important to keep your pivot foot down so that you can use pump fakes, or potentially pivot again.

Don’t assume that your shoulder fake was enough to create a wide open shot and abandon your pivot foot right away.

The Dream Shake has been one of the most famous moves in the game of basketball ever since its namesake Hakeem Olajuwon was dominating the NBA 30 years ago.

It’s a flashy move with a catchy name that players at all levels have tried to mimic for decades - and for good reason.

It requires balance, quickness, and the ability to read your defender.

But when done correctly and in a variety of ways, it can be an effective move to score from a number of places on the court.