1-on-1 Basketball: The 12 Best Moves and Tips to Dominate 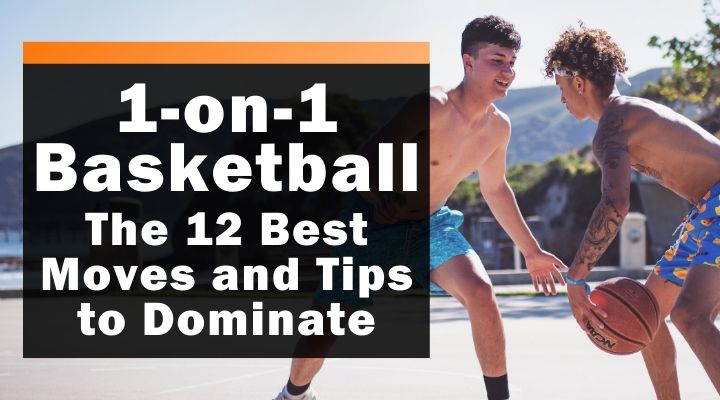 Basketball is a team game that is best to watch when it's played unselfishly by players who are willing to make the extra pass and move the ball instead of forcing a shot of their own.

However, even within the concept of a team offense, there are still many situations which call for players to make 1-on-1 basketball moves to get past their defender.

Even if it works, that does not always lead to a basket for the player who makes the move. It may be just as likely to create a scoring opportunity for an open teammate.

Regardless, any player who wants to be considered dominant must be a threat to put the ball on the floor and make a 1-on-1 move to get past the man defending him.

Why are 1-on-1 Basketball Moves Important?

Though basketball is a team game that is played 5-on-5 for a reason, that does not mean that it’s not still imperative for players to practice and perfect 1-on-1 moves to use within the offense.

Penetrating to the middle of any defense is a great way to create scoring opportunities because it forces the defense to help the defender who got beat, and often makes the entire defense collapse.

Forcing the defense into this difficult situation can create anything from an open layup to a mid-range jump shot to a kick-out pass to an open shooter on the perimeter.

Therefore, players need to develop a variety of moves that they can execute in 1-on-1 situations at game speed.

Twelve 1-on-1 Moves to Dominate in Basketball

In this article, we’re focusing primarily on moves that are designed to beat the defender off the dribble from the perimeter.

But no matter where on the floor you are trying to score from, variety is key to becoming a dominant scorer.

Like any part of the game, if you do the same thing over and over again, your opponent will eventually be able to make adjustments.

Below is a list of moves that every player who wants to be a playmaker and beat his defender should practice and aim to perfect in order to play at a high level.

Perhaps the most commonly known and used move on the basketball court is the crossover dribble.

Get your defender going in one direction with a setup dribble or two, hesitate, and then make a quick and low crossover dribble to your other hand once you have your defender off balance.

This could create a pull up jump shot, or an opportunity to keep driving and create a scoring opportunity for yourself or a teammate.

While the crossover is basic, there are also multiple variations that you can use in 1-on-1 situations, such as:

a. The Iverson Crossover

Named for its Hall of Fame innovator, the Iverson Crossover is a variation in which you take a larger, over-emphasized step to set up the move and bring the ball out wider in order to tempt the defender before eventually crossing over.

This is a riskier and flashier option because it can easily end up in a carry or an easy steal, but can be deadly when executed at a high level.

Tim Hardaway’s version of the crossover can be just as dangerous, but is much different from Iverson’s.

This forces the defender to change directions twice in order to stop the move.

Once you’ve perfected your crossover dribble, it’s time to work on changing directions with a dribble between your legs.

Start the move up the exact same way, but instead of dribbling the ball in front of your body, keep one foot forward and dribble the ball between your legs in order to keep it protected from the defender.

Perhaps an even more deceptive way to change directions and protect the ball is by making that crossover dribble behind your back.

Wrap the ball from one side of your body to the other as quickly as you can to leave your initial defender behind and get to open space.

Getting your defender off balance is one of the easiest ways to beat him off the dribble, and a sudden change of speeds can be a great way to do it.

Just like on the crossover dribble, you want to set your defender up with a power dribble or two in one direction, and then quickly slow down while keeping your dribble alive.

This is the point where you may want to use the crossover (or another move that requires a change of direction) but the hesitation may be enough to beat your defender.

Once he slows down, explode towards the basket with another dribble in the same direction to get to the middle of the defense.

Another great counter move to the basic crossover is the in-and-out.

After you set up your defender and make your hesitation, fake the crossover by bringing the ball to the center of your body.

Then, push the ball back to the outside of your body, and continue to power dribble in the same direction.

Set your defender up in one direction with a power dribble or two, plant your inside leg to establish a pivot foot, and then spin back the other direction to get past your defender.

The spin move is a great way to change directions while still using your body to protect the ball. When done under control, it can be a strong, physical move that slices into the defense.

While several of these moves may create multiple different scoring opportunities, the Euro step is most often done with the simple goal of getting a layup for the ball handler.

Get your defender going towards the rim with a dribble or two, take a step in one direction and plant your foot, pick the ball up, and then take another quick step in the opposite direction while bringing the ball up to shoot a layup.

The Euro step can be a difficult move to perfect without traveling, but is very deceptive when done correctly.

When trying to beat a defender 1-on-1, it helps to know which way your defender thinks you’re going. One great way to find this out is with a simple jab step.

From a stationary position, take a quick fake step with your non-pivot foot. Then make your drive in either direction, depending on how your defender reacts to the jab step.

It may not be the flashiest play on the basketball court, but a simple shot fake can get your defender off his feet and give you all the time you need to get past him.

Catch the ball on the perimeter, bring the ball up above your head to simulate your real shot, and then rip it through to get past your defender once he has jumped to challenge your shot.

While most 1-on-1 moves are meant to get by your defender, the step back is used to get away from your defender.

Get your defender going towards the rim with a power dribble or two to sell that you are attacking for a layup, plant your front foot, and take a big step back to land on your back foot.

This should hopefully create an open jump shot, but could also open up another opportunity to drive towards the hoop again if the defender jumps out at you.

Tips to Improve Your 1-on-1 Basketball Moves

Now that we’ve established a number of moves that can help you dominate, what is the best way to actually work on perfecting them?

1. Play King of the Court

The easiest way to work on your 1-on-1 game is by using a breakdown drill that includes a lot of opportunities to face an individual defender.

King of the Court is essentially a continuous 1-on-1 game with make-it-take-it rules.

To get the ball, a player must get a stop - otherwise, a new defender comes in.

This gives players a chance to make moves against multiple defenders of different sizes and skill levels, and also forces them to mix in a variety of moves if they want to keep scoring.

2. Practice a Variety of Moves

Like just about anything on the basketball court, 1-on-1 basketball moves will not be as effective if you do the same thing every single time.

No matter how good you are at one individual move, eventually, defenses will be able to make adjustments to stop you.

Whether it is during an individual workout with no defense or a 5-on-5 full speed situation, it is important for players to work on multiple moves to get past their initial defender.

Penetrating into the middle of a defense to create a play is one of the most important skills that a basketball player can have - and it’s also one of the most difficult to do at a high level.

This means that not every player should be going into a live game scenario and trying to embarrass his defender with an Iverson Crossover or a step back jump shot.

Breakdown drills like King of the Court mentioned above are great for working on your 1-on-1 moves, but basketball games are not played 1-on-1.

Once you’ve practiced some of those moves in isolated situations, try working them into opportunities in 5-on-5 pickup or practice games as well before you’ll be ready to do them at a full game speed with help defenders.

One of the keys to beating your defender in a 1-on-1 situation is to get him off balance.

And one of the best ways to do that is to change speeds within your move.

No matter which move you’re using, practice setting up your defender slowly, and then exploding towards the rim.

This sudden change of speed is difficult for defenders to react to, and can create all the space you need to penetrate the defense.

It is typically easier to beat your defender off the dribble if they are up guarding you closely, and the easiest way to keep your defender from sitting back and anticipating your move is by being a threat to shoot from outside.

If you are capable of knocking down three pointers, defenders will have no choice but to go out to the perimeter and guard you.

Practicing your shooting on a regular basis will ultimately also make it easier to make plays off the dribble.

Even if your 1-on-1 move is perfect and you get past your defender into the middle of the defense, it will not matter if you’re unable to make a good decision when you get there.

Especially for younger players, one way to work on making good decisions after a successful drive is to come to stay on two feet as long as you can.

This ensures that you are under control, and also gives you more time so that you do not have to decide whether to shoot, pass, or continue towards the basket while you are in the air.

Any great perimeter player needs to be able to use a variety of 1-on-1 basketball moves to beat his defender off the dribble and create scoring opportunities.

However, few players are actually prepared to execute those moves at a high level when it comes time for real game action, which means that not everyone should be trying to make isolated 1-on-1 plays to attack the basket.

Players must first work on those moves in breakdown drills and practices, develop the skills to be a threat to score from multiple spots on the floor, and ultimately make good decisions with the ball in order to be dominant in 1-on-1 situations.