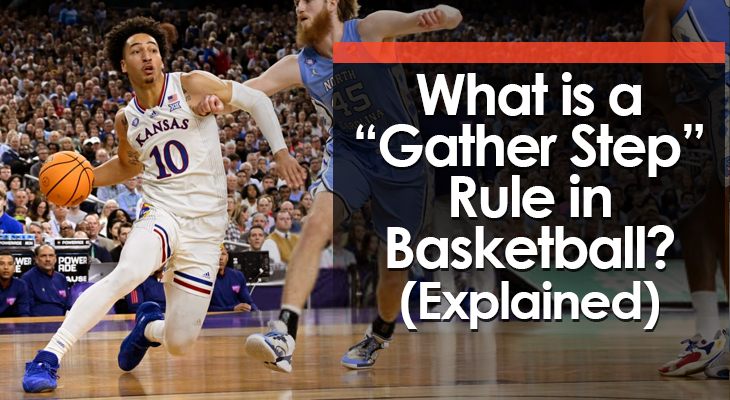 Perhaps there’s no louder criticism of the NBA than the incessant complaint that players are allowed to travel whenever they wish in the name of flashy dunks and SportsCenter highlights.

I won’t deny that the traveling violation should probably be called more in the NBA, but in recent years the implementation of the “gather step” rule has made what appears to be a travel, legal.

Also called the “zero-step,” this new rule confuses many players and fans.

To make things even harder, the breakneck pace of basketball at the professional level makes it incredibly difficult to process without going back and watching the play frame by frame.

In this article we’ll try to clarify what constitutes a gather step and why you can stop yelling at LeBron James and James Harden for getting away with traveling violations over and over again.

What is a Gather Step in Basketball?

A gather step refers to an extra third step that a player can make after picking up their dribble.

In the NBA the count begins with the first step taken after a player has stopped dribbling.

This first step is often referred to as the “zero” step, with two additional steps being allowed afterward.

This means the pivot foot technically can hit the ground before the ball is either shot or passed without a travel being called.

What Leagues is the Gather Step Legal?

Contrary to the popular legend that NBA players travel constantly, the gather step is legal in the NBA, providing players with that extra third step that often sends fans and sometimes even coaches and players into hysteria.

While traveling is unfortunately missed in some cases, there’s a big difference between this, and a legal gather step (shown in the video above).

The NBA clarified the concept of the gather step before the 2019 season and technically made it legal while FIBA legalized the move the year prior.

What can make this rule confusing for young players is the gather step is considered a travel at the high school and college level, much to the chagrin of some coaches.

In these lower levels, the first foot to touch the floor after the dribble has been picked up is the pivot foot. It can only come off the ground to release the ball and will be called a travel if it touches the ground while the ball handler still has possession.

The gather step rule change has been utilized by a diverse range of professional players in several unique ways.

Giannis is so long and coordinated, that giving him the benefit of a gather step without dribbling allows him to pick up his dribble as far away as the three-point line and still reach the rim.

Check out the drive at the 1:40 mark in the above video where he manages to go from the top of the arc to the rim in two-and-a-half steps.

No one has made the 0-step more controversial than The Beard, James Harden.

Harden uses the gather step not to get to the rim, but to create separation on his step-back jump shot. The interpretation of what constitutes a “gather” in these situations has created something of a Pandora’s Box for the NBA.

Many would argue this is an illegal move, even under the gather step provision. And boy do some of these look like a travel when you’re watching live.

The principle is the same as the Giannis drives however...

The difference is Giannis gets to the hoop so quickly and through traffic so we’re not watching his steps as closely.

Harden on the other hand, is using the gather step on the perimeter in isolation where that extra step stands out clear as day.

We’ve also grown up with it ingrained in our minds that any third step should result in a traveling violation.

It seems unfair for a player to cover that much ground without the ball touching the court. But by the letter of the law, what Harden is doing here, at least by NBA and FIBA rules, is legal.

What About the Euro Step?

There’s also the Euro Step, which shares a lot of similarities with the new gather step.

The Euro step has a loose definition as a horizontal jab with one foot before pushing off in the opposite direction to get around a defender, usually at the rim.

Manu managed a lot of these under the old rule interpretation, mastering the “two-and-a-half step” drive which allowed him to create a tremendous amount of space in the paint to get off his floater or layup.

Nevertheless, you can still hear shouts for “travel” at the 0:53 mark of the above clip.

The footage is grainy, but you can see the foundation for the gather step in Ginobli’s drive.

It’s hard to tell exactly when he picks up his dribble, but his ability to get from the top of the key to the rim in a couple of strides is impressive.

The line between a traveling violation and the newly interpreted gather step at the professional level is awfully small.

Add in the incredible pace that the game is played in the NBA and FIBA, and it can take a frame by frame breakdown to determine if that James Harden step back was legal or not.

Along with the saturation of three pointers and an overall increase in pace, the gather step has been instrumental in the skyrocketing offensive efficiency in the NBA.

The result being, one could argue, a more entertaining brand of basketball to watch than an unending parade of post-ups and fallaway jumpers.

But until these rules are implemented in the high school and college ranks, there is little young players can learn from watching their favorite athletes pull off moves that would be called a turnover if they attempted it.