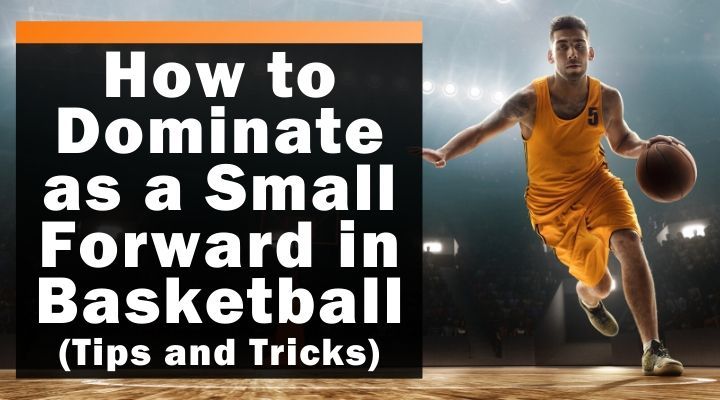 The small forward, who is often referred to as the “three”, can be one of the most important roles on a basketball team.

The ideal small forward is typically a player who is bigger and stronger than the point guard and shooting guard, but shorter and quicker than the power forward and center.

This player will primarily play on the wing offensively, they will be asked to do a number of different things on the defensive end of the floor to benefit the team.

5 Traits of a Dominant Small Forward

Although every player wants to do "a little bit of everything" to help the team -- especially as today’s youth watch players like LeBron James, Kawhi Leonard, and Kevin Durant dominate the game -- not all players are suited to play the position successfully.

So, what characteristics can make for a dominant small forward?

Perhaps the most important trait that every great small forward must possess is the ability to do multiple things for the team.

They are not the primary ball handler, but must still be a good dribbler.

They are probably not the first option to post up within the offense, but must still be able to play with their back to the basket in the post.

They may not be the leading scorer, but must still be able to shoot from the outside and create driving opportunities.

Players who can only drive and are no threat to shoot or players who only stay outside to shoot threes are rarely considered great small forwards.

The small forward is stereotypically the most athletic player on the team, which is why they are capable of doing so many things.

Skills like speed, strength, agility, and quickness are useful at any position on the court, of course, but the player who possesses those skills at the highest level will typically make a great small forward.

Of course, the most athletic player on the team may not always be the small forward.

The ideal small forward couples the athleticism mentioned above with the length and size that allow them to be so versatile.

Typically, they will be taller and stronger than the point guard or shooting guard, but shorter and leaner than the power forward or center.

Because the small forward is expected to do a number of things for the team, one of the most important traits of the position is being able to anticipate which play to make, and when.

This may also be commonly referred to as ‘Basketball IQ.’

> When is the right time to shoot the three pointer?

> When should he drive to the basket and score?

> When should he drive with the intention of creating opportunities for a teammate?

Like any position on the court, instinct is the trait that commonly separates a “good” small forward from a “dominant” one.

This is a difficult trait to teach, but we will talk more below about how players can work on improving their instinct.

The small forward is usually not the player with the ball in his hands the most, as the point guard is tasked with bringing the ball up the court and initiating the offense.

However, they will still be expected to be able to handle the ball at a high level, both on the perimeter and while slicing into the lane.

They are also unlikely to be isolated as a scorer in the post, but they will still be expected to play physical in the lane and to score with their back to the basket if the opportunity is there.

Any player who is not the primary ball handler or scorer, but is still expected to do both of those things at a high level, must be selfless in order to truly be great at the position.

The Roles and Responsibilities of a Small Forward

The small forward is expected to be versatile and to do a little bit of everything.

But what does that mean, exactly?

Even though they can make plays in many different ways, it’s equally important to realize that this does not mean having the ball at all times, taking all the shots, or forcing something to happen every time they get the ball.

So, what are the specific responsibilities of a great small forward?

a. Driving to Score

Perhaps more than any player on the court, the small forward is expected to be able to drive to the basket and score.

Because no offense can thrive on just throwing the ball around the perimeter or only working through the post, slashing into the lane and scoring at a high level is probably their most important responsibility.

Especially at the youth level, driving to score is important for the because it may not be a strength of the other players.

The smaller guards - the “ones” and the “twos” - may not be strong enough to get into the lane or long enough to score if they get there.

The larger and slower post players - the “fours” and the “fives” - may not be quick enough to create their own shot off the dribble.

Attacking the rim and forcing the defense to collapse is important within just about any offense, and that often starts with the small forward.

b. Driving to Create for Teammates

While dominant small forwards often drive with the intent of scoring with a strong finish at the rim, it is equally important that they can put their teammates in opportunities to score as well.

Defenses will be prepared to help when that player drives to the lane, which will leave teammates open on the perimeter, and a great small forward is able to see the floor and distribute.

It is great to have a small forward that is big, strong, and athletic enough to get into the lane and score...

But if they are not also able to have vision of the court and pass to open teammates, eventually the defense will adjust to stop a one-dimensional player.

c. Forcing the Defense to Extend to the Perimeter

While a great small forward is dangerous when putting the ball on the floor and attacking the basket, that will eventually become easier to defend if they are not also able to knock down an outside shot.

If they are only a threat to drive, the defense will collapse into the lane when they have the ball, limiting opportunities not only for themselves, but for the entire offense.

Being a threat to make three pointers limits which defenders can guard a small forward, it forces the defender to cover more space, and it opens driving lanes for everybody else on the court.

d. Handling the Ball on the Perimeter

Though the small forward is not the primary ball handler, they still primarily play on the wing and are considered a perimeter player.

This means they are able to help the point guard and shooting guard handle the ball and find a good shot within the offense.

In late game situations where ball control and limiting turnovers is most important, a dominant small forward is able to help the other two guards control the ball.

Of course, being a strong ball handler will also help a small forward attack the basket, as well.

e. Defending the Best Athlete on the Other Team

While we have focused on offense to this point, we have established that the small forward is oftentimes the most athletic player on the team.

Of course, this means they will oftentimes be responsible for guarding the most athletic player on the other team.

In many cases, this may actually be the most important responsibility of the small forward.

While other players may be able to handle the ball or make shots, they may not be physically capable of guarding the most athletic player on the other team.

Again, this is a role of the small forward that requires selflessness, as it is not easy to guard the other team’s most athletic player in almost every game.

Even though the small forward is considered a perimeter player, they also have the responsibility to rebound along with the power forward and the center.

Point guards and shooting guards may still be expected to rebound as well, but it is rarely a huge strength at those positions.

Therefore, the small forward must also be able to rebound on both ends of the court.

Otherwise, there would really only be two post players responsible for the boards.

4 Tips for a Small Forward

Now that we have established what characteristics can make for a strong small forward and the specific responsibilities of the position, how can a player improve in those areas?

As mentioned above, athleticism and strength are both key.

While some of that is genetic or natural and of course height can not be trained, quickness, agility, and strength are all certainly skills that can be improved.

2. Work on Shooting Every Day

While a great small forward has the ability to slash into the lane and make athletic plays for himself or his teammates, any player that is not a threat to score from the outside eventually becomes much easier to defend.

The ability to spread the floor and force the defense to extend and guard on the perimeter is oftentimes the skill that separates a player who is just a good athlete from a dominant one.

In order to be a truly dominant small forward, you must be considered a good shooter.

And becoming a great shooter requires thousands of repetitions over many seasons.

Any player who wants to be great should be doing drills that break down individual situations that occur within a game, and it's important that these breakdown drills force the player to make a decision.

Because the small forward is expected to do a wide variety of things, he must practice when it is appropriate to drive, shoot, or pass to a teammate.

One simple option is a 2-on-2 breakdown where the player catches the ball on the wing and then must react to both an on-ball defender and a help defender who is in the lane.

If the on-ball defender sags off, the player takes the shot.

If the defender takes the three-point shot away, the player drives and then must make a decision to score or pass, depending on the help defender.

Although it is difficult to teach a true ‘Basketball IQ,’ breakdown drills that encourage decision making will at least help a player anticipate during real game situations.

Breakdown drills will help a small forward practice when to shoot, drive, or pass, but ultimately nothing will truly mimic a real game situation like playing at full speed.

Because instinct is such an important trait, it is important to play a lot of full-court, 5-on-5 games in order to practice reacting to different defenders and different situations.

Many players want to have a chance to handle the ball, shoot from the perimeter, score off the dribble, and guard the other team’s best player... but few are actually capable.

A dominant small forward has to combine size and athleticism with instinct, ‘Basketball IQ,’ and a wide mix of basketball skills, which is a combination that not many players possess.

However, a long and athletic player who trains to improve their physical skills and is also able to make a variety of plays has the potential to become a dominant small forward, which can ultimately be the most important piece of a good team.