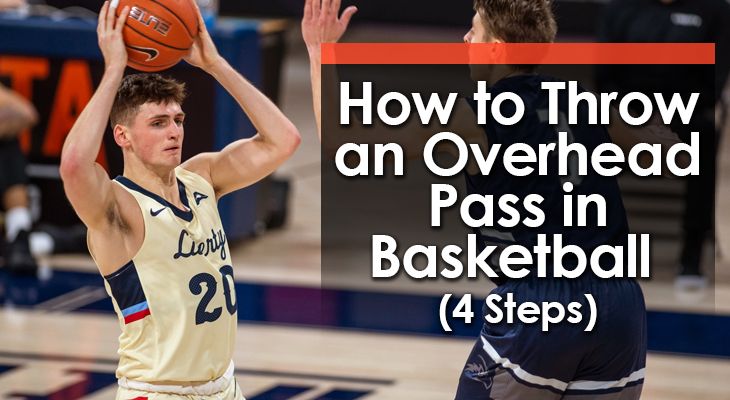 While not as common as the chest pass or bounce pass, an overhead pass is a necessary alternative that can and should be used in specific situations.

Overhead passes are sometimes used to "slingshot" the ball further than a typical chest or bounce pass, and are also regularly used when guarded closely by a defender.

The text below will help you figure out the right situations in which to throw an overhead pass, and we'll also go over the correct technique.

How to Throw an Accurate Overhead Pass

Especially for younger players, it can be difficult to determine which type of pass should be thrown in which situation.

Here are 3 examples of times throughout a game where an overhead pass is a good idea:

a. To throw over a tight defender

If a defender is close enough that you’re unable to throw a chest pass or bounce pass, your only option may be to pass the ball directly over the defender’s head.

b. When you need a powerful, long throw

Another common situation where players should use an overhead pass is when they need to make a long pass down the court.

This may be after a rebound or turnover when your team is looking to fast break, or it could be after the other team scores and you’re making an inbounds pass.

Either way, the overhead pass can serve to get the ball up the court much quicker than by dribbling or throwing a shorter pass to a closer teammate.

c. To make a “skip pass" across the court

Overhead passes can also be used when you are passing the ball from one side of the court to the other within a half-court possession.

This typically means the ball needs to travel over multiple defenders, where a chest pass may be intercepted and a bounce pass isn't an option.

The overhead pass is preferred because it has more arc and more power so it’s not as easily deflected or stolen by the defense.

Step #2 - Use the correct technique

Here's what you need to remember when throwing an overhead pass:

(1) The ball will start at your chest or above your head.

(2) Take a step toward the teammate who is the intended recipient of the overhead pass -- preferably with your dominant foot, but it depends on which is your pivot foot.

(3) After planting the foot that takes the first step, push off the back foot to create enough power to throw a long pass across the court

(4) Step forward with the back foot, release the ball forward, and follow through.

Step #3 - Throw to where your teammate will be, not where they are right now

In many of the situations detailed above, it's likely that your target is moving.

If you're being closely guarded and have picked up your dribble, your teammate could be running towards you or to a different spot on the court in order to get open.

Or, if you're making a long pass down court, your teammate may be sprinting away from you in order to beat the defenders who are quickly transitioning back.

Whatever the situation, it's important to pass the ball to where you want your teammate to catch it, not to where they are standing at the moment you are releasing the pass.

This is something that can be difficult to grasp for younger players, but will only improve by practicing and using overhead passes in full-speed situations.